Plants Turn Caterpillars Into Cannibals To Save Themselves 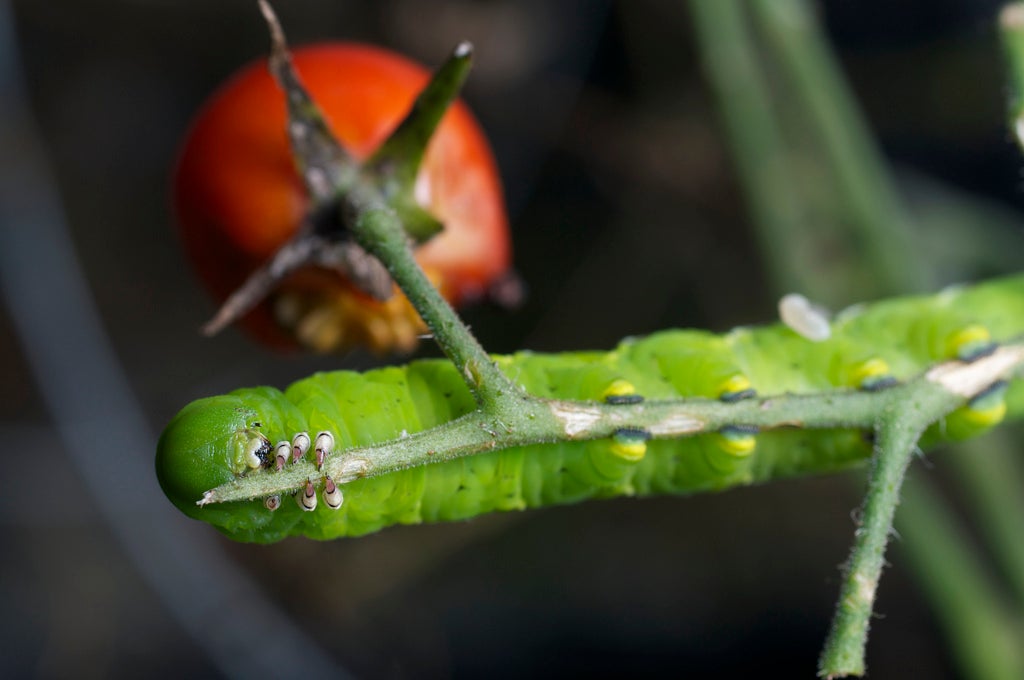 In the caterpillar-versus-plant fight, the winner might seem obvious. One side sits motionless in the sun, while the other feasts on it. But the tomato plant has a nefarious defence strategy. In some encounters with herbivores, it winds up relatively unscathed, while the caterpillars wind up eating each other.

Researchers have long known that plants have myriad ways to protect themselves from predators, but a newly-discovered method ranks among the most disturbing: Somehow, tomato plants seem to be pushing hungry insects to cannibalism. This finding could have important implications for agriculture — after all, if the insects are eating each other, they're not eating the plants.

"It's a novel way that plant defences alter the choices that animals make," study author John Orrock, associate professor at the University of Wisconsin-Madison, told Gizmodo. "The consequences seem to benefit plants. They change their chemistry to be less attractive in our experiments. And because they become less attractive, other insectivores become more attractive. By becoming less tasty, the menu options for caterpillars change."

The defence Orrock and his colleagues identified lies in a chemical called methyl jasmonate. When caterpillars eat tomato plants, it seems that the plants release this chemical as a signal. The chemical might blow over to other plants to warn that some pests are in the area. The bugs end up eating each other instead of the plants, according to the research published today in Nature Ecology and Evolution.

"By becoming less tasty, the menu options for caterpillars change."

Scientists tested this hypothesis by spraying tomato plants with different levels of methyl jasmonate — from none to a lot — then plopping eight caterpillars onto each of 40 plants. After around eight days, the caterpillars had pretty much all eaten each other, regardless of which plant they started on. But the caterpillars on the plants sprayed with more of the chemical decided to eat each other way sooner, and there was about five times more tomato plant remaining, according to the study.

"To my knowledge, this is the only study that shows when you have a plant that's received the chemical and one that hasn't, it changes the likelihood that the caterpillars would eat each other," said Orrock.

The paper doesn't specifically mention what causes the cannibalism, and Orrock doesn't want people to think that plants emit some zombie-inducing chemical. Instead, he supposes that the chemical is a signal to tell plants to alter their nutrient content somehow, so that the other caterpillars seems like a smarter food choice.

While one researcher, Gary Felton from Penn State University, thought the study was too preliminary to be compelling, others were quite impressed by the paper and its implications. "I think it's an exciting paper," Richard Karban, a professor at the University of California-Davis told Gizmodo. "We know that the response of plants to herbivores is pretty much ubiquitous," but they know less about the specific mechanisms that produce the results we see, such as cannibalism. "So this is a really cool story because it provides a new mechanism." In the future, Karban would like to see the researchers study whether the defence helps increase yield and whether more caterpillar cannibalism also means more tomatoes.

An agroecologist from the Department of Natural Resources of the Volcani Center in Israel, Asaf Sadeh told Gizmodo in an email that the paper makes an important contribution to understanding plant-insect interactions. He added some potential caveats, too: Mainly, caterpillars may move on to other types of plants if the tomato plants become less nutritious. He also pointed out that we already knew cannibalism is a common last resort for hungry animals.

But that doesn't invalidate the significance of the new work — in fact, Sadeh said the contrary. If this defence worked best when there were only plants of a single species around, it could have agricultural benefits, especially if increased cannibalism spread pathogens among the insects. "The paper leaves me wondering if some combination of plant defence priming and application of pathogenic biocontrol agents could yield more effective pest suppression without the use of harmful chemical pesticides," he wrote. In other words, maybe farmers can use this plant defence instead of nasty pesticides to keep insects off of their crops.

It's important to keep in mind that this was a study in a lab, not in the wild. Orrock said if he had a magic wand, he'd do a large-scale study to see how this effect manifests itself in the wild, and to study it on species other than just the tomato.