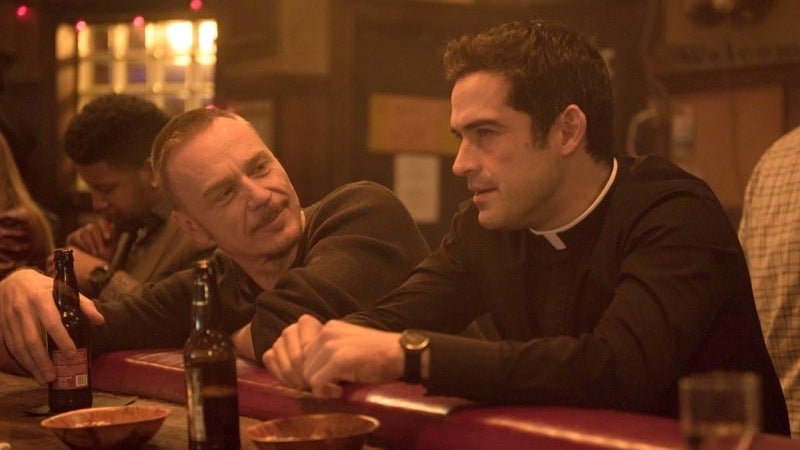 After making fans wait nearly half a year to announce The Exorcist's renewal, Fox has finally begun to reveal details about season two — including some juicy casting news, where the show will be set, and hints about what new demonic menace awaits now that Pazuzu's been dealt with.

As we already knew, some of season one's main characters — including Geena Davis' Regan MacNeil — will not return. The show will leave her story behind in Chicago and follow its evil-vanquishing priests to the Pacific Northwest, where they will pursue a brand-new case. Deadline reports:

Season 2 picks up with Father Tomas Ortega (Alfonso Herrera) and a newly collarless Marcus Keane (Ben Daniels) out of Chicago and on the road, searching out evil. Across the Atlantic, Father Bennett (Kurt Egyiawan) attempts to weed out those within the Vatican who have turned against God. Ultimately, Tomas and Marcus are led to Andrew Kim (John Cho), a former child psychologist who runs a group home for five at-risk foster children on a secluded private island off the coast of Seattle. When one of the children under Andrew's care is targeted by a powerful force, the two priests head west, setting themselves on a collision course with hell.

While we learned a few days ago that John Cho (Star Trek) was joining the cast, Deadline also revealed today that Brianna Hildebrand — Deadpool's Negasonic Teenage Warhead — will play the tough-kid-with-heart who's the oldest among Andrew Kim's charges. The rest of the new cast has yet to be announced — presumably, some younger children will join the mix — but Cho and Hildebrand are both intriguing additions. It took almost all of season one to establish the team-player dynamic between devout-but-easily-tempted Father Tomas and ex-Father Keane — excommunicated unfairly, though his disgust with corruption in the Church kind of turned him into an anti-establishment crusader anyway. It will be interesting to see how The Exorcist further develops their friendship as they tackle this new situation — and also to see how Father Bennett fares in his detective work in the wake of the assassination attempt against the Pope.

So far there's no word on when The Exorcist — one of last year's biggest surprises, in that it somehow overcame the obvious stigma of being spun off from one of the greatest horror movies of all time, and ended up being totally entertaining on its own merits — will return for season two, but we will surely have more details after next week's San Diego Comic-Con.