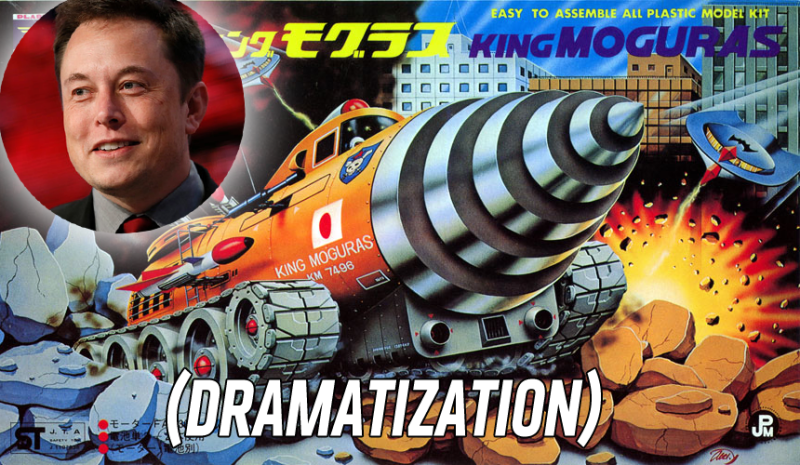 Elon Musk awoke today with the intention of sending Twitter into a frenzy by declaring that he received "verbal govt approval" to build a Hyperloop in the densest part of the United States, between New York City, Philadelphia, Baltimore, and Washington D.C.

But who knows! Electrek already sort of declared this a done deal, so maybe I really am just a cynical hag. Maybe — maybe!!!! — Elon's had this in the works for months, and this isn't a literal pipe dream.

To be absolutely certain that he's not blowing smoke, I reached out to spokespeople from every public agency I could think of that might have a hand in approving this sort of thing. Here's what they said. (I'll update the post if more comments come in.)

I don't have anything on that. I'd have to check with somebody here.

We don't have a comment at this point. Do you know, or can you find out, from which agency in the US government Musk got his "verbal approval?"

No, we are not aware of it. And I don't know if we have a comment on that. But I can check on that for you.

Update, 1:35 p.m.: Ron Holzer, a spokesperson for the WMATA, reached out to say the agency has nothing to do with this project:

This is not related to Metro, which provides local transportation services in the National Capital Region, not inter-city transportation. As such, we do not have a reaction for you.

Thanks for your email. I will be out of the office on Thursday, July 20, returning on Monday, July 31. I will respond to your message at that time ... Thanks and enjoy your day!

Update 1:46 p.m.: The DOT decided to refer comment to the White House on this one, which definitely signifies that this is moving at a rapid clip. In a statement, a spokesperson for the White House said:

We have had promising conversations to date, are committed to transformative infrastructure projects, and believe our greatest solutions have often come from the ingenuity and drive of the private sector.

Update, 1:42 p.m.: I reached out to the mayors of each community Musk mentioned, but none have responded just yet.

Update, 1:55 p.m.: NY's mayor hasn't responded yet, but his press secretary said this on Twitter:

This is news to City Hall. https://t.co/GmEm0b5C4i

Meanwhile, Mike Dunn, deputy communications director for Philadelphia's mayor, had this to say:

Update, 2:07 p.m.: We now have word from NY City Hall, and it reaffirms what the press secretary said on social media. Ben Sarle, deputy press secretary for the mayor, said in an email:

"Nobody in City Hall, or any of our city agencies, has heard from Mr. Musk or any representatives of his company."

This is the first we heard of it too, but we can't wait to hear more.

A reporter for the BBC suggested to Musk that it would seem "premature to announce" the project with only a verbal agreement, which is how things normally work. Maybe, the reporter asked, you're just trying to drum up support? Indeed!

Support would be much appreciated!

We need better transit infrastructure in this country, no doubt. But using a bullhorn to suggest you've received approval — of some sort — to build a project that's centered around a futuristic transit system that hasn't even been tested at a large scale yet is insane.

Still a lot of work needed to receive formal approval, but am optimistic that will occur rapidly

Germain Lussier 21 Feb 2020 4:40 AM
When season two of Westworld ended back in April 2018, it felt like season three would never come. 2020? That was a million years away. Well, that time has finally passed. 2020 is here, Westworld season three is coming, and a new trailer hammers the point home in as epic a way possible.