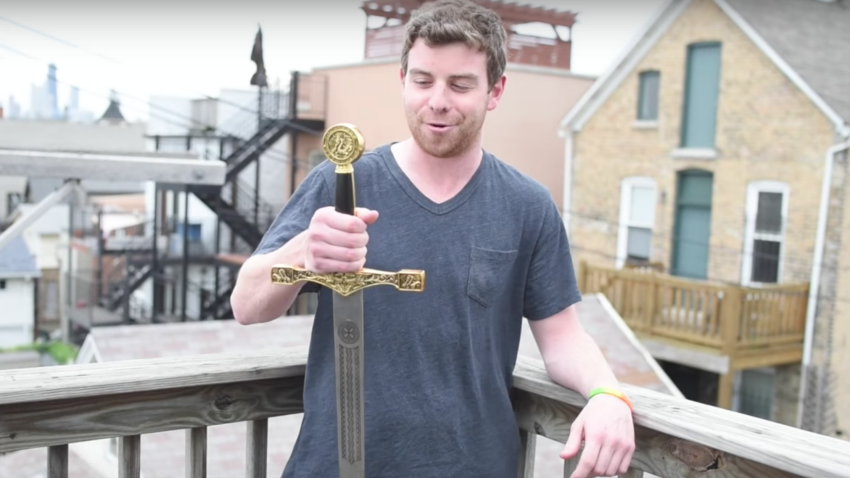 When Chicago software consultant Mac Dolan heard the screams of a friend being attacked, he knew he had to step in. So he grabbed his most fearsome weapon: A $US100 ($130) sword he'd bought from Medieval Times.

A strange man had somehow broken into the apartment Dolan shared with his roommate John Zuercher and started physically assaulting a woman crashing on their couch. Luckily, Dolan and Zuercher had visited Medieval Times, a medieval-themed dinner theatre, six months earlier for the latter's birthday, where they decided to purchase a giant sword to hang on their wall.

"We hung [the sword] in the wall equidistant between our bedrooms, so whoever gets there first can use it," Dolan told the Chicago Sun-Times.

Dolan said he started yelling and running at the man attacking his friend, but the guy didn't flee until Dolan ran up to the wall and grabbed his sword, chasing him out of the apartment. Dolan did take a swing at the man as he fled, but he ducked and Dolan dented the wood railing instead. To explain exactly why they bought the sword, Zuercher said, "We're Game of Thrones guys." Well, it might not have been Valyrian steel, but it did the job.

During the escape attempt, he dropped his wallet, which Dolan and Zuercher turned in to the police. The man turned out to be 39-year-old Francisco Chavez, who was arrested after he showed up to a police station claiming he'd been robbed and his wallet was stolen. He's been charged with home invasion, attempted aggravated criminal sexual assault, and aggravated criminal sexual abuse. But, it could've been worse had Dolan not stepped up, sword in hand, to help a friend.

So if someone ever gives you a hard time about being a huge nerd, tell them about Dolan and Zuercher's heroism — because sometimes, it takes a huge nerd to be a hero.