Conversations With God: How Chris Obi Deals With (Playing) Death On American Gods 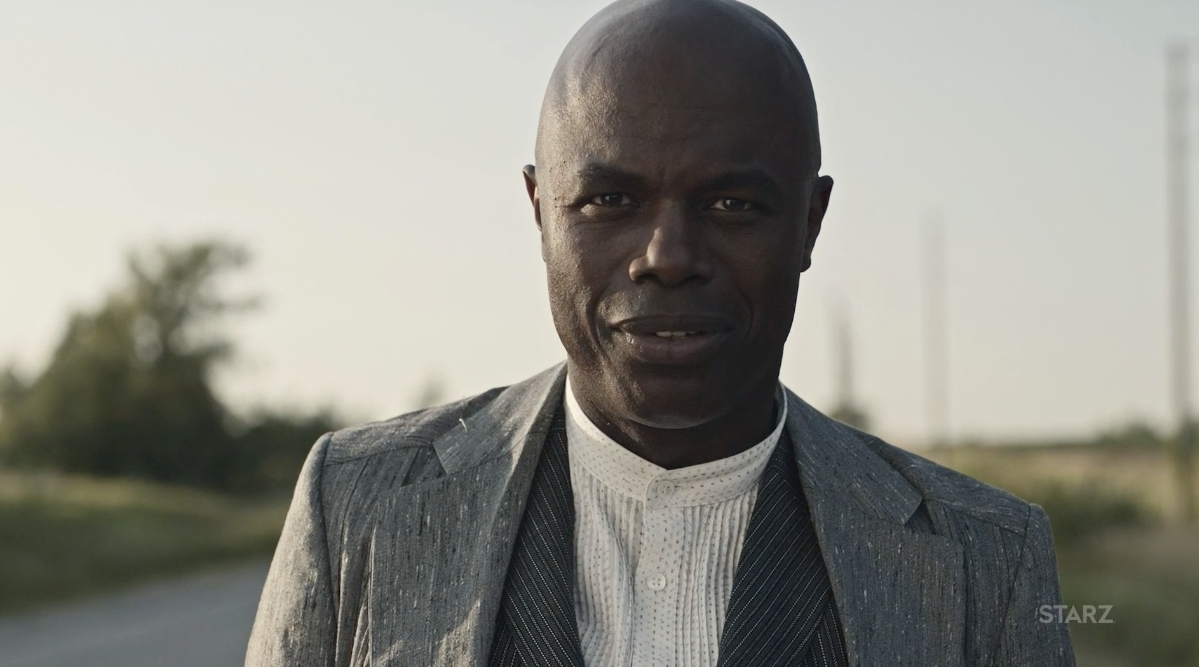 Most times when we see the personification of death in fiction, it's presented as a cold or grim persona. Not so for Anubis on the TV show adaptation of American Gods. Here, the Egyptian god of the afterlife is stoic but unexpectedly warm; he has a job to do, one that fills most people with dread, but he doesn't seem like that bad a guy. And that's largely due to the performance of actor Chris Obi.

The actor, who trained at the Drama Centre London, might be a recognisable face for those who've seen Snow White and the Huntsman or the 2016 Roots miniseries. His work on American Gods has had him portraying Anubis/Mr Jacquel as oddly relatable; there's a hint of everyman dedication and priestly vocation to Obi's performance. He feels like a guy who gets up everyday and does his job the best he can, because he knows that it changes people's (after)lives.

When I spoke to Obi after the end of American Gods' first season, the British thespian spoke eloquently about how he found his way into the head of death itself.

Obi's friendship with Daredevil led to his first encounter with Neil Gaiman's work.

Chris Obi: Well, my friend is Charlie Cox and he did Stardust. He's one of my best pals. So I was kind of familiar with Neil Gaiman, but I wasn't familiar with his works. Really just Stardust. But I'd just done Roots and really got into the habit of reading the source material and Roots blew me away. It had this profound effect on me. And now it would have been a must for me to read American Gods before I undertook it.

The funny thing is that when I got audition, I just knew this character. I knew how I would interpret it. Sometimes, that is not your place, because directors want to feel like they can move you around. But I just had a sense of it. The idea that death to humans is almost the final frontier... I felt that there's no point in being all kind of scary about it. If anything, it led me to be the opposite. And I love the scene [with Mrs Fedil]. I remember reading it and going, "Oh, that's quite emotional," because he is moved, but he will do his job. But whilst doing his job, there is a connection. And he takes his job — not even that he takes it seriously, there's just a connection to what he does and how he understands their fear. But he also understands they need something solid to take them through. That was the initial connection for me.

I was forced to find a place of reality for [Anubis]. I wasn't trying to act him. I was trying to factor in what happens when somebody almost dies.

And then what happened for me was my brother Mitch — my best friend, really — had a stroke which almost killed him. I was just thrown into the reality of what happened and the consequences. My back had spasmed, as a consequence to what happened to him, so I was in a lot of physical and emotional pain. If I tried to have made Anubis showy or to try and act him, it wouldn't have been possible.

I was forced to find a place of reality for [Anubis]. I wasn't trying to act him. I was trying to factor in what happens when somebody almost dies. You know what I mean? This was my brother, there were times when I got this idea he might not live. You almost become quite stoic about it. You can't become too emotional. At the same time, you've got all these actors who are working around the [other parts of the] plot, so you have to be aware and almost you have to become the calm one.

'Don't Try and Out-Act Those People'

American Gods is a show packed with stellar performances. Obi knew early on he'd have to focus on his own performance in a very specific way.

Obi: So it was very fortunate for me to be in the present company of, like, Ian McShane and Orlando Jones and Gillian Anderson. [My thinking was] don't try and out-act those people. Not that it's a competition. These guys go out and hit their marks. Whatever I did, I wasn't going to act. I was going to make [Mr Jacquel] what was happening inside, in life, but it would be on the show. It relaxed me. Then when somebody like Laura — who has that thing that just gets to him — says, "listen," that takes him to another, different place.

There Will Be Darkness

Some of Obi's best scenes on American Gods were played against Emily Browning. When viewers first meet Jacquel, he's very stoic, calm and comforting. But when he encounters Laura Moon, somebody who flouts the rules of his universe, he gets a little pissed off. I asked Obi how he modulated his performance.

Obi: The way I read the script was, I come to people who believe. I wouldn't [normally] be dealing with something like [Laura]. "She's a non-believer," I thought. So, I think, originally, [executive producer] Bryan [Fuller] was like, "There is something about her that he knows." She doesn't believe herself, but there's still something about her that he knows. That's the way in. Do you know what I mean? And then the fact is that he's not used to being challenged. He's very efficient at his job. He's brilliant at his job, and when he sees this girl and she's saying, "No, I don't want to do that," that's where he moves from his normal calm. She's an anomaly.

It's so beautiful working with someone like Emily, because — I can't speak for her — but she almost does the same thing, where she doesn't "act". She just finds the character inside her. So I think we had a lot of moments where we were like, "Nope, you wouldn't do that — no, I wouldn't do that!" And I felt like I was speaking the same language when I was working with Emily. And Craig [Zobel], the director, he got a lot of play to it.

My back was beginning to get a little bit better and all of the sudden, I was feeling, "Oh, I want to find something more than just what happens when he is confronted by an anomaly." And he is determined — the way I see it — to put her where she belongs. Because, otherwise, it's as bad as not being believed in. I don't know what the second season is going to hold, but, it'd be nice to follow that line. How determined is he to find why she's an anomaly.

The Voice From The Other Side

The first thing that struck me after getting on the phone with Obi was that he doesn't sound like Mr Jacquel at all. So I had to ask him where the deep bass of the character's voice came from.

Obi: I promise, it's so organic. I think it's what we do. I think that's the joy of acting, that something happens. And that's the beauty of American Gods, for me. It's that something definitely happened whilst discussing it with Bryan. Something just... I knew who this character was. It's so funny, I think even in my audition, my voice just went lower. And now I'm a bit excited, talking to you, and I'm an octave higher. But when we started, it just roared. It feels a little campy, as well. The drama of him. It just suits.

Right now, I'm speaking and walking around my kitchen but I have to find a stillness for Anubis, which is not me. And that was a process. I've done quite a bit of theatre and tons of creative stuff; this is the most creative work I've done. And it seems to be the least showy work I've ever done. It just allows the actor to find more.

Actors don't always know what the final version of a project will look like, when it's all said and done. When it's something as out there as American Gods, Obi says seeing the whole season play out is a real trip.

Obi: It's mind-blowing. It really is mind-blowing. When I was in LA, I had Starz so I could watch it on the Sunday, and now I'm back London so I've got a day delay. And I'm like, "Oh, I want to see what happens!" Especially of my own work, I'm very critical. Like, I was really critical of when my episode was coming. When the Vikings landed, it was full of action. I saw them tear up that scene. Then I saw my first Anubis scene being full of stillness and talking, and I thought the contrast really worked.

But I like the idea that we — Michael, Bryan, and all of us working on the show — have kind of taken the source material and said, "OK, what else can we bring out?" The themes all get sort of escalated by the political climate. When I watch it, I'm just really like... I'm so blessed to be part of this. I can tell my children, "Look, daddy was once part of this show."

There's a pop element to it, which I think also is essential. I often believe that art should be seen by the masses, you know, like Shakespeare. He wanted to touch everyone. And I think that's what American Gods is trying to do. It's just a pleasure. It's a real blessing to be involved.

The scenes that Jacquel has shared with mortuary partner/chronicler Ibis — played by Demore Barnes — have been noteworthy for the notes of tenderness and caring. I asked Obi if he felt like they were a couple, long-time business partners or something in-between.

Obi: It might just be [a rapport] with Demore, who I just get on with. They're almost opposites. Ibis is very excitable. And Jacquel is just very sonorous… stable. But in that, they find an understanding where there's a little kind of message. It's "No one else believes in us; I believe in you". It's warm. It reminds me of Plato's Symposium, where there are debates about what love is and what is the most purest, perfect love.

[With Ibis and Jacquel,] I believe it's just everything love can be, which is nice. That gives us room to interpret it however you want. And I think we see more of their relationship in season two. You can't be scared for allowing yourself to find new things — because that's real problems for your character. So, it's something to look at. And that's what I like about this project that we're doing. I feel, as an actor, it allows me to grow — I am growing, as an actor should.

The final Conversations With God will be with Yetide Badaki, the woman who play love goddess Bilquis. For the previous instalments in this series, click here and here.