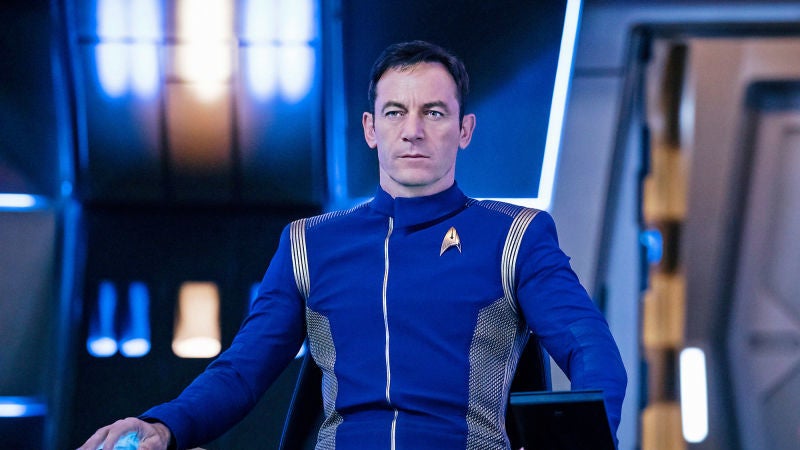 In a preview to its Star Trek: Discovery cover story, Entertainment Weekly shared this little anecdote from the set:

The director halts the action and Lorca, played by British actor Jason Isaacs of Harry Potter fame, steps off the stage. The episode’s writer, Kirsten Beyer, approaches to give a correction on his “for God’s sakes” ad lib.

“You can say that before you can say ‘God,’ ” she dryly replies.

And look, look, I fully understand that Roddenberry’s future Earth had no religion. As a child, that was one of the many things I loved about it. BUT. We say all sorts of things colloquially that we don’t believe in. Most people don’t believe that knocking on wood really forestalls bad luck, but it’s still a handy short cut for “here’s hoping nothing goes wrong.” Similarly, the horse and buggy is not a common conveyance these days, but we still say “don’t put the cart before the horse.” I fully believe that “god’s sake” would still be an interjection in the future devoid of any actual religious belief. Hell, it’s practically there now.

I have said that I like bad Star Trek over good other things many times. I like the makeup of this crew, and I like that it’s moving away from the captain and avoiding doing another show about ships named Enterprise. I lived through Voyager and Enterprise and did so gleefully. But Discovery is just… weird in its choices. Like, remember how it was so adamant about “breaking” Roddenberry’s rule about interpersonal conflict among the crew? Despite the fact that this rule hadn’t been enforced for decades? Why adhere to the letter of Roddenberry’s religion vision rather than simply the spirit of that rule? Everything, everything about this show confuses me.

Anyway, it premieres September 24 on CBS, with subsequent episodes available on CBS All Access.