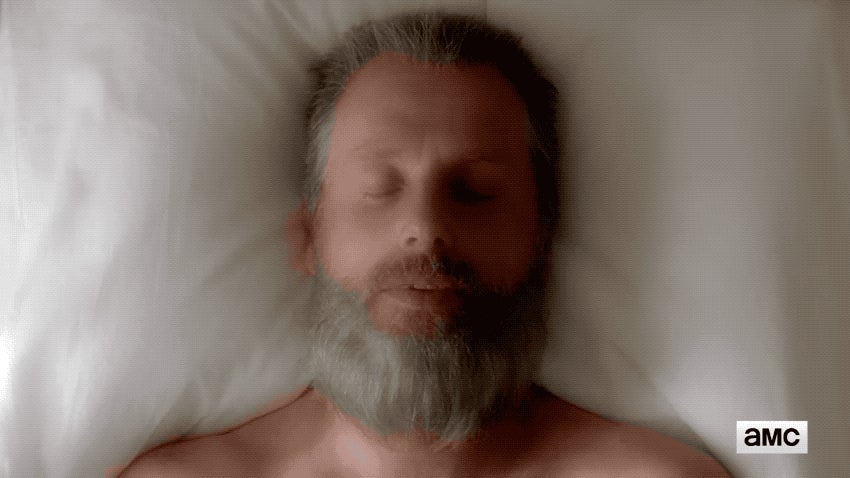 The latest trailer for the next season of The Walking Dead left fans with a ton of questions — mainly, what the hell was going on at the end of it? Fans of the original comic have a clue what's going on, and soon the rest of us will too... by the end of the first episode.

What The Hell Does The End Of This Walking Dead Season Eight Trailer Mean?

Video: Given that the war between Rick and Negan had just begun in last season's finale, we were expecting The Walking Dead's first season eight footage would be epic. It definitely is, but it's the trailer's very unexpected final shot that has us scratching our head about what it means. And you can watch it and be equally baffled here.

At the end of the season eight trailer, released during San Diego Comic-Con, we see a bearded, older, and softly lit version of Rick wake up in bed, echoing his wake-up to the zombie apocalypse during the series premiere. This left audiences with a ton of questions. Are we getting a time jump? Will Rick survive the war with Negan? Or, worst of all, is this just a stupid dream sequence?

Executive producer Robert Kirkman revealed that audiences will find out the truth (or something very close to it) in the very first episode of the season. Speaking with reporters at the Television Critics Association press tour (as shared by Entertainment Weekly), Kirkman teased out that answers are on their way and we won't have to wait until the end of the season to see old man Rick emerge from his slumber.

"I'm pretty sure you'll learn in the first episode what that means," Kirkman said.

Kirkman added that comic book fans should have a good sense of what's going on, even if may not fit into the storyline as they know it. For those who are curious, the comic book jumps forward two years from the conclusion of the All-Out War. Rick is injured from a crossbow bolt to the back, as well as Negan fucking up his leg, hence why he uses a cane (which you can see in the trailer). Kirkman indicated that he's trying to keep comic book fans on their toes.

"That is an intriguing tidbit that we did throw out there on purpose, and we're hoping that people continue to question how it is that fits into the storyline and what it is," he said. "Comic book fans know where a scene that kind of looked like that would fall, but it also doesn't seem like we would be getting to that just yet if you were a comic book fan, so there's a mystery to that."