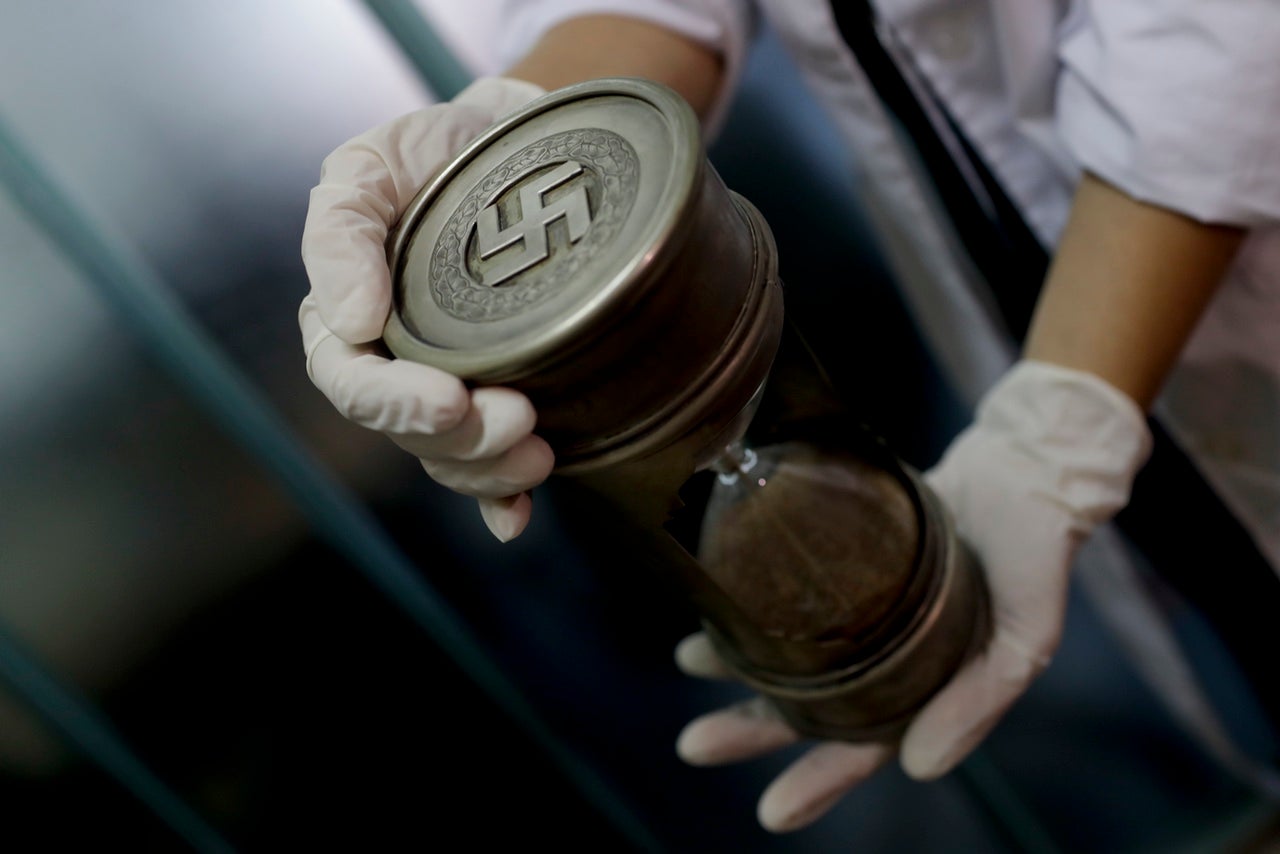 Federal police in Argentina recently discovered a time capsule of evil, hidden inside a house near Buenos Aires. Roughly 75 Nazi artefacts, including everything from a large knife to Nazi medical devices to a photo negative of Adolph Hitler, were uncovered in a secret room. Police are investigating when and how the items entered the South American country.


A member of the federal police holds an hourglass with Nazi markings at the Interpol headquarters in Buenos Aires, Argentina (AP Photo/Natacha Pisarenko)

As Haaretz reports, agents from Interpol raided the home of the unnamed owner of the Nazi artefacts on June 8. Some artworks of “illicit origin” were discovered on the north side of Buenos Aires, leading police to the man’s home. When investigators arrived they found a large bookcase that was hiding a secret room. The man remains free, but it’s unclear if he will face any charges.

The investigators have reached out to Holocaust experts to learn more about where the Nazi pieces may have come from, but members of the Jewish community in Argentina believe that they must have been brought to the country by Nazi officials following World War II. 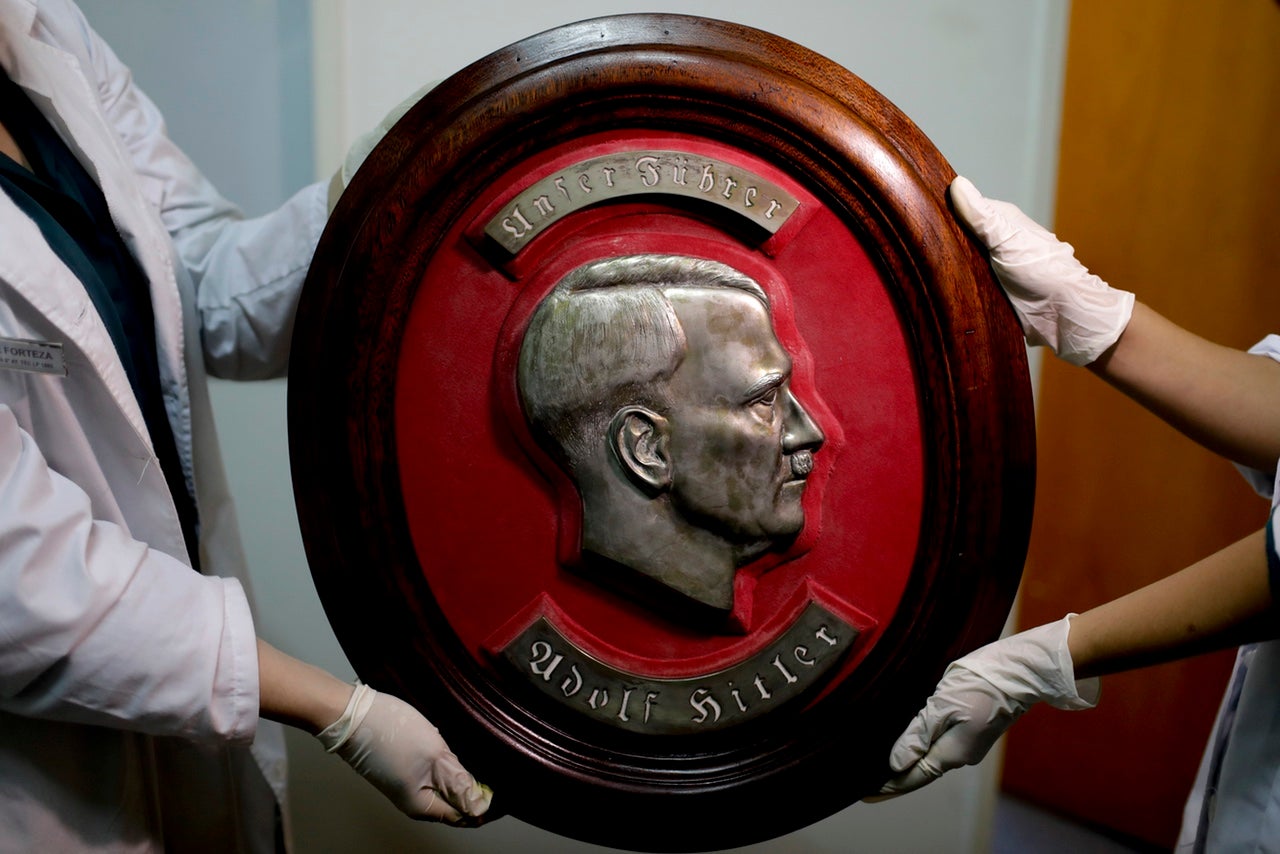 There was initially some speculation about whether the items could be reproductions, but investigators believe they’re originals. But there are obviously still a number of questions surrounding how they arrived in the country. 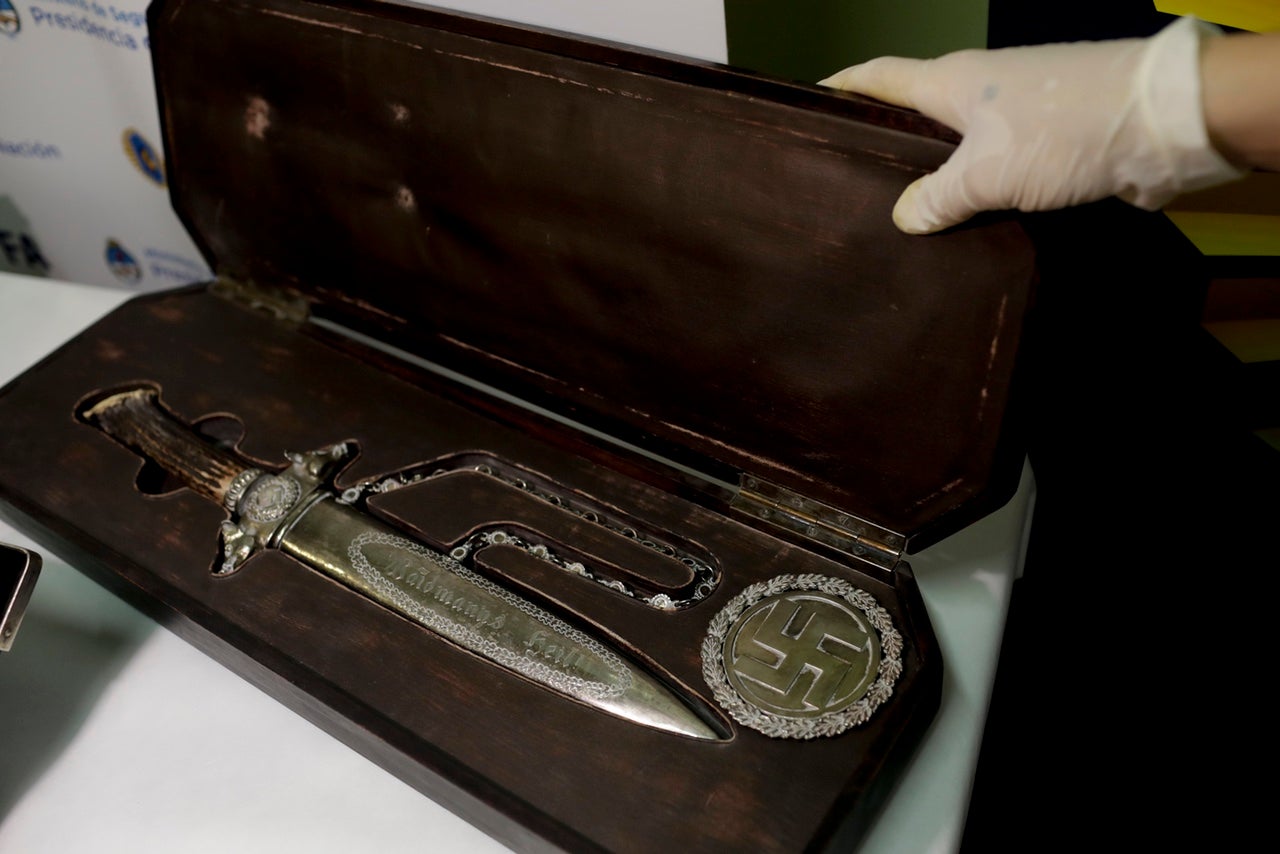 A knife with Nazi markings is seen at the Interpol headquarters in Buenos Aires, Argentina (AP Photo/Natacha Pisarenko)

The discovery is the largest of its kind in Argentina, a country that has what might best be described as an unfortunate relationship with the Holocaust. After World War II, a number of top Nazi officials fled to Argentina, including Adolf Eichmann and Josef Mengele.

Eichmann was discovered in Bueno Aires by Nazi hunters in 1960. He was brought to Israel and tried and hanged in 1962. Mengele escaped Argentina and fled to Paraguay and later died in Brazil. It’s not yet known if any of the items discovered this month personally belonged to Eichmann, Mengele or any other Nazis who escaped Germany. 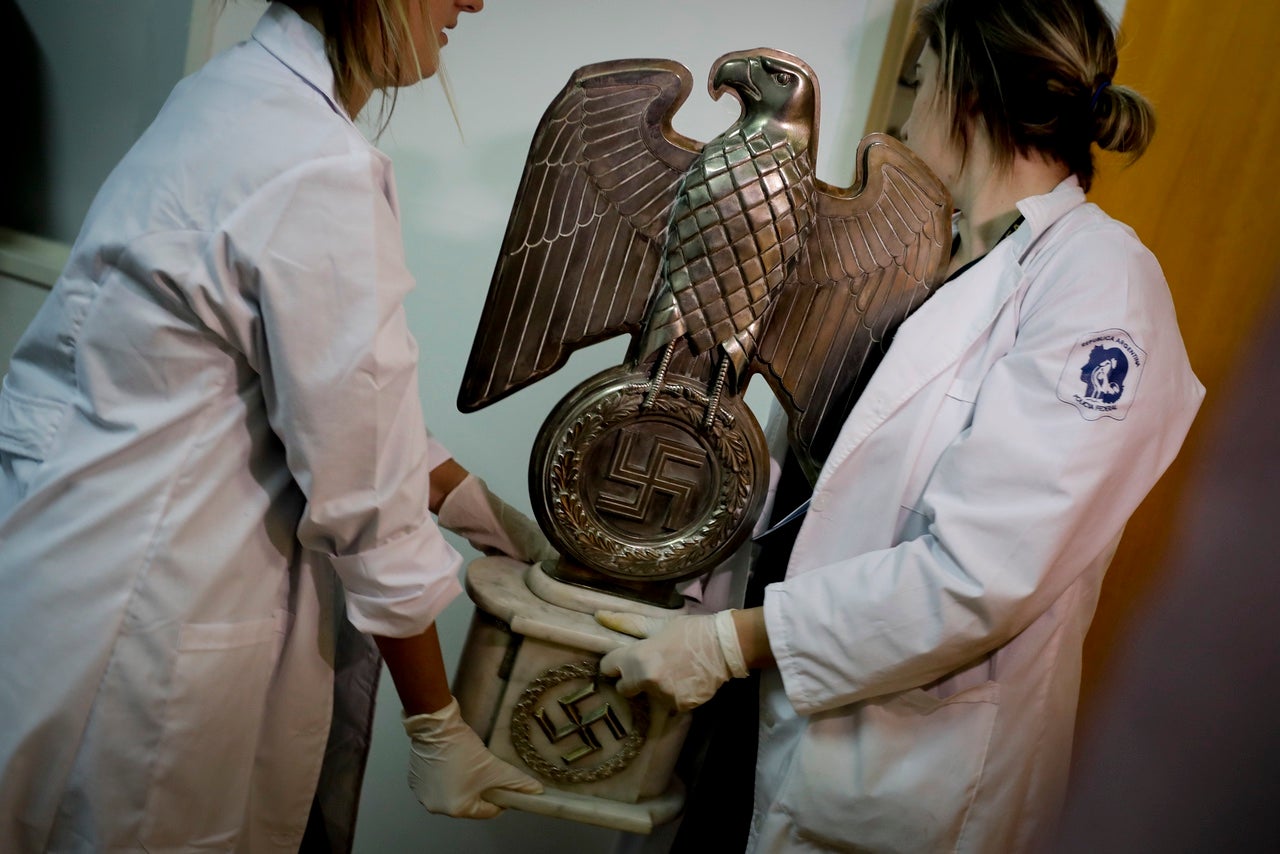 Members of the federal police carry a Nazi statue at the Interpol headquarters in Buenos Aires, Argentina (AP Photo/Natacha Pisarenko)

“This is a way to commercialize them, showing that they were used by the horror, by the Fuhrer. There are photos of him with the objects,” said Bullrich. 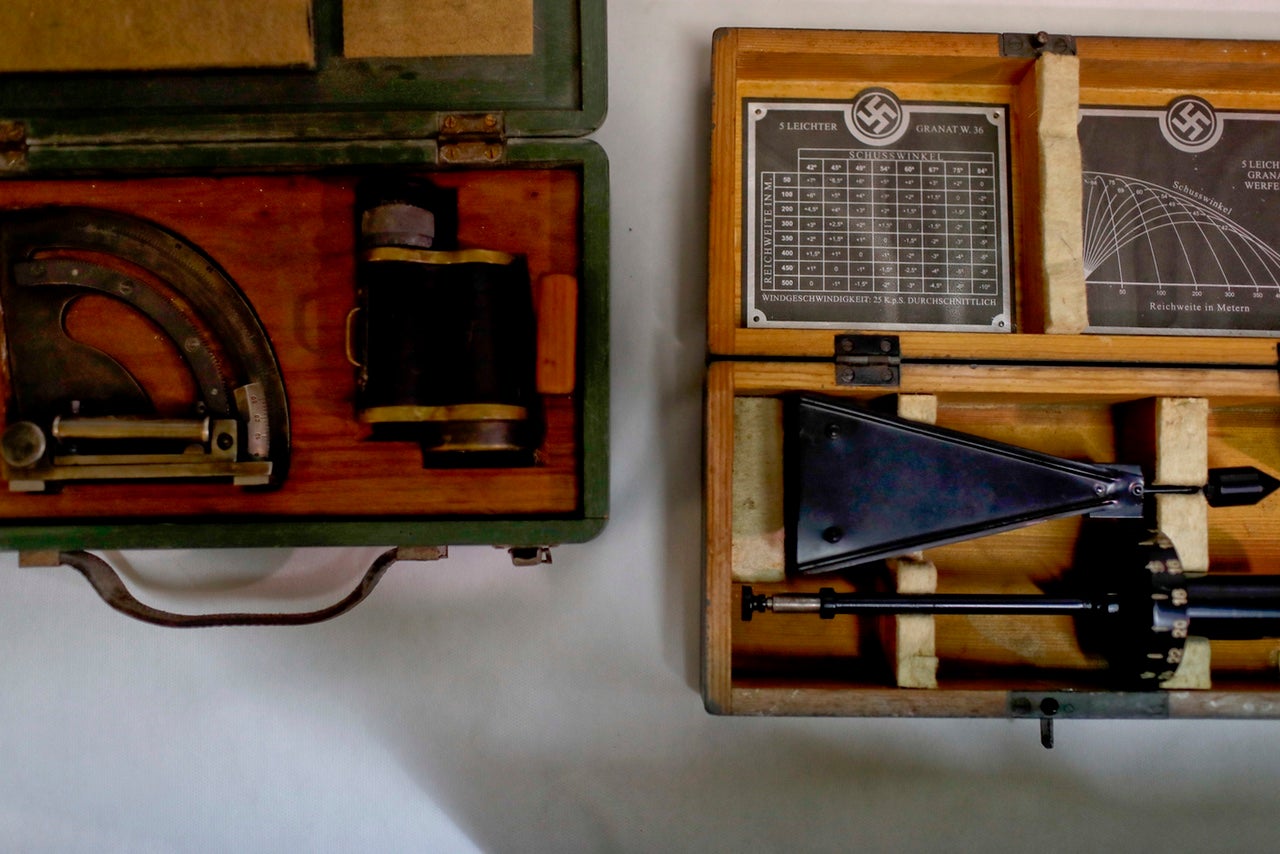 Some of the most disturbing items in the collection are medical devices, including items used to measure the size of human heads. Nazi scientists travelled the world in the 1930s measuring heads of different peoples, believing in a pseudoscience that superior races could be determined through facial features.

The collection also includes Nazi toys and other things that would have been targeted to Nazi youth, such as a collection of harmonicas featuring illustrations of young kids holding Nazi flags. 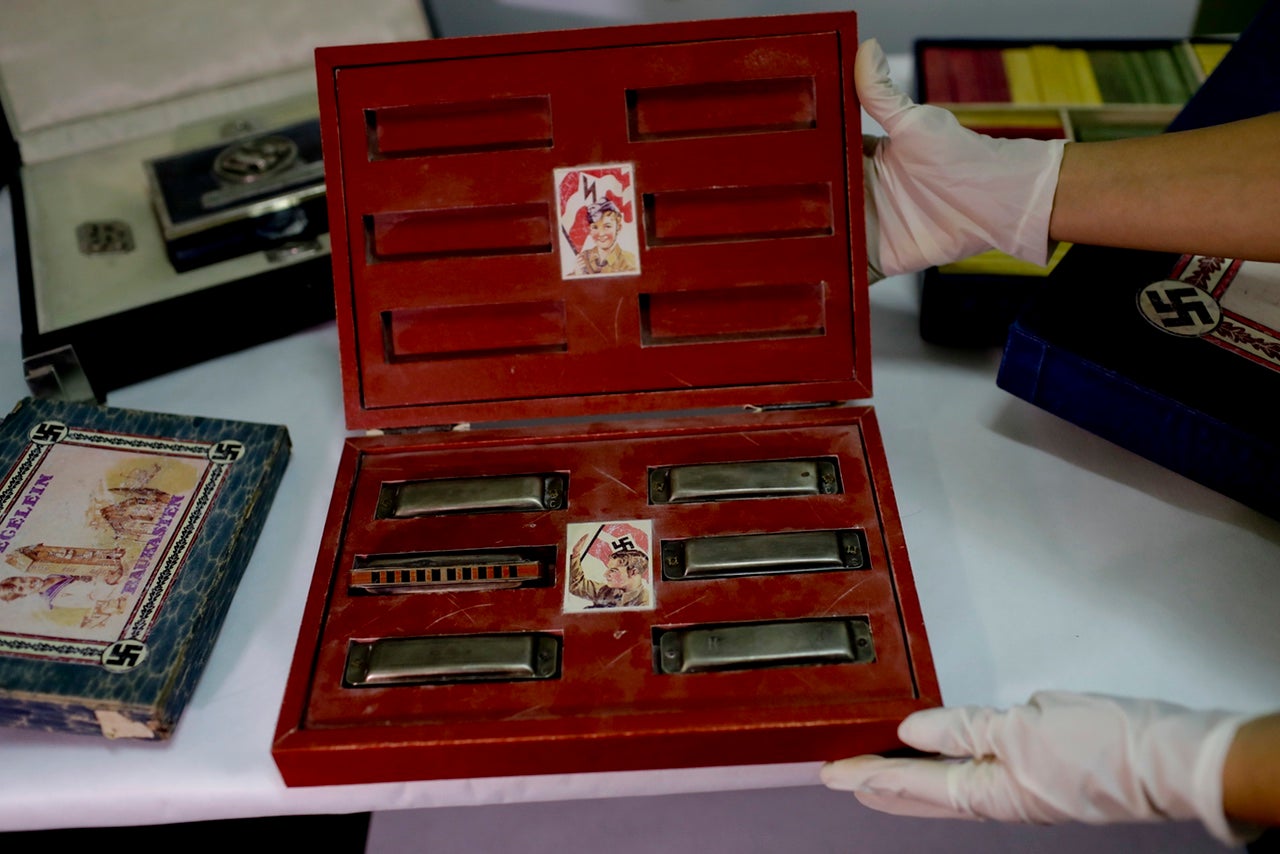 A member of the federal police shows a box with swastikas containing harmonicas for children at the Interpol headquarters in Buenos Aires, Argentina (AP Photo/Natacha Pisarenko)

“There are no precedents for a find like this,” Nestor Roncaglia, head of Argentina’s federal police, told the Associated Press. “Pieces are stolen or are imitations. But this is original and we have to get to the bottom of it.”