Everything You Need To Know About Lord Buckethead, The Spacelord Star Of The UK General Election 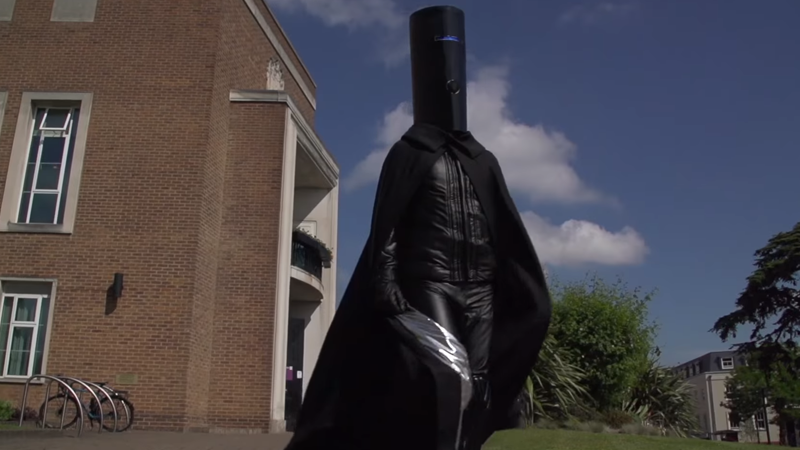 The United Kingdom has woken up after going to the polls to a shocking upset for Prime Minister Theresa May, and a hung Parliament — an outcome where no party managed to achieve a singular majority. But if foreign audiences tuned in, they have been less perplexed by the electoral system than Lord Buckethead.

My nation's finest politician, Lord Buckethead — who, up until yesterday, was an independent candidate running for election in the Maidenhead constituency, the seat held by PM Theresa May since 1997 — shot to fame yesterday as weary foreigners, looking to find any way to graspingly understand my home country's frankly ludicrous political process, found themselves suddenly more confused than ever. Mainly because when they tuned into the coverage to find out what the bloody hell a hung Parliament was, they were greeted by someone dressed up in all black with a ginormous bucket on his head who claimed to be from hyperspace, standing just a couple of metres away from the most powerful person in British politics. If you'll indulge me:

You know what, sometimes this country can just be ridiculous in a very good way. pic.twitter.com/CyMr329Oga

Elmo from Sesame Street was also there, because of course he was. The UK has a long, fabled history of independent political candidates being a little... let's say strange. After all, a recurring feature at our elections is a party literally called the Monster Raving Loony Party.

So who the hell is Lord Buckethead? Well, he (or they?) runs on a policy of being the only intergalactic spacelord in British politics, and Lord Buckethead has actually run in several UK elections in the past, running against former Prime Ministers Margaret Thatcher and John Major in both 1987 and 1992. But no one really knows if it's the same Buckethead, because they never reveal their identity. Or maybe Bucketheads are like Time Lords on Doctor Who, and capable of regeneration.

Morning! No, you didn't dream it. I stood on a stage with the Prime Minister of the United Kingdom. (And I did a dab). #anewdawnhasbroken pic.twitter.com/Qj4Gk2Fqzi

As for the policies our Spacelord ran on, well... see for yourself. They include banning proposals of turning the city of Birmingham into a Star Base until at least 2022 (presumably so Buckethead's dominance of space can remain intact), exiling noted right-wing media troll Katie Hopkins to DC Comics' Phantom Zone, and selling less weapons to Saudi Arabia so we can buy more laser guns from Lord Buckethead.

If that wasn't enough to sell you, here's Lord Buckethead's party political broadcast, which is him singing a David Bowie knockoff while getting out the vote.

Suffice to say, Lord Buckethead is as fantastic as you imagined if you blearily attempted to wade into the quagmire that is British politics yesterday. Sadly, Lord Buckethead is not in power this morning — he secured 249 votes to Theresa May's 37,718 in Maidenhead — but the space lord still stands as a testament to the UK's love of science fiction, taking the piss out of itself, and completely wild elections.

249! A new Buckethead record! Something to celebrate, eh? #GeneralElection17 pic.twitter.com/cCx7Utc8EL

Wouldn't have it any other way, really.

Jake Buehler 08 Apr 2020 7:57 AM
She was a common black hawk. He was a red-shouldered hawk. They weren’t in the same genus, let alone the same species, and they normally don’t even live in the same part of the continent. But in a strange twist of fate, none of that mattered: It was love at first screech.