Your Favourite Paperweight May Be A Plesiosaur Bone 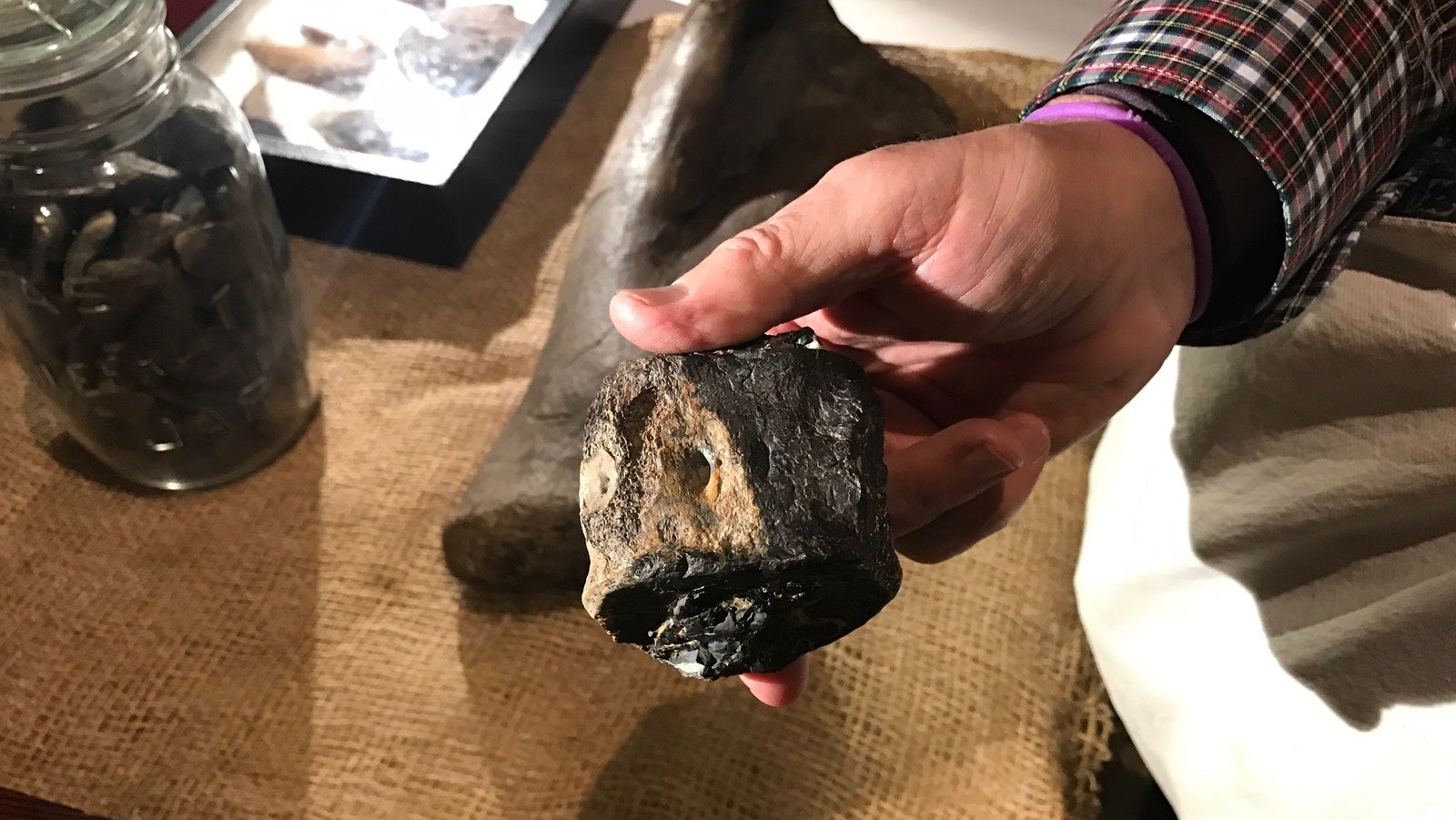 A spacious yellow hall connecting galleries and a museum service entrance sits beneath the main rotunda of New York's American Museum of Natural History. A bronze statue of Theodore Roosevelt lounges on a bench in the middle, and Roosevelt-themed dioramas line the walls. It's a hall passed through, a pleasant detour on the way from the life-sized blue whale model to the planetarium.

This past Saturday, though, scientists sat behind tables topped with artefacts, taxidermy, fossils and bugs as guests lined up holding specimens they or their friends had found. It was the annual Identification Day, when people make a pilgrimage to the museum to learn the identity of their pet rock. Other reputable museums host similar days to let folks like us interact with scientists, and there's always a little drama as you present your rock to the ID-er. Have you found some 80 million-year-old reptile bone? Or is it what one scientist called a simulacra, an imitation fossil? 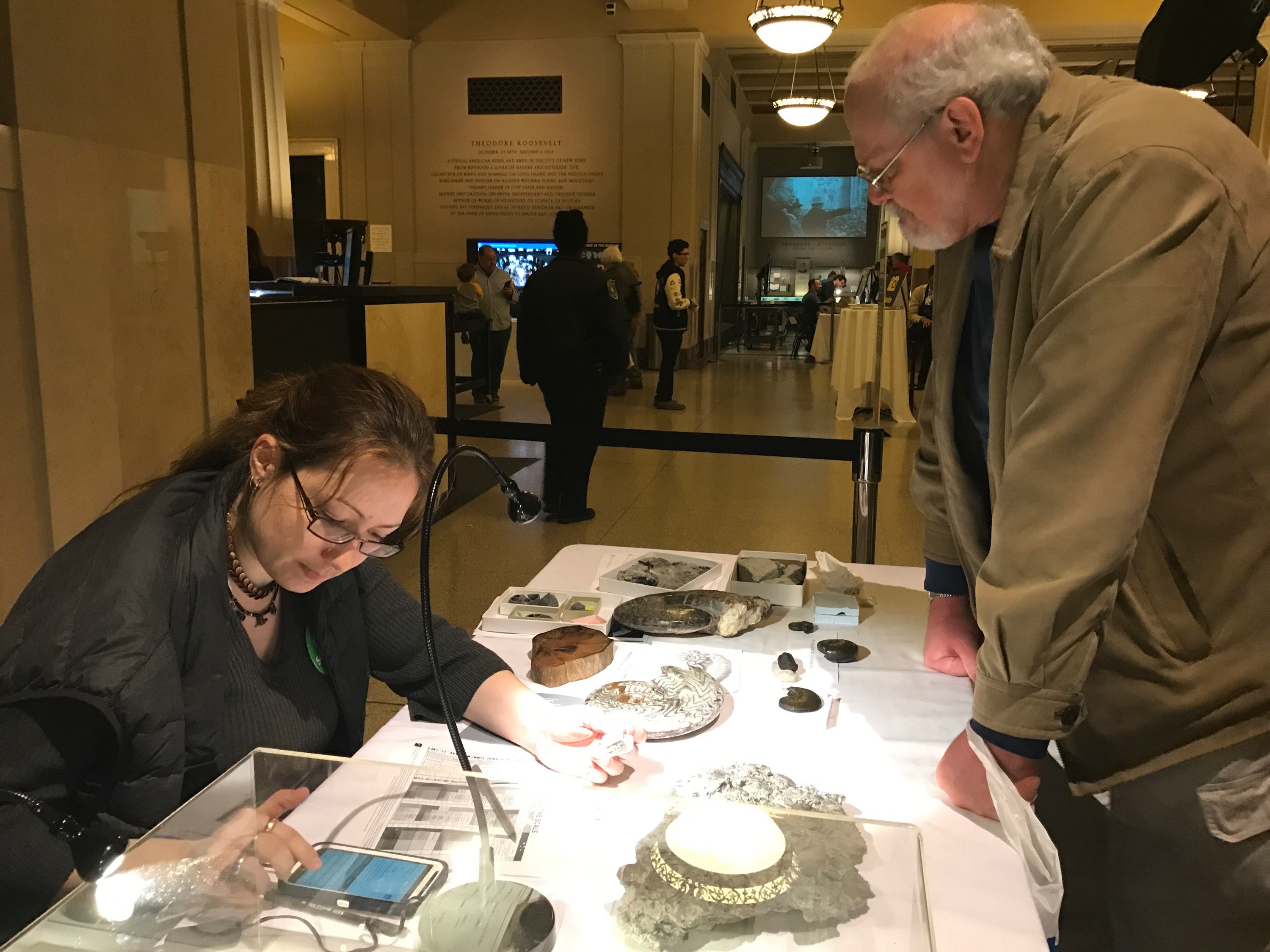 An older man with an Italian accent stood at the invertebrate palaeontology table. Scientific assistant Mariah Slovacek peered at his specimen, an oblong palm-sized black rock with grey scalloped pattern. "I found this in California, in Malibu," he said. He'd seen it on the beach after a storm. "When I saw something different like this I said, 'Oh my god...' It made my day."

"I was using it as a paperweight. But now it's something to console me in my old age, that there's something older than I am."

Slovacek gave it a look. The scalloping must have come from lots of crushed shells, glued together by whatever sediment fell on top of them. "They're bivalve shells. When you go to a beach you see shells washed on shore that get broken in the waves," she said. "This is layers of them that have been turned into a rock." But how old was it? "It could be anything. Clams have been around a long time. They're basically stone already."

Still, definitely a fossil, and the man left with a certificate that said "bivalves". 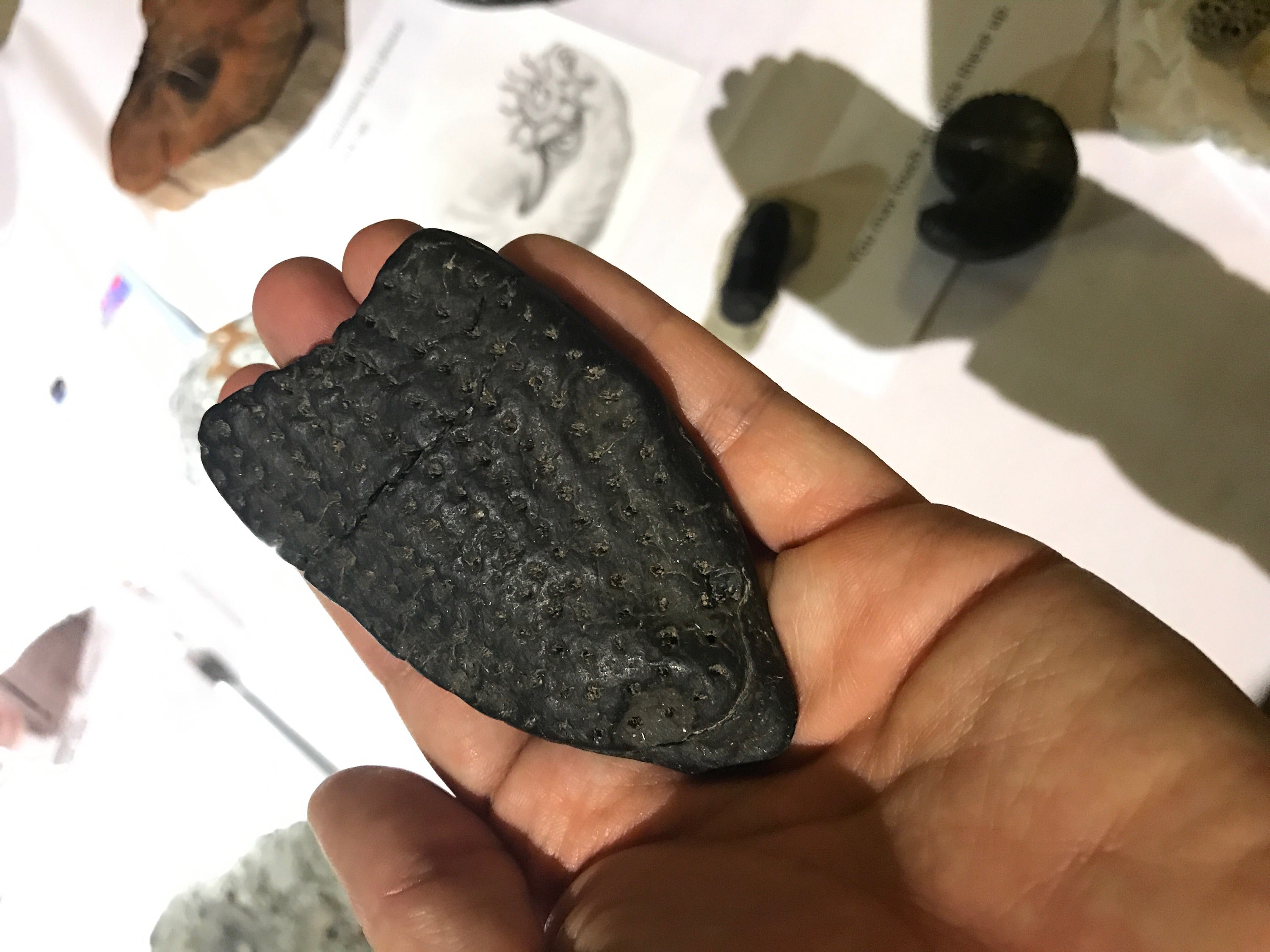 A woman in a floral-pattern dress came next. She showed Slovacek a flat, black rock with lines of dots, like someone had tried to make a football-shaped cookie and taken a bite. She'd found it on the banks of the Hudson River, and a friend told her it might be an animal. It definitely wasn't a dinosaur part — she'd already been sent over from the dinosaur table.

"It looks like you've got a coral," said Slovacek. "I couldn't tell you what kind of coral it is."

But what about the pattern on it, the woman asked. "Coral is a colonial organism," said Slovacek. "You have a single coral, then they grow together as a big old family... what we've got here are the individual polyp chambers. Each hole is the centre that they grew out of." It had smoothed out while tumbling around underwater.

"I thought it was a Native American tool," the woman said. "But that's OK. I'll take coral." She was just excited that the rock had a story, and the certificate to go with it. 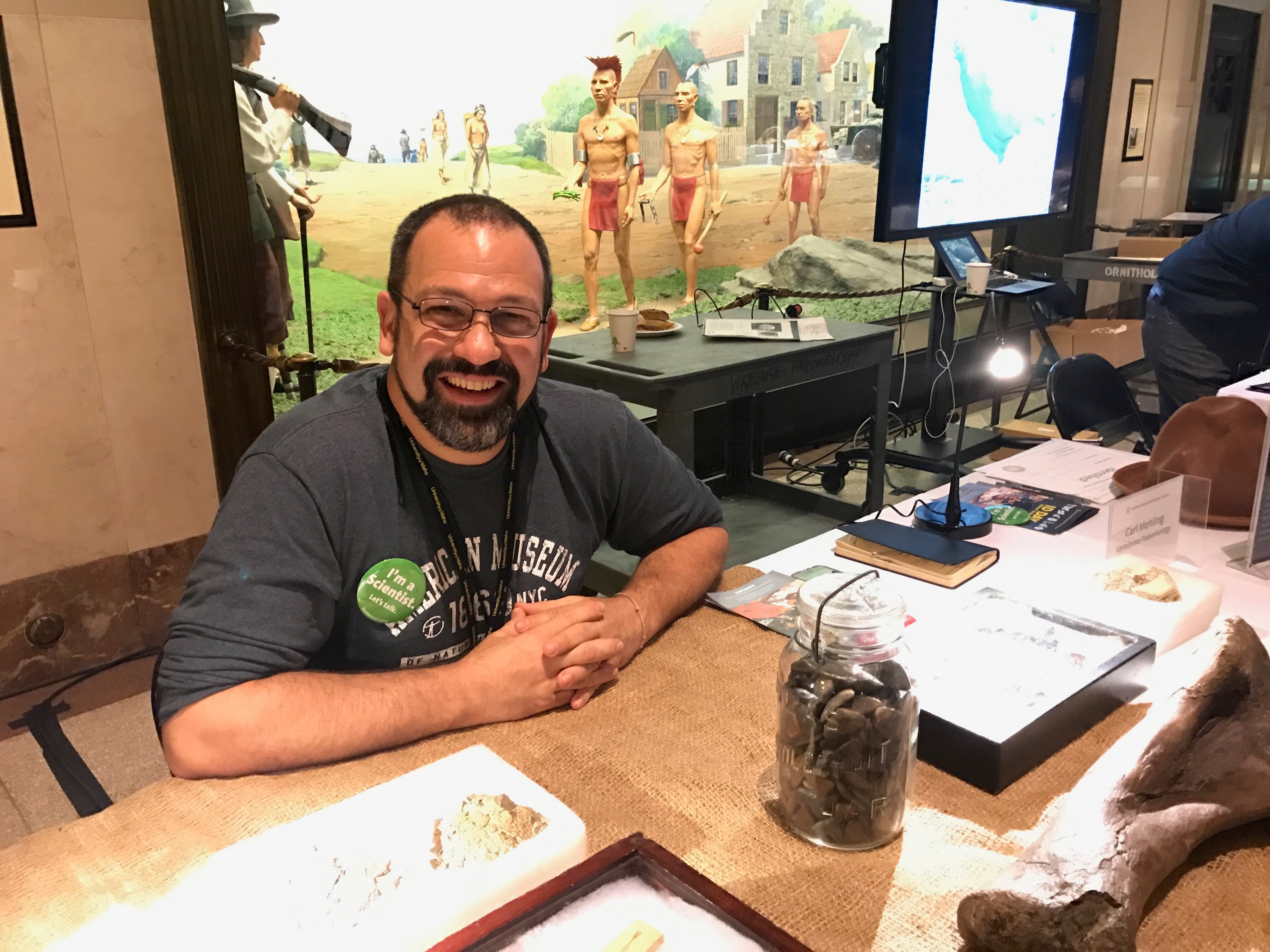 Carl Mehling, senior scientific assistant at the AMNH, was sitting with the dino bones. "Coral, is that what that was?" He had just sent the woman over to Slovacek's table. "The black thing? That thing is nuts. I loved that thing. Because I didn't know what it was."

And what the best thing he'd seen all day?

"A woman brought a bone her brother found," a plesiosaur vertebrate, he said. Plesiosaurs were large aquatic reptiles that lived between 200 and 65 million years ago, give or take a few million years. Mehling spotted the woman's husband, a British man in a worn brown leather vest. I asked to see it. 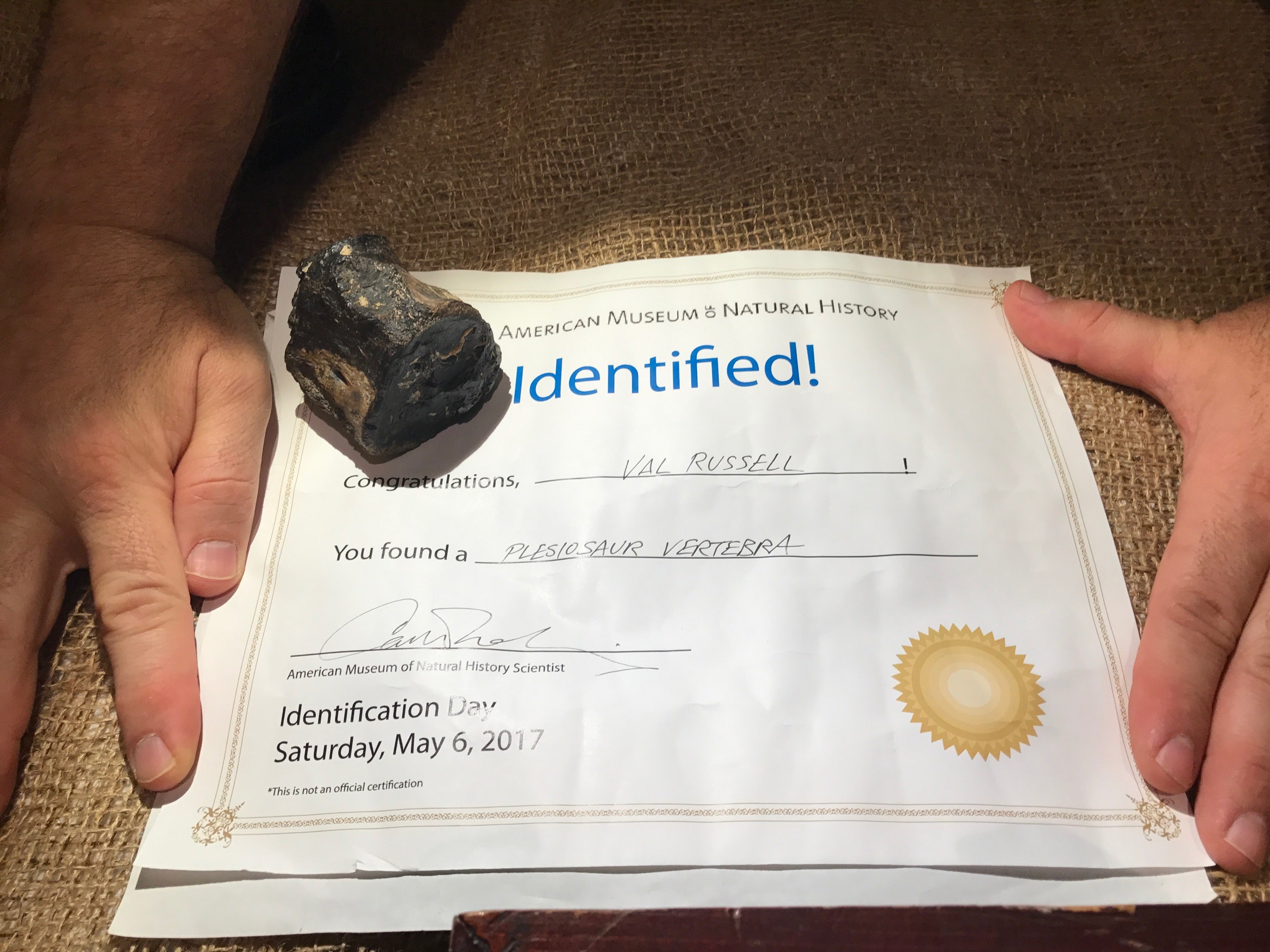 "I'm not the one who found it. It was found by my late brother in law," he said. Mehling had been quite impressed with the sample. "That's it, that's the vertebra. It doesn't stand upright." The bone was shaped like a flattened cylinder, proof that the animal moved with four appendages. "But I got the state wrong because I'm a damned Brit. I told him it was Idaho. [Mehling] said, 'You sure it wasn't England?'"

It turns out the man's brother-in-law found the bone in Montana while caving.

"I wasn't regarding it as something over 80 million years old," he said. "I was using it as a paperweight. But now it's something to console me in my old age, that there's something older than I am."

If you have your own rocks lying around, you can either check to see if your local museum has an ID day, or you can do some research and email an expert who can help. When getting a rock ID'd it's important to bring as much information as possible about the sample, including where you found it. And it should go without saying, but museums prefer you not bring dead animals.