You Will Feel Unclean Watching This Video Of Bee Sex 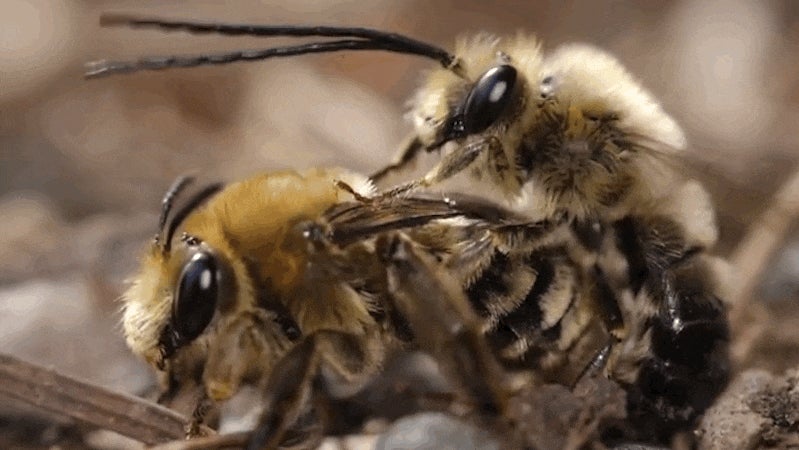 For those who came here expecting the uncut version of Bee Movie, you're in the wrong place. This is a blog about some very unnerving bee-on-bee action — not some culmination of sexual tension between Renee Zellweger and Jerry Seinfeld's characters in the 2007 cult movie. Apparently, long-horned bees copulating is pretty unsettling and uh, there's video to prove it. I'm sorry.

Arthropod macrophotographer Karla Thompson captured the bees getting down and dirty in incredible detail less than a month ago. In the video, the male bee — which has the freakishly long antennae — strokes the female with his feely-things in an effort to put her in the mood. The most striking aspect is how graphic it is, for a video of two bees doing it. Gizmodo reached out to Thompson for comment on how she was able to capture the moment, but had not heard back at time of writing.

"During the session the male would use his legs to softly stroke the female's sides," Thompson wrote on her Patreon. "During actual penetration, the female would throw her legs up and struggle to dislodge the male. This is when the male would reach out with his extra long antennae and curl them around the female's antennae rhythmically stroking upward in what seems to be a pacifying gesture."

You can watch the whole shebang below. Seriously, get a room, you two: