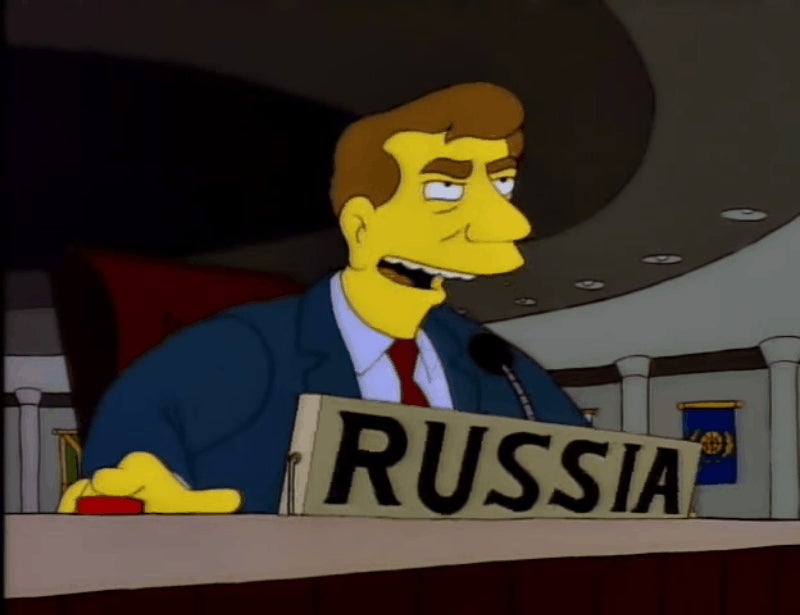 Just when you think 2017 couldn't get weirder, two countries get into a spat on Twitter and use a Simpsons GIF to accuse the other of aggression. Seriously.

Yes, it all started when the official, verified Twitter account for the country of Ukraine tweeted out this not-so-subtle jab at the fact that Ukraine had a diplomatic relationship with France long before Russia was on the scene:

The official, verified Twitter feed of Russia responded with a tweet saying that they were proud of their common history, imploring Ukraine that their heritage "should unite our nations, not divide us":

@Ukraine We are proud of our common history. ??, ?? & ?? share the same historical heritage which should unite our nations, not divide us. pic.twitter.com/hdmkuGy22p

And then Ukraine responded with a GIF insinuating that Russia wanted to go back to the old days of the Soviet Union, back when Ukraine was part of the USSR:

@Russia You really don't change, do you? pic.twitter.com/HDfS9A8jWZ

Yes, not just any GIF. A GIF from the Simpsons. Specifically, the 19th episode of the ninth season, "Simpson Tide", which premiered on 29 March 1998.

2017 is truly the weirdest possible timeline.