The 2017 Honda Civic Si is no revelation of automotive excellence. But it's easy to live with, encourages hard driving and has a little attitude without making you look like an arsehole. Messing around with this car is enough to lure anyone into driving for the fun of it, and that's exactly the point.

(Full Disclosure: Honda provided food and a flight from Los Angeles to its performance proving grounds in Mojave so I could shake out the Civic Si and tell you all about it.)

Forget Fast & Furious references and callbacks to the import tuner car trend we left in the last decade. We're riding a healthy wave of fully-fledged sport compact cars right now, and it's a great time to be shopping for an interesting car on a modest budget.

The Ford Focus ST, Subaru WRX, Volkswagen Golf GTI and their competitors are all celebrated as damn decent driving cars with everyday capability that you can have for about $40,000 in Australia. I'll leave competitive benchmarking against those machines for another day. 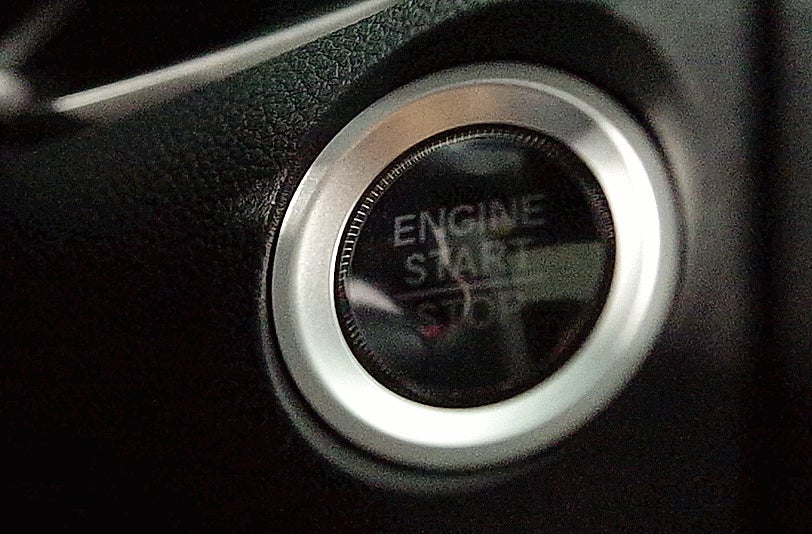 What I will say is I have driven the Civic Si's predecessors and cousins. Heck, I've been a Honda family member for most of my driving career and I still run a 10-year-old manual-shift Acura (346,009km and going strong!) While the new Si doesn't feel quite as alive as the '91 Civic Si, '99 Civic Si and '96 Acura Integra my friends and I raised hell in high school with, it's a lot of fun, a lot more comfortable, and yeah, the six-speed manual is still excellent. 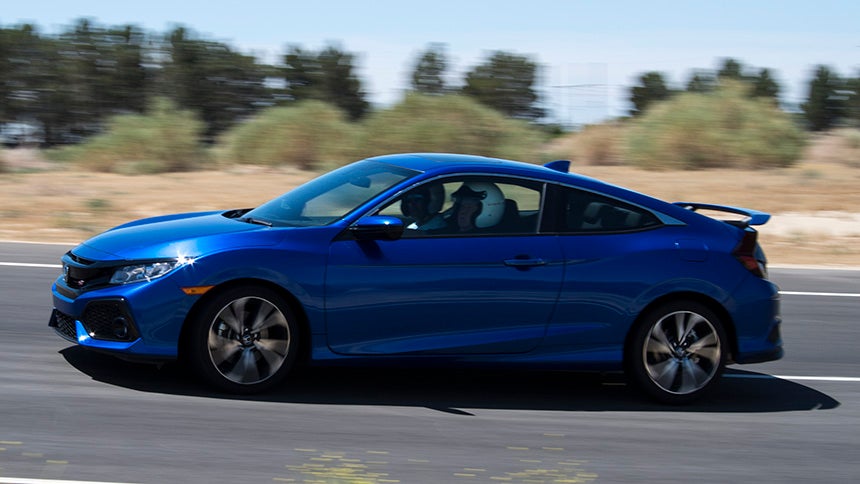 The Honda Civic Si stands for "Sport Injection," "Sequential Injection" or "yes" depending on who you ask, but what it means is "economy car with flavour."

The formula is pretty simple: take a small but family-friendly people mover and make its suspension more performance-oriented, add a modest-but-peaky powerplant that can be efficient or exciting and hook that up to a manual transmission that's so crisp satisfying to snap off shifts in you'll feel like a driving hero well before you break the speed limit.

When Does The VTEC Kick In? 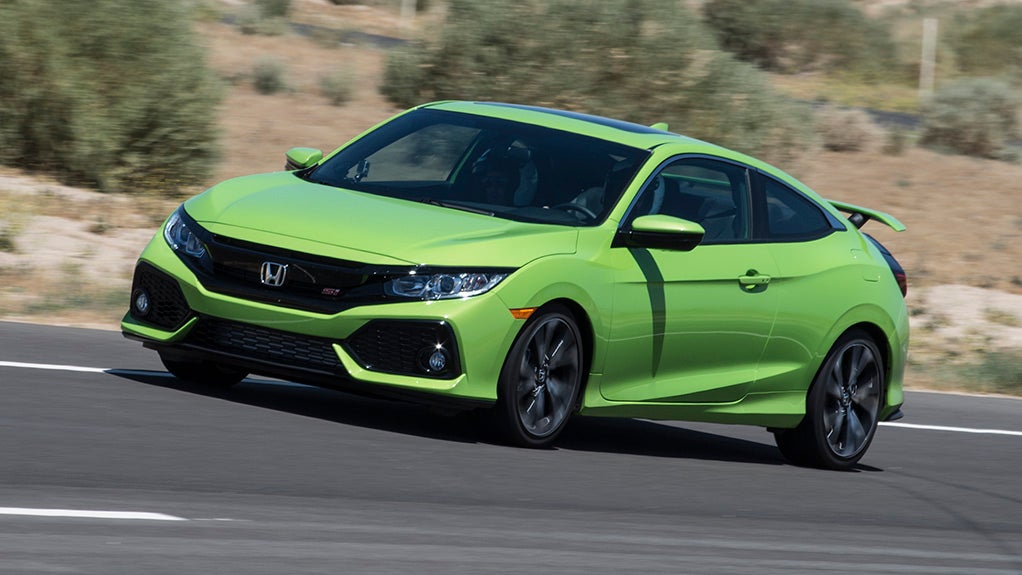 Sadly, the new Civic Si does not have VTEC, despite the fact that some of these cars will inevitably end up with stickers insisting that it does.

VTEC became associated with high-performance Hondas because until recently, this was the technology the company used to make engines that could physically transition between an efficient mode and an aggressive one.

Before tuner bros were sucking on vape pens and tilting their heads to try and get stanced cars over speed bumps, they used to exchange high-fives and talk about "VTEC kicking in, yo." That's referring to Honda's variable cam timing system, which was not a magical go-fast juice but it did step your VTEC engine up to a significantly higher rate of air and fuel consumption over a certain RPM, causing it to make more power.

The practical benefit was that the car could sip fuel at low RPMs while still having some fire in reserve, but it also resulted in Honda's performance cars having a dearth of low-end power and then a hard surge at wailing engine speeds.

This year's Civic Si uses turbocharging to create the same effect, and interestingly, it has pretty much the same pros and cons as Honda's VTEC cars without making quite as much noise.

The Specs That Matter 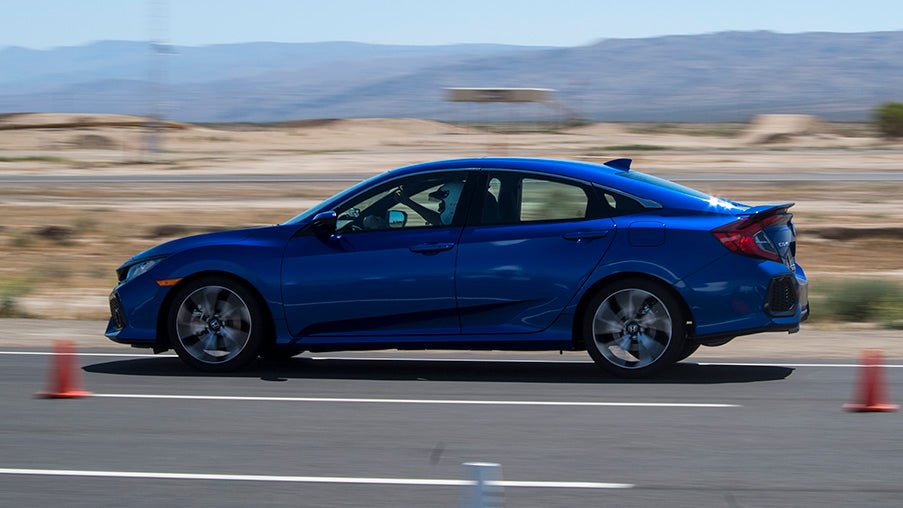 So no VTEC, but you get turbo power instead, the first time ever for a Civic Si.

Still, there's some hardcore Honda left: the only available transmission is traditional, three-pedal, a six-speed manual with a shorter linkage than other Civics and a limited-slip differential to keep the front drive wheels in line.

The only real Civic Si option is "two doors or four," and both supposedly weigh about 1,315kg ready to drive, though the sedan has a slightly better claimed front-to-rear weight balance. The new Civic Type R only comes in hatchback form, unlike this machine. 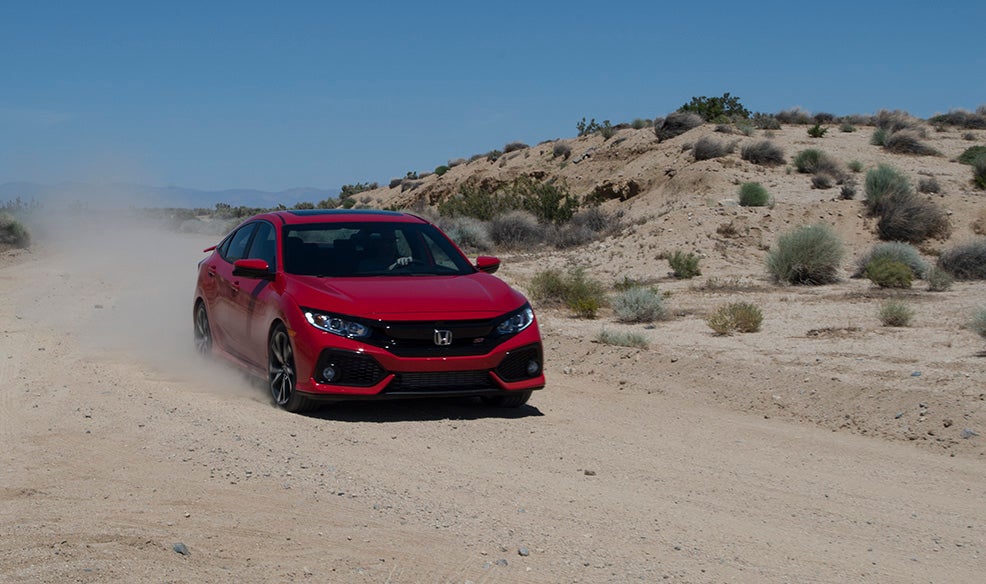 Whenever we talk fast cars with front-wheel drive, we're going to have to deal with torque steer. But it seems essentially nonexistent in the new Civic Si.

When a car's front tires are taxed with propelling and pointing a vehicle or simply fed too much power, they can be overwhelmed and get squirrelly. "Torque steer" is basically what happens when you're pushing a front-drive car too hard, and it pulls you left and right when you're trying to go straight.

In a hard-charge merge, my friend's 1999 Civic Si completely lost its cool and shook between two lanes every time he shifted gears near redline. Even my 2005 Acura TL, on high-performance tires, tugs itself around if I ask it to accelerate too hard.

Dump the clutch, hang on and snap from a stop to the speed limit, or whatever, and the 2017 Civic Si runs rifle-straight as its enormous center-mounted tachometer bounces across your peripheral vision. The car is impressively well composed in a headlong sprint, and if you carry speed into corners, the responsiveness of the steering wheel stays consistent and gives you the confidence to keep driving hard. 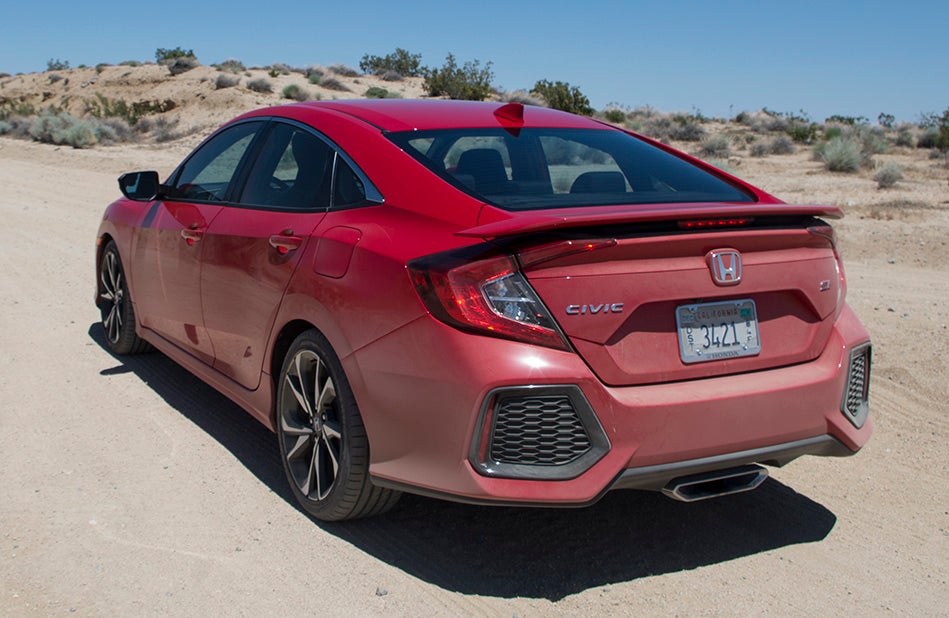 While something like a Porsche 911 GTS can swing around corners with the speed and unshakable stability of the moon orbiting Earth, the Si tilts and weight transfers and feels like it's working hard in a turn.

A "Sport Mode" mechanically stiffens the Sis suspension slightly, exaggerates the electronic throttle's response and appreciably wakes the car up. But hard straight-line acceleration isn't what will keep you coming up with excuses to drive this car. The Si really shines when it's linking turns and shifting between second, third and fourth gear. The clutch pedal is so light it almost feels like a button, but the shift lever itself has a great throw and moves into every gear with a satisfying snick. 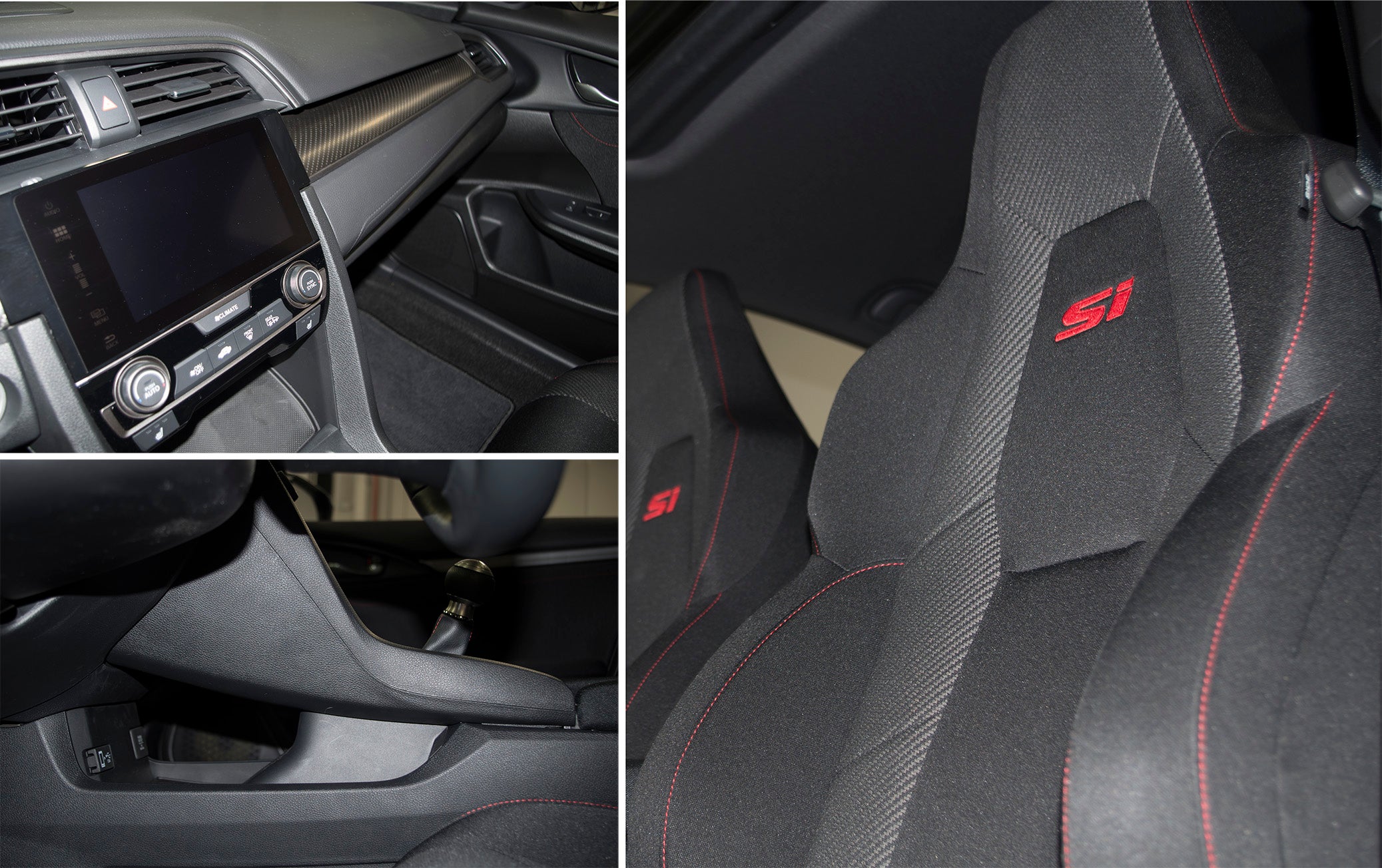 Lateral motion is significant, but not sloppy. You will feel yourself being pushed against the seat bolsters as the Sis suspension pitches from side to side, and while this is part of what's keeping you well below Porsche pace it goes a long way to making low-speed aggressive driving feel fun.

There's true joy in driving an Si because it isn't idiot-proof. It's not hugely powerful and traction control can't really be disengaged without going through a crazy Konami code, but the car sinks into a distinct groove between "control" and "imminent danger" that goads you into driving harder while keeping your neck hairs stiff.

The car's interior is relatively reserved, but there are some toys tucked into the gauge cluster you can cycle between including a shift light, boost gauge, g-force meter, brake and throttle meter, and a stopwatch. None of that stuff really helps you drive, but it can help remind you that you're having a good time. 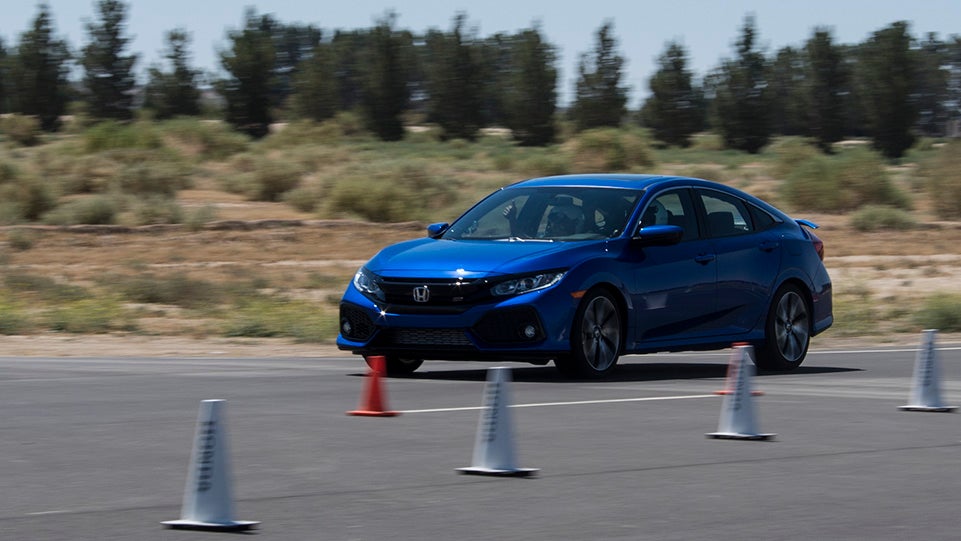 You read the spec sheet right: Honda claims the Si makes peak torque as low as 2,100 RPM. If that's true, the car sure hides it well. Even though this Si's power on paper is superior to its predecessors, the acceleration still has the same "wait, wait, whoa" sensation you'll remember if you ever owned a VTEC Honda.

Any car that's set up to be both fuel efficient and fast is going to manifest this to some degree, but I was a little disappointed to realise Honda's fresh new turbo technology hasn't really cured the low-end power problem that's dogged these cars for decades. Especially after looking at the factory power claims.

And while we're talking turbos, I have to say I didn't see the boost gauge pass 16 psi and it spend most of our driving hanging out at around 14, not 20 as advertised on the spec sheet.

What's Left To Look For 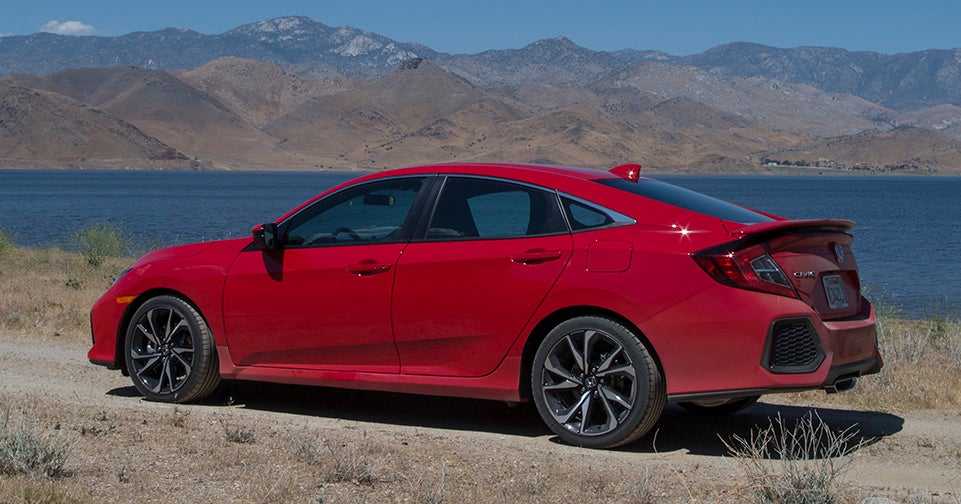 The sport compact market is fiercely competitive, and obviously, it will be important to take a hard look at the Civic Sis rivals before you decide which one to buy. You have a ton of choices in this market and that's great news for all enthusiasts.

Spec sheets tell some of the story, but it will be worth taking the time to really feel the difference between the cars in this class, even if you're just comparing the experience of throwing shifts.

I'm also pretty interested to see what the aftermarket does with this car. Perhaps its lack of low-end power could be rectified with an easy fix that wouldn't cost you much fuel economy. And you've got a lot of headroom there anyway- we didn't drive gently enough to hit anywhere close to the EPA figure of 38 mpg highway but we hung out in the high-20s all day with a heavy foot on the gas. 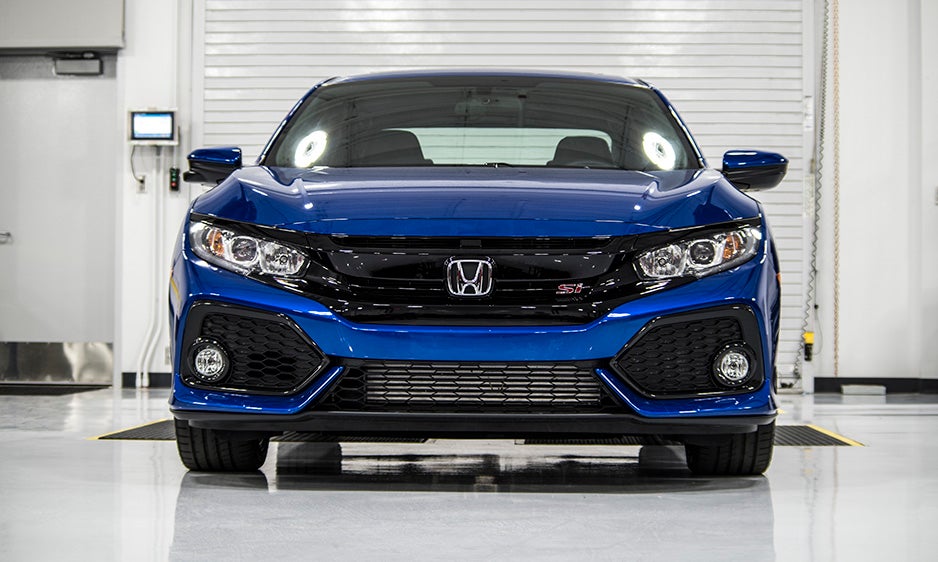 The 2017 Honda Civic Si feels softer and heavier than the sport compact cars you grew up with. Its straight-line acceleration is just ok, and there's nothing particularly exceptional or inspiring about the car's design.

But this car was never about exceptionalism, it's about versatility. The Civic Si is great at just being an everyday sporty car; it's efficient, it's easy to drive, and based on Honda's rep I think it's safe to say it will probably run for a couple hundred thousand miles if you change its oil on time.

It doesn't have an immense hidden power that taunts you into driving like a lunatic every time you leave the driveway, but when you do get a wild hair to squeeze the tall pedal the car feels willing, excited, even, to get up and break a sweat with you.

The Civic Si is honest. It's an economy car with personality and some power to back it up, and that's all you really need to get some joy out of driving with a modest budget and a normal life. This car won't keep you up at night, but it will definitely have you making up excuses to hit the road.