We got two new trailers for Spider-Man: Homecoming yesterday, and while there wasn’t a ton of new info, there was still enough that we wanted to point it out — first and foremost, that Spidey’s excitement to be fighting his fellow superheroes is just straight-up lovable.

The least believable thing in this movie is that Peter found a running train. (All images: Marvel/Sony) 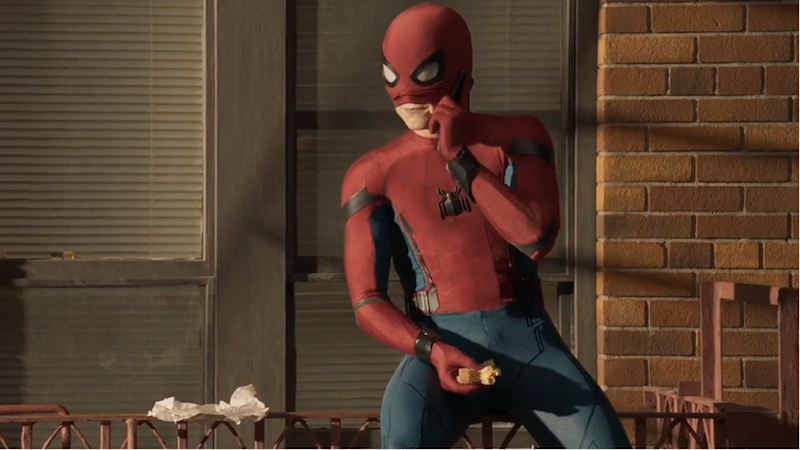 The first part seems to be taking place right at the beginning of Homecoming, but also during Civil War, with Spider-Man (Tom Holland) commenting on the airport fight as it happens (from a camera that I’m sure is in no way a security problem).

He is very adorable, very excited to have to taken Cap’s shield, and also very baffled by the sudden appearance of Giant Man. It’s nice to see that as quippy as Peter was in that fight, he was still an extremely excited nerd underneath it all.

We also had a post-fight scene where Peter just loses it about Tony calling him into the fight in a hotel room, only to be told that the walls are “very thin” by Happy Hogan (Jon Favreau). I think we also now know who Tony (Robert Downey Jr.) left Peter with after the fight, while he dealt with… the rest of Civil War.

Honestly, this bit is so great, I felt compelled to include the full trailer here, just in case you missed it. At least watch these first 25 seconds, seriously:

As for the rest of the international trailer, the biggest thing in it is the confirmation and expansion of the Vulture’s (Michael Keaton) motivation.

“The rich and the powerful, they don’t care about us. We have to pick up after them, we have to eat their table scraps,” we get in a voiceover. We also see him salvaging what appears to be one of the Chitauri bikes from the first Avengers, saying that you have to use their technology to do it because of how tough it is.

We’ve heard a lot that part of the Vulture’s anger in this film comes from Tony creating Damage Control to clean up after these big events. So most of the Vulture’s speech in this trailer is an extension of that.

“The world’s changing, we got to change, too,” says the Vulture.

In case it was still unclear, Spidey seems to be spying on the Vulture doing tests and then reporting to Tony that “Someone is collecting stuff from Avengers battles and building these crazy weapons”. Got it? Are you finally clear on the threat in this movie?

We see a bit more from the ferry fight in the other trailers and then the Vulture, again: “Eight years without any trouble from those bozos up in Stark Tower. Then this little bastard in red tights shows up. He thinks he can tear down everything I built?” I think the second bit about Spider-Man is spliced between those lines, by the way, and the rest of this is about Iron Man ruining his business.

Now we see that the plane fight is actually a plane heist with the Vulture trying to steal a bunch of Stark tech intended for the Avengers. “We’re gonna put ’em out of business. We’re gonna take everything they got,” Vulture again.

There’s even less of consequence in the other trailer, other than exploring the new suit and the fact that Tony gave it a heads-up display similar to his own.

Even more dialogue from the limo scene between Tony and Peter, which is now, by my count, a billion years long. But it has Peter getting to keep the suit and eagerly asking about the next “retreat”, because the whole cover for Spider-Man is now that Peter works for Stark Industries as an intern. He also uses this as an excuse for where he’s going after school.

Like his video diary, Peter’s reports on his crime-fighting to Tony are simply adorable. But I am left to wonder if Tony actually asked for this or if Peter’s just doing it of his own accord because he loves Tony so much. Also I wonder if he has to report what he’s doing because of the Sokovia Accords, which are presumably still in effect and which Tony did sign, despite how everything else went down in Civil War.

We have seen bits from this robbery and from this explosion before, but this seems to be the first time they have been linked together. I bet this is what puts Peter on the Vulture’s trail. Spider-Man says the weapons are “crazy dangerous” and then is plucked off a roof by the Vulture, presumably as part of the plan to stop everyone butting in that he talks about in the international trailer.

I thought we’d all like a still of Donald Glover’s character telling Spider-Man to get better at being intimidating.

And one of Zendaya’s character asking where Peter always goes and then explaining that she really doesn’t care.

Finally, we learn that the suit has a lot of functions inhibited by a “training wheels protocol”. I do think we’re going to see Peter try to bypass them to get to things like the spider drone on the suit.