Should You Bring A Llama To Your Wedding? 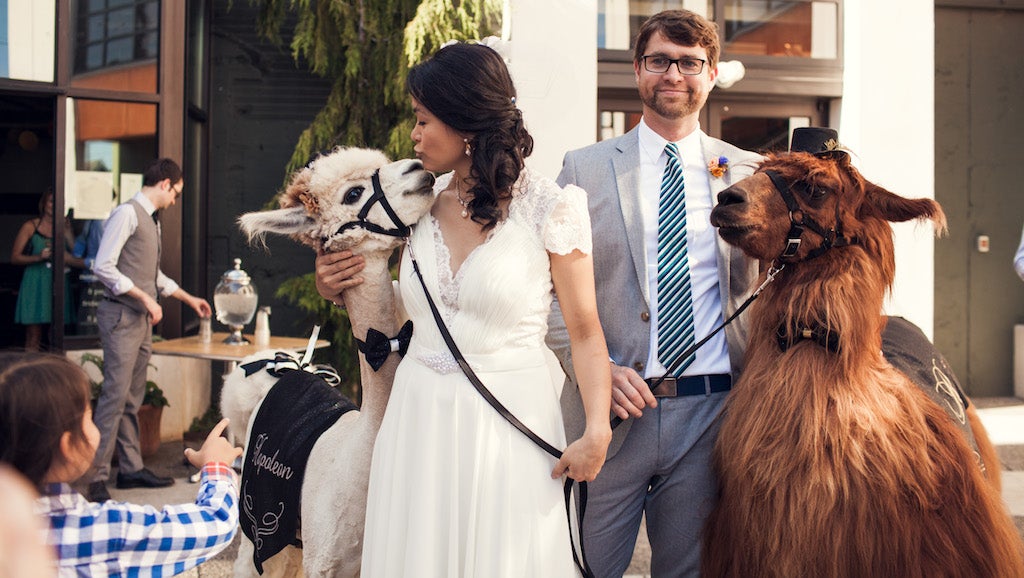 Weddings have seen some interesting trends over the last few years, ranging from bridal diapers to Taco Bell matrimonies. With the rise of FOMO-inducing platforms like Instagram, it’s simply not good enough to be in love with someone — your love has to be the best, and everyone else’s utter bullshit.

The latest attempt to claim insta-supremacy is pretty cute. Mountain Peaks Therapy Llamas and Alpacas, a not-for-profit based in Washington State, has gotten a lot of buzz this week for bringing its animals to weddings. For a fee, the organisation’s llamas — Rojo, Smokey, Diego, and Jean-Pierre — will go to your wedding dressed like dapper party guests. All proceeds go to funding Mountain Peaks’ therapy and educational programs, so all around it seems like a pretty nice thing to do — not to mention, oh my god the pictures.

Gaze upon them in wonderment.

Clearly, Mountain Peaks has their shit together. These animals are highly socialised and, barring any freakish outbursts of rage, probably not going to destroy a wedding party. That said, if you’re thinking about bringing a llama to your wedding, you might want to think a little harder before being so easily wooed. And trust me, it is very easy to be wooed.

“I don’t think llamas at weddings is equivalent to horse carriages in cities (because that shit is awful), but I would not recommend using a llama at a wedding,” conservation biologist Imogene Cancellare told Gizmodo. “It’s likely stressful [for the llama] to be in an unknown, stimulating environment. Also, depending on the location and time of year, standing in the hot sun for a ceremony and the travel (trailering) that goes with it could involve heat stress. Llamas can be aggressive when stressed or isolated.”

“Berserk llama syndrome happens when llamas are not well socialised with other animals and can exhibit dangerous outbursts as the result of thinking they are the alpha over humans.”

If you absolutely must have a llama at your wedding — or any social event for that matter — there are a few things to consider. One of them is that you must know your llama, as an unsocialized one could wreak havoc. In some rare cases, male llamas can snap into a bizarre fit known as beserk llama syndrome.

“Berserk llama syndrome happens when llamas are not well socialised with other animals and can exhibit dangerous outbursts as the result of thinking they are the alpha over humans,” Cancellare said. “I think the trend of using llamas for weddings is probably great for local farmers, but unless you can guarantee that the llamas are treated well, safe during the process, and aren’t actually miserable I probably wouldn’t do it.”

Even when they’re not going alpha-llama-beserk on your wedding guests, it’s important to keep in mind that llamas, like people, can sometimes be a little crabby. “I was chased by a llama once when I was doing bear research, so maybe I’m biased,” Cancellare explained. From her anecdotal experience, alpacas have been kinder.

“Getting overheated would be my concern, not to mention defacating while walking down the aisle”

Lastly, with any animal, the risk of shitting must be considered. “Getting overheated would be my concern, not to mention defacating while walking down the aisle,” Cancellare said. “Llamas, however, are incredibly clean animals and usually only use a latrine, unlike goats that poop everywhere.”

So to the question of whether or not you should bring a llama to a wedding, the answer is: Maybe. A place like Mountain Peaks presumably has skilled handlers. “All of our animals have been hand-selected to be used for therapeutic interactions inside senior communities, rehab facilities, children’s hospitals, and for all kinds of special-needs groups, so they are extra gentle and huggable, with no spitting, biting or kicking that is normally associated with llamas,” a spokesperson told Gizmodo.

But as a general rule of thumb, don’t bring livestock to a wedding unless you’ve really done your homework, and are prepared to pick up some shit.

“If I wanted a llama at my wedding, I would want to visit the farm providing the service to ensure the animals are well-cared for,” Cancellare said. “I would also ask for a list of previous clients to inquire about their satisfaction. Private petting zoos are not always great places for animals, so I wouldn’t want to put my money towards a facility that manages its animals poorly.”