Not Even Disneyland Can Escape Marvel's Love Of Teasers 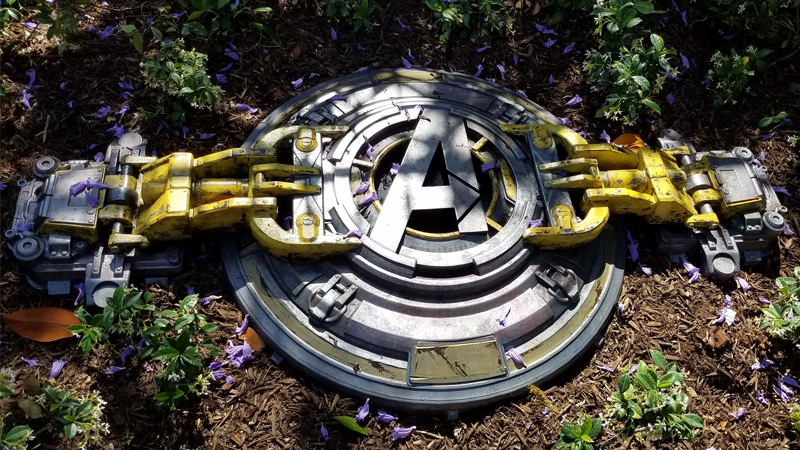 The Marvel Cinematic Universe's penchant for relentlessly teasing future films has already taught moviegoing audiences to keep their butts in their theatre seats until the very end of the credits. Now, it's also going to teach theme park attendees to keep an eye out for clues to their next ginormous queue-generator.

While fans desperate to ride the new Guardians of the Galaxy Mission Breakout attraction at Disney's California Adventure this weekend were spending most of their day snaking through queues that stretched across the entire park, waiting for them right at the entrance of the ride was an subtle teaser for a future attraction that presumably most people would have missed after being in line for upwards of seven hours. Thankfully, Marvel's own Ryan Penagos was kind enough to offer a look at the clue, which is...

A hatch! With an Avengers logo on it! Which presumably means Earth's mightiest heroes are next in line for the Disneyland treatment.

Apparently the hatch wasn't the only teaser for future Marvel content at California Adventure on display over the weekend, either. Both Digital LA and Micechat.com (via /Film) reported hazmat-geared scientists and men in black suits with Avengers logos on them were hanging around in the vicinity of Mission Breakout. Seemingly going unnoticed, they were also meant to tie into the hatch as a hint of what was to come for Disney's long-rumoured expansion into Marvel-based rides.

We already knew that Mission Breakout was kickstarting it's own different "Marvel Theme Park" universe, separate yet thematically linked to the universe of the Marvel movies. So as absurd as that is — we now live in a world where the shared universe craze applies to theme park rides! — maybe we shouldn't be too surprised that even as Disney and Marvel opened one Marvel Comics ride, there were already teasers for more on the way hiding in plain sight. After all, that's basically what the movies are like at this point, too.