With Microsoft's Build developer conference just two days away, the company has revealed one of the most anticipated announcements from the event: A new Cortana-powered speaker made by German audio giant Harman Kardon.

Now, it's fair to see this speaker for what it is: An answer to the Google Home and Amazon Echo. Both assistant-powered speakers are already in homes across the US, listening to people's noises, noting their habits, and in general invading people's lives under the guise of smart home helpfulness. The new Microsoft speaker, dubbed "Invoke", will presumably do the good stuff, giving you updates on the weather and letting you turn on some soothing jazz for your dog with just a spoken command. Microsoft is also hoping that partnering with Harmon Kardon means its speaker can avoid one of the bigger problems with these devices — their tendency to sound cheap and tinny. 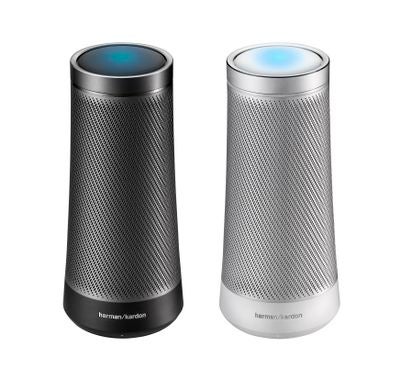 The Cortana-powered Invoke will have three woofers and three tweeters, which in layman's terms means it could sound pretty nice. It will also have seven microphones to listen for your barking orders.

In addition to being powered by Cortana, Microsoft's answer to Siri and Alexa, the Invoke's other big selling point will be Skype calling built in. So besides telling it to turn off your lights or add an entry to your Outlook calendar, you can tell it to call your mum, whom you refuse to communicate with via any medium besides Skype. This also means the Invoke could function as a slick-looking speaker phone, receiving Skype calls too. That would make it potentially more useful than either the Echo or the Home. Those speakers currently exist almost exclusively as founts of internet wisdom. Let Microsoft listen in on all your sweet sweet nothings.

While they can certainly be fun and convenient, speakers with voice assistants really only exist to collect information on users. The more information a company has on a person or home, the easier it is to sell to them, or sell information they have gathered on them. Earlier this year Google irritated some users when it used the Home to deliver unsolicited ads for Disney's Beauty and the Beast, and Amazon regularly notes what kind of products people are buying when they order them via Alexa. You should expect similar unnerving entanglement with your life from Microsoft's speaker.

Today's leak isn't the first we've heard of this speaker. Microsoft and Harman Kardon previously teased it back in December. Due to the rushed nature of today's announcement, though, further details on the Invoke speaker are scarce. We'll no doubt learn more about it, and Microsoft's plan to blanket our homes with Cortana, during Wednesday's Build keynote. Gizmodo will be covering the conference from Seattle, so stay tuned for more updates.