Meet The Bubu 502, The Least Sleek Car Ever Built We often refer to cars as boxes on wheels, or we describe car design in terms of numbers of boxes: one for van-like things, two for hatch/wagon-like things, and three boxes for sedan-like things. With this common way of thinking, you may expect that a car that was a literal, no-joke box-on-wheels would be something that wouldn't seem so weird, or alarming. You'd be wrong. If you don't believe me, have a look at that Bubu 502 up there.

The Bubu 502 also may very well be the most aerodynamically defiant car ever built. It's not just that it's not aerodynamic; it's actually a whole 'fuck you' to the very concept of aerodynamics. I'm pretty sure I've seen warehouses with a better Cd rating than this thing.

Sure, the Quasar Unipower had the same basic idea years before, but it never actually made it to production like the Bubu 502 did.The Bubu 502 was a very early product from one of my favourite niche automaker's Mitsuoka out of Japan. Long before Mitsuoka was turning Nissan Micras into tiny old Jaguars, they were building cheap, tiny microcars that, since they were only 50cc, could be driven without an actual driver's licence.

These cars only required a scooter licence to drive, and as such it was far easier and cheaper to get a licence for these. The popularity of the Bubu line seems to have been in the early 1980s, but crashed when the laws were changed in 1985 that made it no longer possible to drive such microcars on a scooter licence. 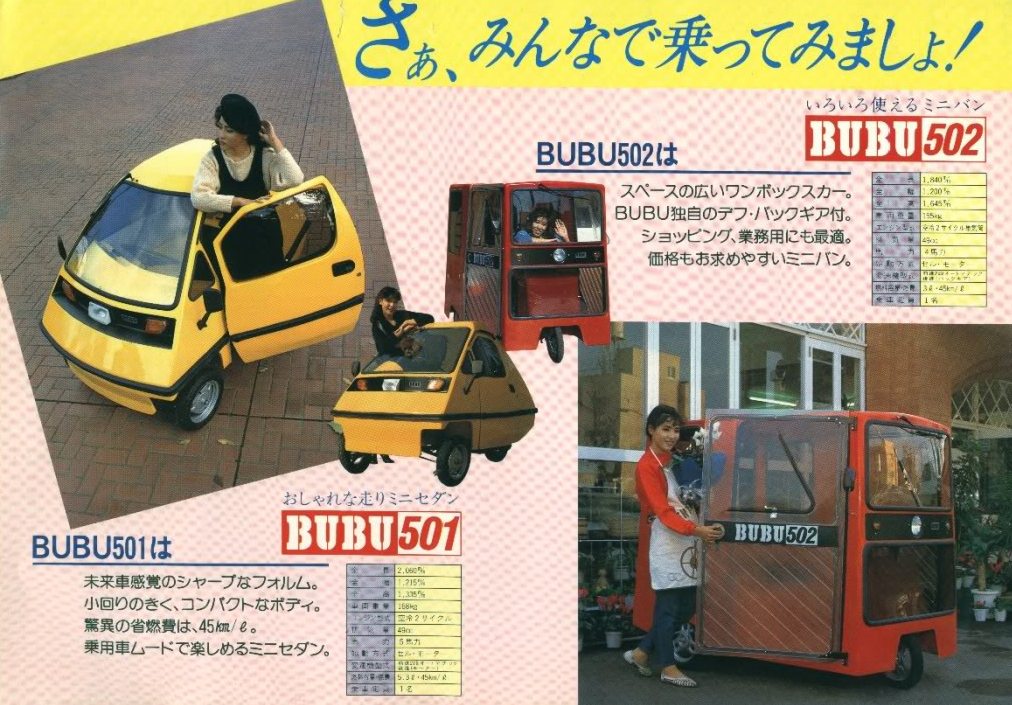 Bubu was actually a whole range of cars from Mitsuoka; there was the Bubu 501, a triangular-shaped 50cc microcar that I suppose you could think of as the sports car version of the boxy 502. That one was also sold as a Honda Zoe, and is perhaps best known for its ability to evade ninjas on roller skates. 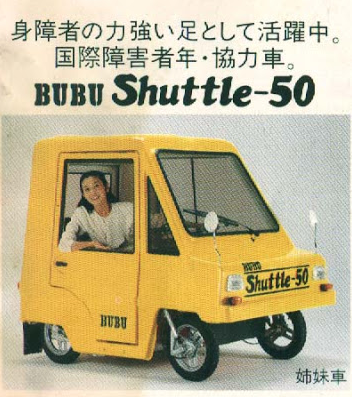 There was also the earlier Bubu Shuttle 50, which boasted a full four wheels and at least a sort of half-arse attempt to make it look like a normal car, at least in the sense that it had a mildly raked windshield, a stubby 'hood' and fairly conventionally-shaped doors.

You really have to admire the Bubu 502, though, for its brave determination not to be influenced by such insipid, cowardly ideas of what a car 'should' look like.

The 502 design was about as coldly, mathematically rational as possible: the maximum dimensions of the 3-wheeled microcar were decided, and then, basically, a box was built enclosing that volume. That's pretty much it.

That's not to say the 502 is devoid of fun or style; just look at this ad here: 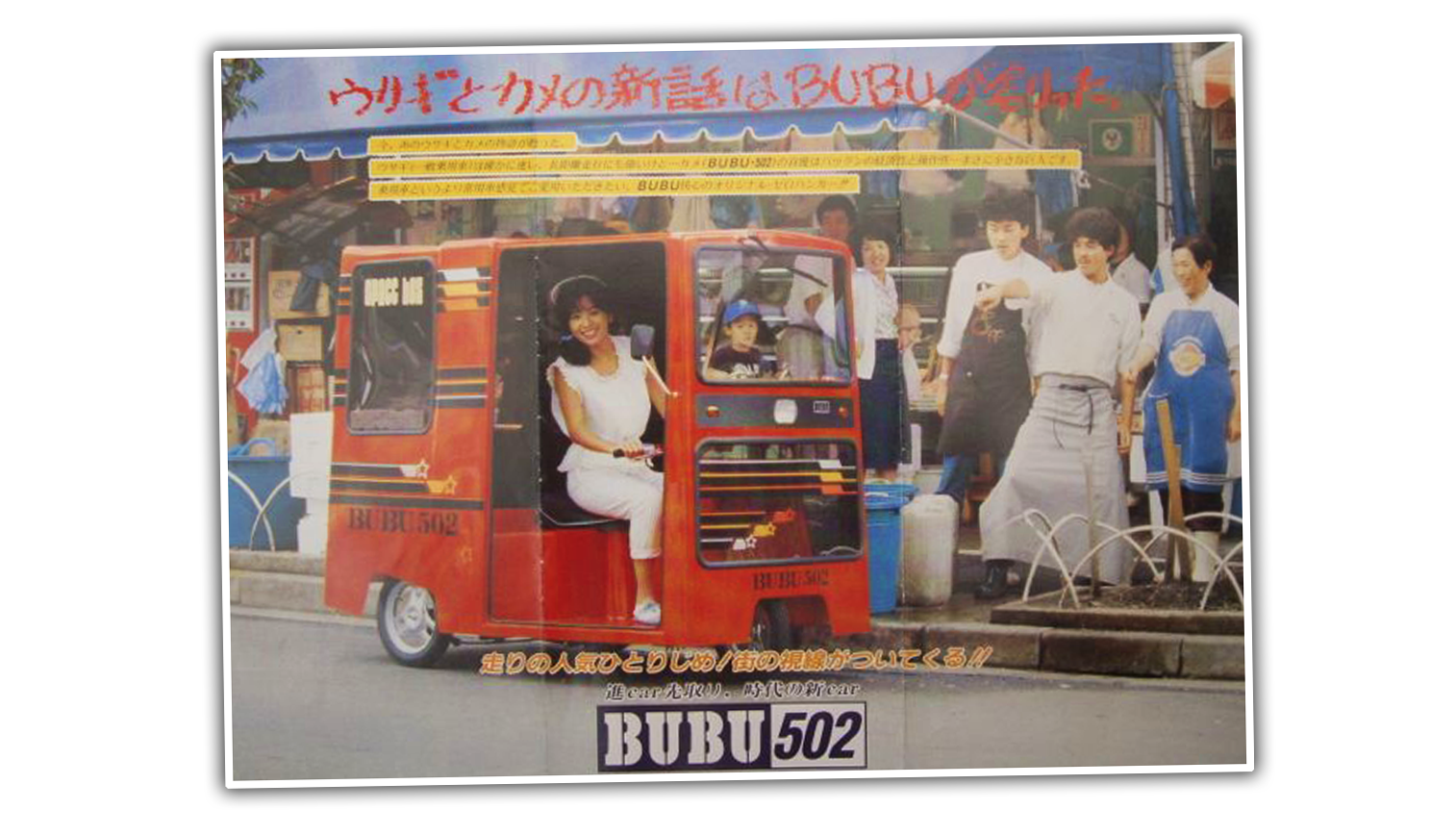 That looks like a stripe kit was available for the Bubu 502! Not just any stripes; I think some of those are even little shooting star motifs.

The second, lower window in the front is interesting, too. I suspect it's there to let you have some visibility to the ground, which must be helpful for avoiding potholes and other obstacles that would wreck that one little front wheel.

The doors appear to be both plastic and removable, like a cheap prosthesis, and have an interesting diagonal-slash pattern on them.

Mechanically, the 502 was the same as the other Bubu line, using a 50cc Honda scooter engine. The Honda scooter drivetrain didn't include a reverse gear, so a novel solution was used where an electric motor was directly coupled to one of the wheels to provide reverse motion.

On the 501, it was on the solitary rear wheel. The 502, with its tricycle as opposed to tail-dragging three-wheel layout may have had its motor on one of the rear wheels, though I've yet to find a picture of that.

As a career idiot, of course I find that I really like the Bubu 502. I bet the tollbooth-on-wheels shape actually proved quite useful for hauling people and things, and I'm pretty sure if you had a nice, well sorted one today, it'd turn more heads than a Lambo wherever you went.

Japan is still the global master at designing clever boxy cars, and I'd like to think the Bubu 502 is sort of a guiding spirit of those designs.