I Hope To God Amazon's New Echo Isn't This Ugly 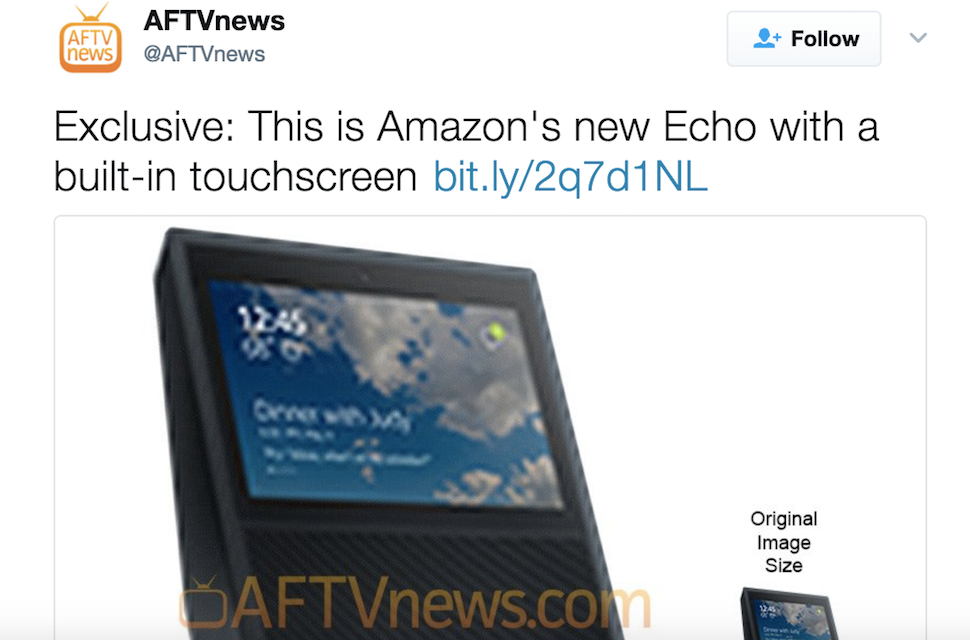 We had high hopes for the long-rumoured Amazon Echo with a touchscreen, but today, those hopes were absolutely shattered.

A new image of a hideous device that is purportedly the new Amazon Echo with a built-in touchscreen has been discovered by the site AFTVnews, who has recently become somewhat of a source for supposed Amazon hardware leaks. The product looks like an old Philco Predicta without any of the appealing parts. It basically looks like someone ripped a backseat TV out of a minivan and slapped it on a table. You're buying a big square box made to invade your family's privacy at all hours. Fun!

Exclusive: This is Amazon's new Echo with a built-in touchscreen https://t.co/MSKgWni50S pic.twitter.com/YJewy8dSfE

@AFTVnews Here, let me help you with that. pic.twitter.com/9YokBj4pXQ

AFTVnews says this is the Amazon Echo with a touchscreen that has been rumoured since it was first reported by Bloomberg in November. It also says it found the tiny photo on Amazon's servers.

This isn't the first time the site has claimed to find new Amazon hardware before it's officially released. "One of my scripts that regularly crawls various sites, in hopes of finding information about upcoming hardware, found the image you see above sitting on Amazon.com," the site wrote in a blog post about the Echo Look prior to that product's official launch. The site says it used a similar method to find this new photograph.

CNET recently reported that the new Amazon Echo with a touchscreen would be launched later this month. The last time AFTVnews found images of an unreleased product, it was shortly before the product was officially released, so that gives us at least some reason to think this new photo might be legit.

Sadly, we don't know much else about this device. Rumours have suggested it will have a camera on the front, and we imagine that will enable many of the same features available in the Echo Look. We also suspect that the speakers will be higher quality than the first-generation device. Our best guess is that the touchscreen will be used to serve up info (like the weather) at a glance, but it's easy to imagine developers using it for all sorts of new purposes.

We reached out to Amazon for comment, and an Amazon spokesperson emailed us the following statement:

We'll decline to comment on rumour and speculation, but thanks for reaching out.

[AFTVnews via The Verge]