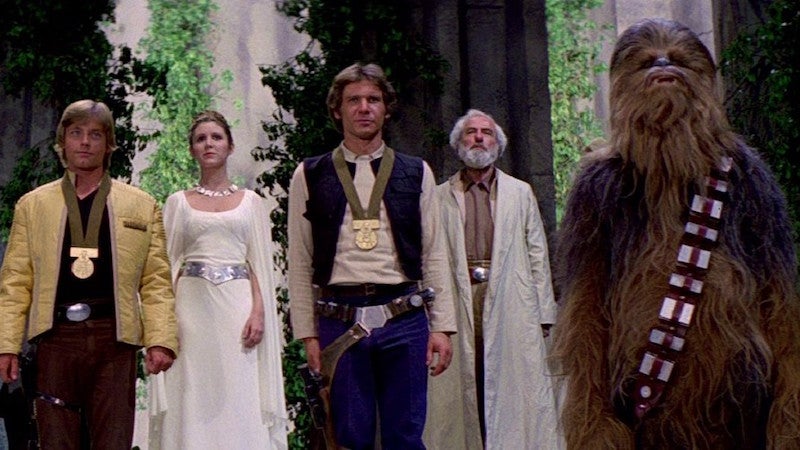 As of right now, Star Wars is officially 40 years old. Which is itself amazing in that I bet a lot of people are feeling very old right now. Equally amazing is just how many stories have been told in that universe in that time.

Star Wars: A New Hope — and I'm absolutely certain the comments will explode with people debating whether it is just Star Wars or A New Hope — was released on 25 May 1977 in a hilariously small number of theatres and with George Lucas still doubting that it would be a success. Of course, instead the movie generated the gigantic crowds and lines that it's still generating 40 years later.

Star Wars revolutionised special effects and merchandising while reinvigorating the space opera genre. It made household names out of its cast and created instantly recognisable music, visuals and lines of dialogue.

Which you all know. Because it's Star Wars. One of the best things about Star Wars is that it has one of the lowest barriers to entry of any fandom. Do you just like the original trilogy? Do you watch the cartoons? Read the comics? Play the games? Devote a truly terrifying amount of your life to reading every EU book produced between 1977 and 2012? Just read the books produced after Disney took over? Cosplay? Edit Wookiepedia? Write fan fiction? Make a fan film or fan art?

You can do one or all of these things and everything in between and still count. Star Wars is a universe that encompasses us all. And if you want to debate things in the comments, go for it. That, too, is one of the many gifts Star Wars has given us.