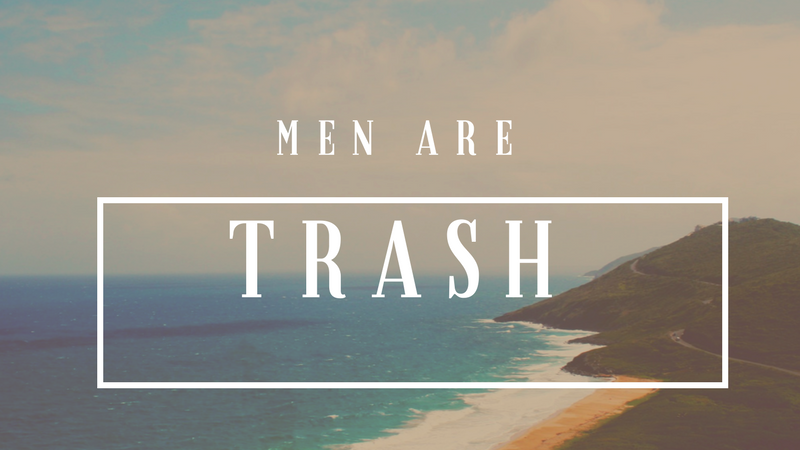 As the old saying goes, "men are trash." If you're a twenty-something woman, you've probably said this phrase to your friends at least once, possibly over alcoholic drinks after a man has done something bad. Or perhaps you've said it to coworkers after your dumb boss makes a boob joke in front of the entire company.

Apparently, however, sharing that sentiment on Facebook is a no-no. In fact, doing so can get your content removed, or even get you banned from posting for a period of time.

Phyllis Meehan, a 29-year-old corporate administrator living in San Francisco, told Gizmodo she changed her cover photo to an image that featured the phrase on Monday evening. On Tuesday evening, she said, she went back on Facebook — only to receive a message saying Facebook had removed the image, and that she was blocked from posting for 24 hours.

The image itself originated with Erin La Ninfa, who created it a few weeks ago using Canva, an online graphics design software. She has a website, "Just Another White Hoe," where she hosts a few of these kinds of images — the classic genre of saccharine, Pinterest-style inspirational images subverted with messages like "Happy Golden Shower." She originally shared it in a private group (she wouldn't reveal which one), and said women in the group shared it from there. As she explained to Gizmodo, "Obviously not all men are trash, however, the ones who are really upset about it are the ones who absolutely are." 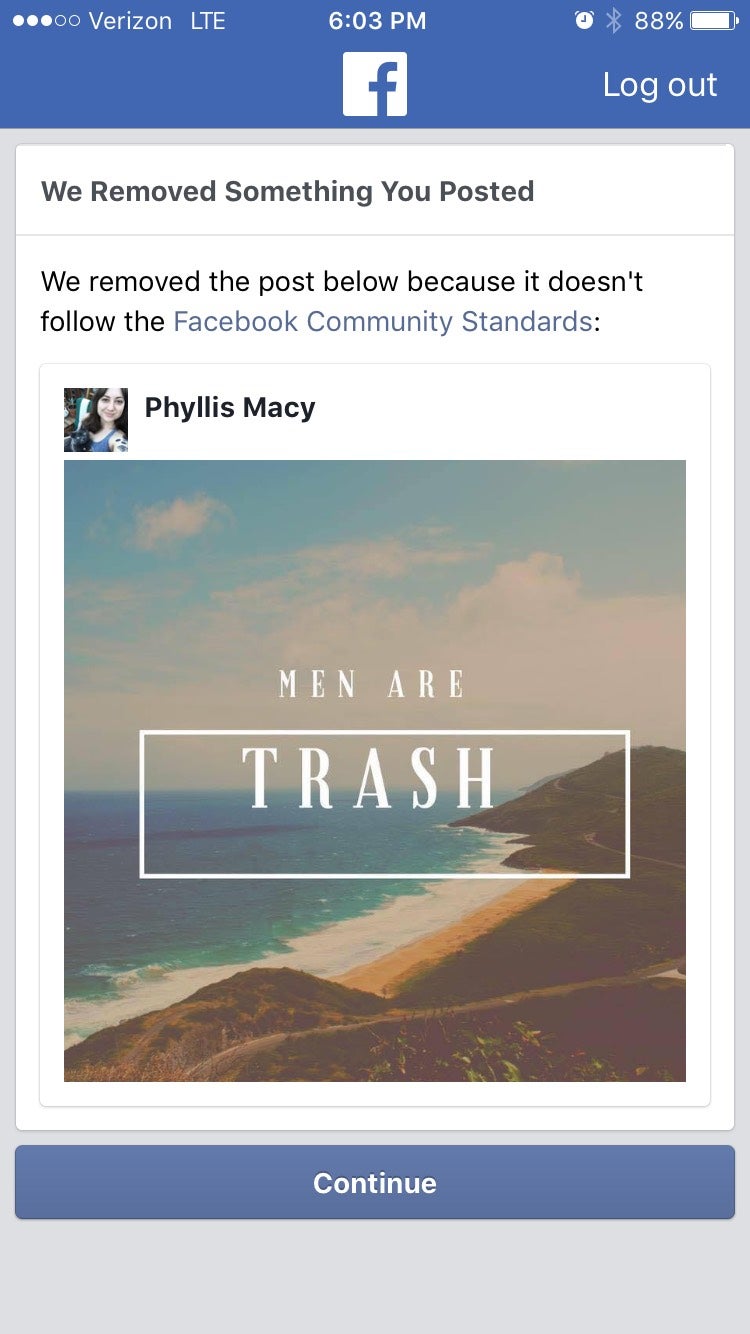 Then, she said, a couple of days later, she was told she was blocked for three days for posting a screenshot of "some sexist bullshit a man said" on Facebook with the caption "men are trash." 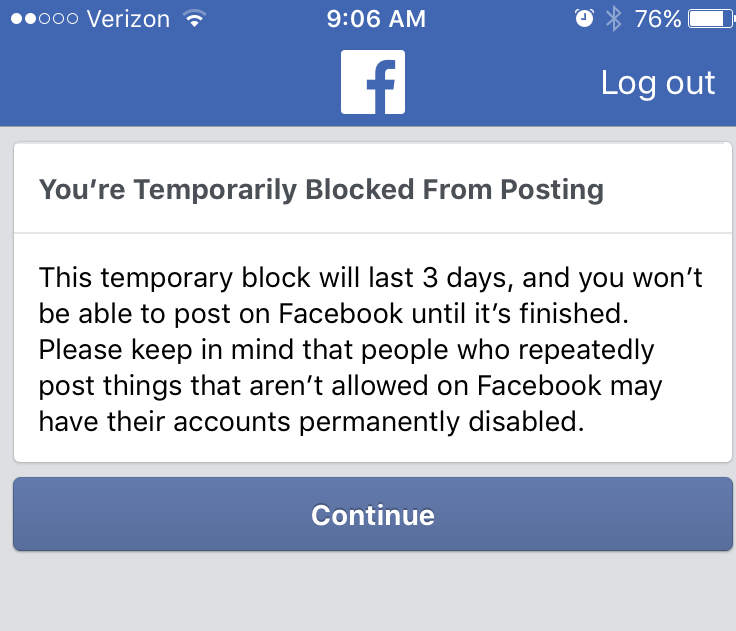 Meehan said she had "no idea" if any of her friends reported her. But several of Phyllis' friends told Gizmodo that they, too, had posted the original "men are trash" meme, only to have it removed by Facebook.

Chad Lavimoniere, a UX designer at a startup in New York, said that after Meehan's cover photo post was removed, he posted the image with the following text: "A friend of mine got reported/blocked from Facebook for 24 hours for posting this meme. Who are the fragile snowflakes, again?" That post, too, was taken down. 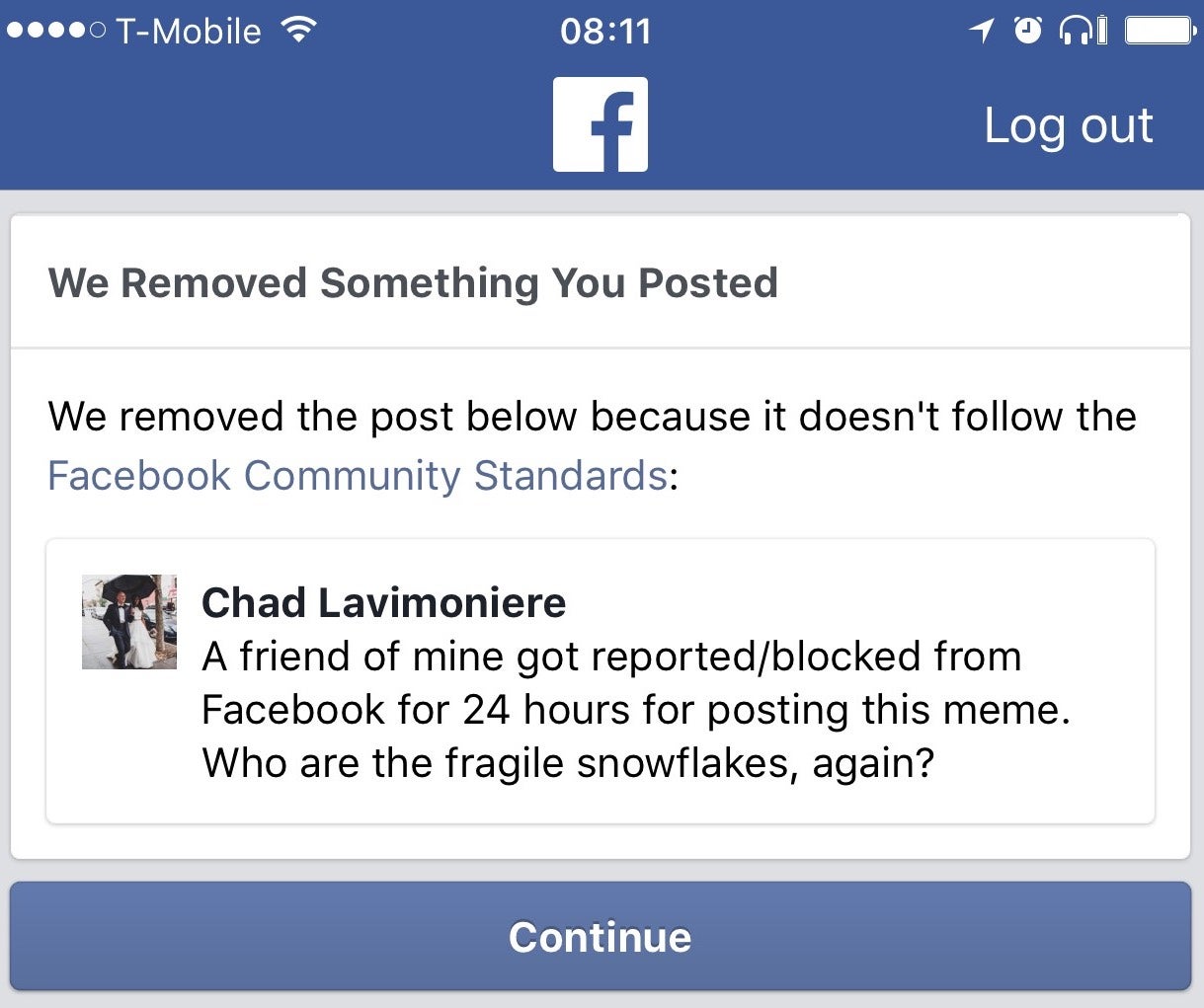 Another friend of Meehan's, Kayla Ceretti, told Gizmodo she posted the image and had it removed. And a third friend, Lily Leach, who is currently living in the Middle East, had the same experience. Lily told Gizmodo she "shared the 'Men are Trash' meme and wrote this caption: 'My friend Phyllis got banned from FB for 24 hours for sharing this. Where is the lie?'" She, like Kayla, tagged Phyllis in the post. Then, less than 24 hours later, she said she "was notified it has been reported and taken down." (A follow up post complaining about the meme's removal was not removed.)

It seems clear that Phyllis — and possibly Lily, Chad, and Kayla — had some Facebook friends who reported their posts as offensive. (I posted both the text "men are trash" and the image on my Facebook yesterday, and none of my friends have reported me.) But that still doesn't explain why Facebook would think the image or its contents were worth removing — and go so far as to ban users from posting altogether.

When we reached out to Facebook, we got an answer: The company said that, under its guidelines, the posts fell under the category of hate speech; it would only allow such posts when it had enough context to know it was meant as humour, or was being used self-referentially. So it's pretty clear: Facebook considers the phrase "men are trash" hate speech.

Facebook's guidelines ban hate speech that "directly attacks people based on their race, ethnicity, national origin, religious affiliation, sexual orientation, sex, gender, or gender identity, or, serious disabilities or diseases." The guidelines also "allow humour, satire or social commentary related to these topics, and we believe that when people use their authentic identity, they are more responsible when they share this kind of commentary."

As all four of the affected posters pointed out, much worse stuff stays up all the time.

Facebook clearly has — and has had for a while — a problem with content moderation. It's been criticised for removing a post about the Orlando shooting, and a meme about Brock Turner (which was later restored). And on the other end of the spectrum, it's been criticised for not removing racist content; in Germany, government ministers have pressured Facebook to act more pro-actively to remove racist content. It's also received criticism for not acting quickly enough to remove graphic content, like a graphic photo of a murdered woman or recent murders broadcast on Facebook live.

More to the point: "men are trash" is not hate speech. Largely, men who act offended by things like "men are trash" or "white people suck" are doing it to make a point, not because they really are offended; they seem to think being offended by a slur is a fun activity they're being left out of.

But I'm sorry, dudes: that just isn't how it works. "Men are trash" is simply not the same thing as sexist attacks on women, because you don't face the systemic oppression that makes sexist slurs so toxic. If you're a man and someone calls you a stupid trash man, wow, I'm sorry you had a bad day. If someone calls a woman a bitch or a slut, that's tinged with millennia of oppression.

Facebook acting like these are all the same thing — to put "men are trash" in the same category of speech as slurs — shows that, yet again, it just doesn't get it.