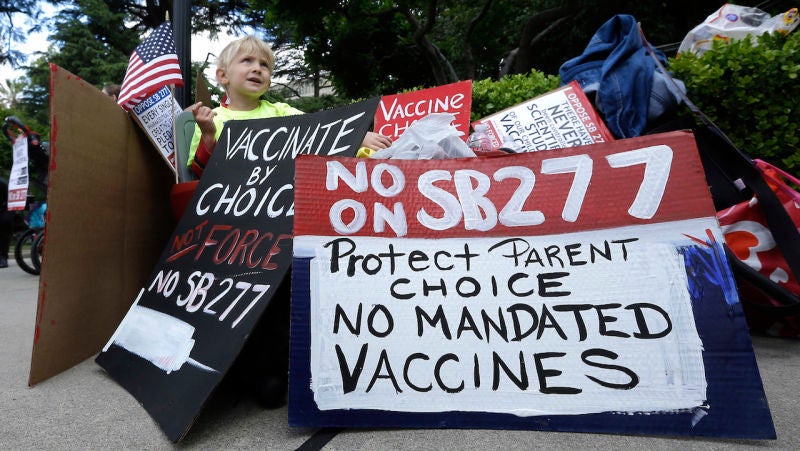 The US state of Minnesota is dealing with its largest outbreak of measles in nearly 30 years, with 41 confirmed cases reported since April. And most of the cases have occurred among a community of Somali immigrants, which the state health department says have been "targeted" by members of the anti-vaccination movement.

An anti-vaccine protest in Sacramento, CA in 2015. Image: AP

Minnesota's measles outbreak is the largest outbreak so far this year, and a prime example of the very real consequences of the growing anti-vaccine movement. Prior to 2008, vaccination rates in Minnesota's Somali immigrant community, the largest in the country, had been as high or higher than those in the white population. But in 2008, anti-vaccine activists began holding one-on-one meetings with families, stoking fear among parents that vaccines were contributing to autism in their children.

Among those meeting with members of the community was Andrew Wakefield, the discredited researcher who launched the anti-vaxxer movement. Two decades ago, he published a study suggesting that a popular vaccine against measles, mumps and rubella could cause autism. Though he lost his medical licence and the study was widely debunked and retracted, he nonetheless built up a following.

Vaccines avert between two and three million deaths annually, according to the World Health Organisation. But keeping diseases like polio, smallpox or measles at bay requires that the majority of children are immunised. As the anti-vaccine movement has grown, and immunisation rates have dropped, and diseases like measles that were once essentially eradicated have made a resurgence.

The autumn of 2015 saw the first death from measles in the United States in 12 years. This year, more than 60 people in 10 states were reported to have measles, the Centres for Disease Control and Prevention said. In Minnesota, all of the patients aside from one health care worker have been children under 10. The state expects the outbreak to continue for many months.

There is overwhelming evidence that vaccines are safe and effective and a powerful tool in fighting disease, but the anti-vaccine movement's messaging is clearly powerful, too.