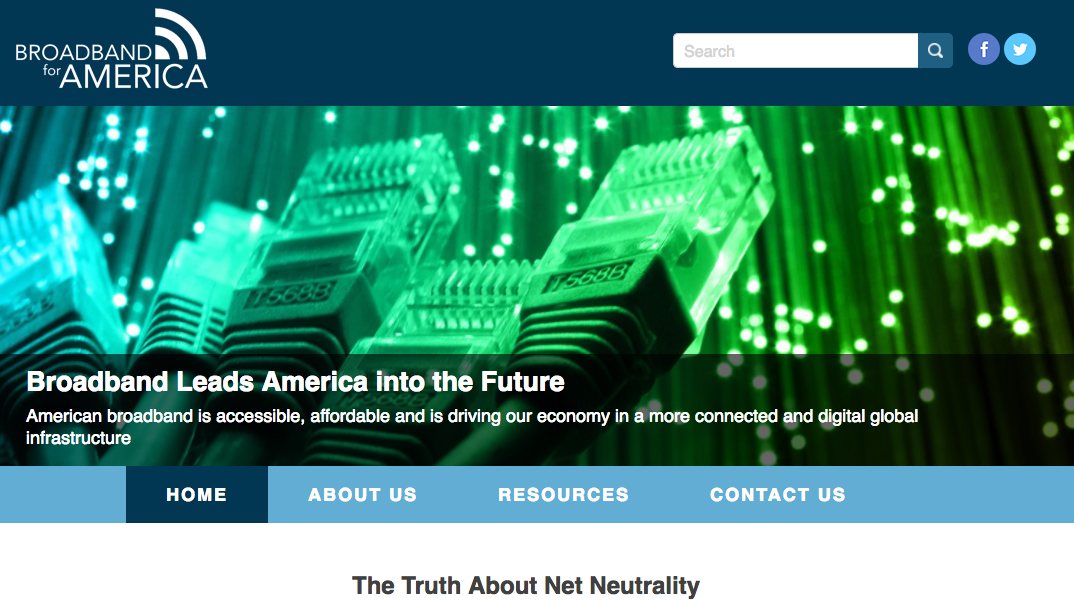 As we've previously documented, the forces pushing the repeal of the FCC's net neutrality rules — including FCC Chair Ajit Pai himself — aren't being totally honest about what they want. They will tell you that they support net neutrality, and a "free and open" internet, just not Title II. What they don't mention, of course, is that Title II is currently the only legally sound way to enforce net neutrality principles.

One of the most notorious dirty tricksters from the 2014 net neutrality battle, Broadband for America (BFA), has clearly adopted that messaging. As we discovered today, it's running ads next to US Google searches for "net neutrality", which proclaim the following: "Support Net Neutrality - Promote Broadband Innovation."

That doesn't mean a lot, and it means even less to someone who likely knows so little about net neutrality that they're Googling the phrase by itself. But you'd be forgiven for assuming that an ad that reads "Support Net Neutrality" would be for a site that, you know, supports net neutrality.

When you click through, however, you'll be taken to BFA's homepage, which contains a list of poorly-formatted talking points designed to mislead people into thinking it supports net neutrality. In actuality, the group supports repealing the rules:

Repealing Title II Utility Regulations Will Strengthen the Internet — Utility regulations deter investment in networks and put internet jobs at risk. They slow down innovation by requiring a government "permission slip" before launching new ideas. If Silicon Valley used these rules, Apple would still be stuck in the garage and Google would just be the wrong way to spell a really big number.

Again, Title II is the only way to enforce net neutrality that hasn't been knocked down by the courts. Moreover, Pai's proposed policy doesn't just concern Title II — it also looks at the other "bright line" net neutrality rules, like no blocking or paid prioritisation. He's "seeking comment" on what should be done with those, including the possibility of repealing them altogether. Don't be shocked if that ends up in the final proposal when it's released later this year.

BFA is also pushing "bipartisan legislation" on its website and in its ads:

Anti-net neutrality groups are really jonesing for a net neutrality bill they could push through America's Republican-dominant Congress, as it would likely favour their interests greatly.

We reached out to BFA for comment via their online email form and a voicemail box, and have not heard back.

BFA is a coalition group representing the biggest ISPs in the US and their lobby groups. It's received truly massive amounts of cash from the Internet and Television Association, formerly known as the National Cable and Telecommunications Association, which represents big ISPs including Comcast, Charter/Spectrum and Cox. NCTA gave $US10,125,000 between 2010 and 2014, according its tax documents; in 2012, its $US2 million donation formed the bulk of BFA's $US3.5 million budget.

BFA also has a history of shady tactics. In 2014, the group received criticism from some of its own supposed coalition members for misleading them on what BFA advocates for. Others who were supposedly members said they'd never even heard of BFA.

It's clear that the anti-net neutrality forces have realised they will never win if they fight on the merits of their crappy ideas, so they have decided to game the system and mislead consumers instead. Don't fall for it.