Amazon Just Announced The Touchscreen Echo Nobody Asked For 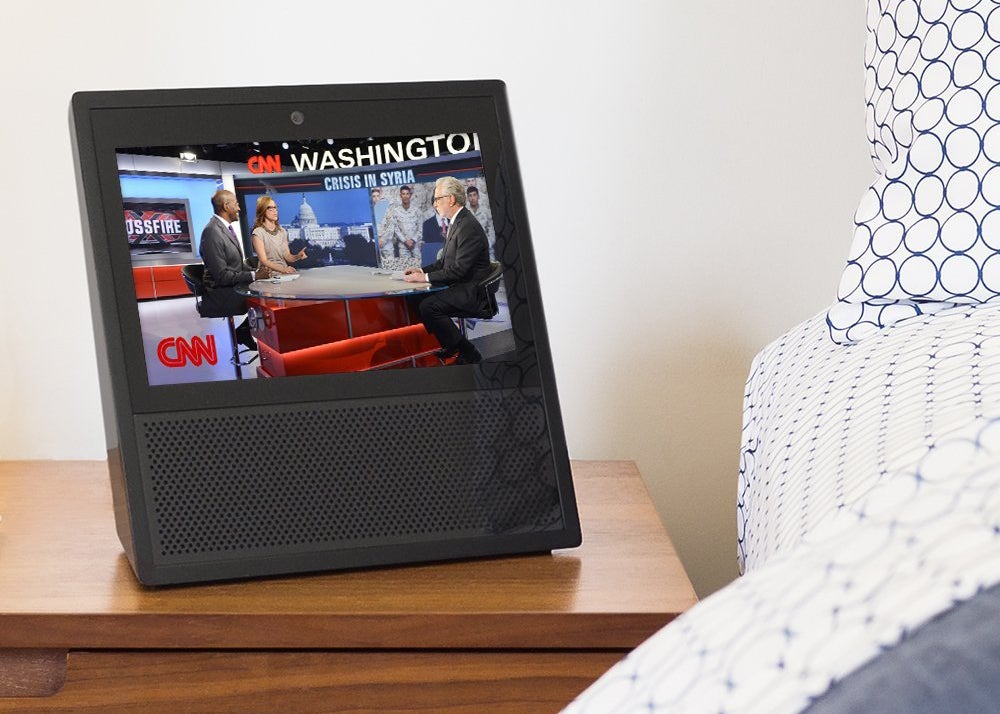 Hold onto your butts, ladies and gents, because Amazon just announced a new grandmaster Echo gadget with the company’s voice-assistant technology built in. It’s called the Echo Show. It has a touchscreen. It has Wi-Fi and Bluetooth. It costs $US230 ($311). And it’s even creepier than its siblings.

At its core, the Echo Show is just a regular Echo with a 7-inch screen. That screen lets you watch YouTube videos and see the weather forecast after you’ve asked for it. The new gadget also lets you make calls (both audio and video) and send text messages to other people using Echos or to mobile devices with the Alexa app installed. Thanks to Alexa integration with gadgets from Arlo and Ring, you can also see what your nanny cam sees.

But check this out: The Echo Show also has a 5-megapixel, front-facing camera. So now, instead of your Echo just listening to your commands, it can watch you as well. The Echo Show joins the screen-free Echo Look as the second Amazon Echo device to feature a camera.

So when exactly does the Echo Show listen to you and look at you? Amazon claims that the device will only start listening when it hears a wake word, like “Alexa”. The company told Gizmodo, “Only once the wake word is detected does it start streaming audio to the cloud, and the stream closes as soon as the utterance is complete.” It’s unclear when and how the company could activate the camera, however.

Beyond the basics, the device has a super creepy feature called Drop In, which effectively allows you fire up the camera to spy on your kids or siblings. Amazon explains, “For example, you can drop in to let the family know it’s time for dinner, see the baby’s nursery, or check in with a close relative.”

So it seems pretty weird that Amazon would suggest putting an Echo Show on your nightstand. Maybe one of your kids will just “Drop In” while you’re having sex! What a fun technology for people of all ages!

Mercifully, there are some limitations to Drop In powers. You can specify who can Drop In on you, and you can disable the feature for a specific device if, say, you don’t ever want anyone to Drop In on your bedroom activities. (Phew!) Amazon tells us that there’s a “Do Not Disturb” feature that would prevent someone from dropping in at an inconvenient time.

It’s worth pointing out that multiple leaks hinted at the Echo Show before its actual announcement. On Monday, for instance, The Wall Street Journal reported on the imminent arrival of a new Echo with a 7-inch touchscreen and “video calling capabilities”. The official announcement of the Echo Show comes exactly 24 hours after Microsoft revealed its Echo competitor, called Invoke. Microsoft’s device is a Cortana-powered Harmon Kardon speaker that can make Skype calls.

Amazon has a new Echo and this time, it has a camera built-in to tell you how ugly, or hot, your outfit looks. Dubbed the Echo Look, this forthcoming $US200 ($271) device has a depth-sensing camera that can take full-length photos and videos using just your voice.

As with any internet-connected device, there are some security concerns with the Echo Show. In particular, the addition of a camera should make you wary, since a webcam hack could give a bad guy a window into your home. That’s the reason folks like Mark Zuckerberg put tape over their laptop webcams. On top of that, police are already demanding audio recorded by Amazon Echoes in court, and Amazon is handing it over willingly. There’s little reason to believe that the company wouldn’t do the same with video recordings.

But hey, there’s a chance the Echo Show will be amazing. We haven’t gotten the chance to test it out yet but hope to review it when it’s available. Speaking of which, the Echo Show is available for pre-order in the US at Amazon now in black and white. It will start shipping in the US on June 28. Australian availability has not yet been announced.