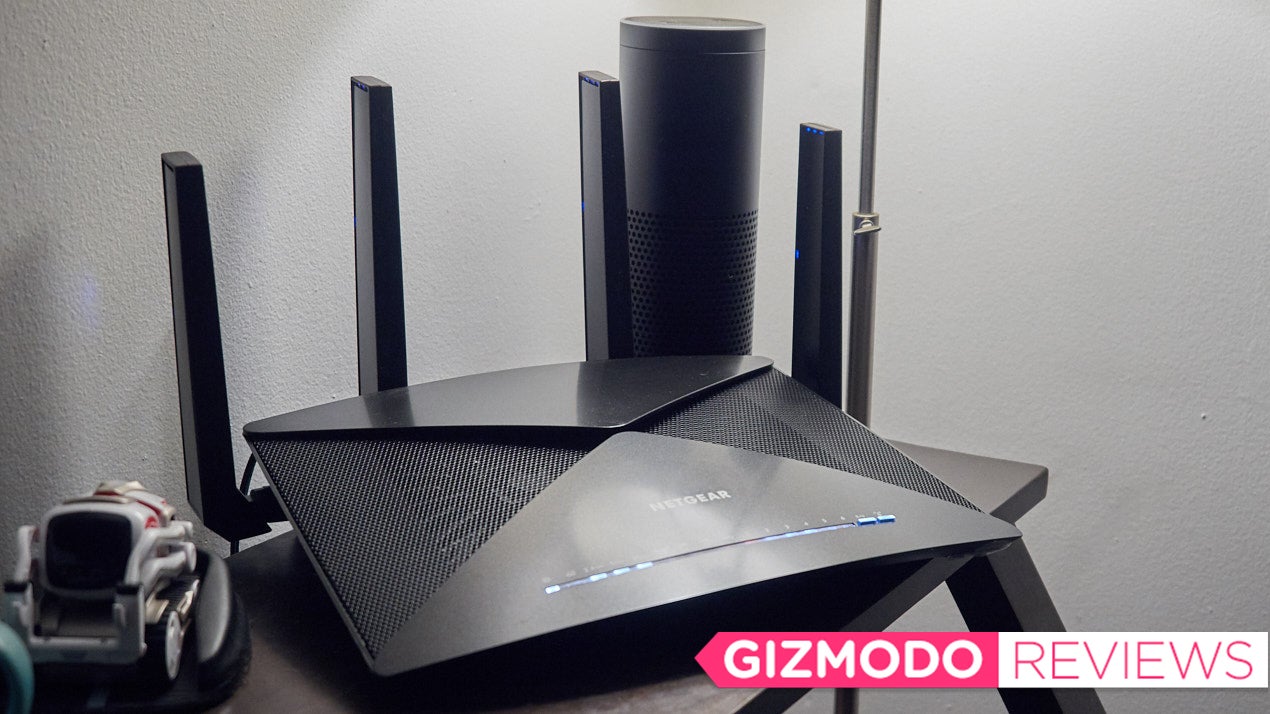 Once upon a time you could squeak by in life with an $80 router, which would do the simple job of blanketing your house in a respectable cloud of wi-fi. But in 2017, a satisfactory home network isn’t just a single cheap box tucked away in a corner. For many homes, it’s a whole system of routers, which work together to reach every single corner. These “mesh” router setups aren’t cheap, though. They start at $350 and many can be as pricey as $700). So what happens if you spend that same amount of cash on just one mega router? I connected my Brooklyn apartment using a Netgear Nighthawk X10 R9000 to find out.


If you live in an apartment or smaller home, you’re going to see a lot more benefit from one very powerful router rather than just a smaller mesh setup. The former is all about maximizing connection speed whereas the latter is intended to kill dead spots hiding in remote nooks and crannies. Netgear has been making home routers for two decades, and even though it too has waded into the world of mesh, it clearly still believes that big antennas and lots of power can make a difference.

The Nitehawk X10 R9000 runs on the new 802.11ad networking standard, which is theoretically seven times faster than the 802.11ac standard utilised by most routers now. I say “theoretically” because no standard is actually as fast in the real world as it claims to be in theory. We’re surrounded by interference, like other routers, not to mention human bodies, which are impervious to wi-fi. What’s more, 802.11ad is a new standard so it’s unlikely all of your gear can take advantage of it — even my brand new laptop is still on 802.11ac.

And as you would expect for a supercharged router, the R9000 is truly very fast. I don’t even have a device that can take advantage of its speedy AD wireless channel, but it still regularly gives me internet speeds 20Mbps faster than my three-year-old $US150 ($198) Asus RT-AC68U router. In testing, it transferred a 4.89GB file 14 seconds faster than the RT-AC68U. It also seems to have a wider reach. While taking the dog for a walk, I stayed connected to the R9000 for about 30.48m further than I did with the RT-AC68U. 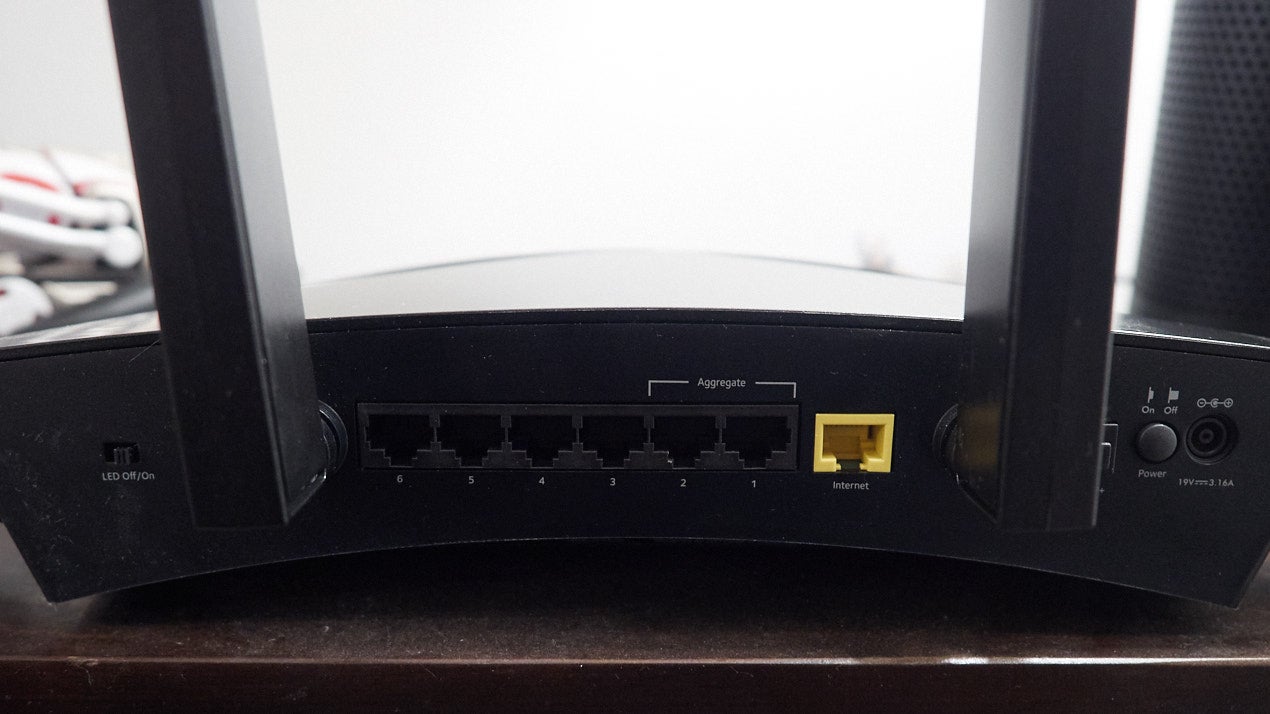 The R9000 has two more ethernet ports than usually found in a router. That’s useful as many new smart home hubs seem to require an ethernet connection.

But the R9000 isn’t just notable for its bleeding edge wi-fi standard. Reading the specs, this things sounds more like a computer than a router. It’s got a 1.7GHz quad-core processor, 512MB of storage, and 1GB of RAM. That’s because Netgear wants it to function as the brains of a home server. Besides filling your home with wireless internet, the router can serve as a file, print or Plex server — and it even claims to have VPN capabilities. In short, it wants to be the mini PC at the heart of your home.

I was especially pumped to test out the purported VPN support. Netgear merely claims the R9000 has VPN support. It doesn’t identify whether that support means a VPN server or client. A server, which lets you tunnel into your home network when you’re out of the house, is really common in big routers like the R9000. It does, and it works perfectly — letting me log into my home server while on the train to work. But the vagueness of Netgear’s VPN support claims left me hopeful that the R9000 had something a little more enticing than a VPN server. A VPN client.

VPN clients, which allow you to hide your home network’s traffic from creeps (or your own ISP), isn’t nearly as common in routers. In fact usually you have to install third party firmware like DD-WRT to get a VPN client on a router. That’s because VPN clients are resource intensive — they need a lot of processing power. With its crazy computer-like specs, the R9000 seems to be a perfect candidate for VPN client. Unfortunately, Netgear didn’t give it that client ability.

Instead, Netgear seems mired in the past, offering no real advancements in router tech beyond power. It’s particularly clear when you glance at the UI. While upstarts like Eero and Amplifi give you a gorgeous UI experiences, Netgear forces you to adjust settings in an environment you’ll recognise from 2008. In fact, I think I saw this interface back then when I set up my mum’s last router…in 2008. 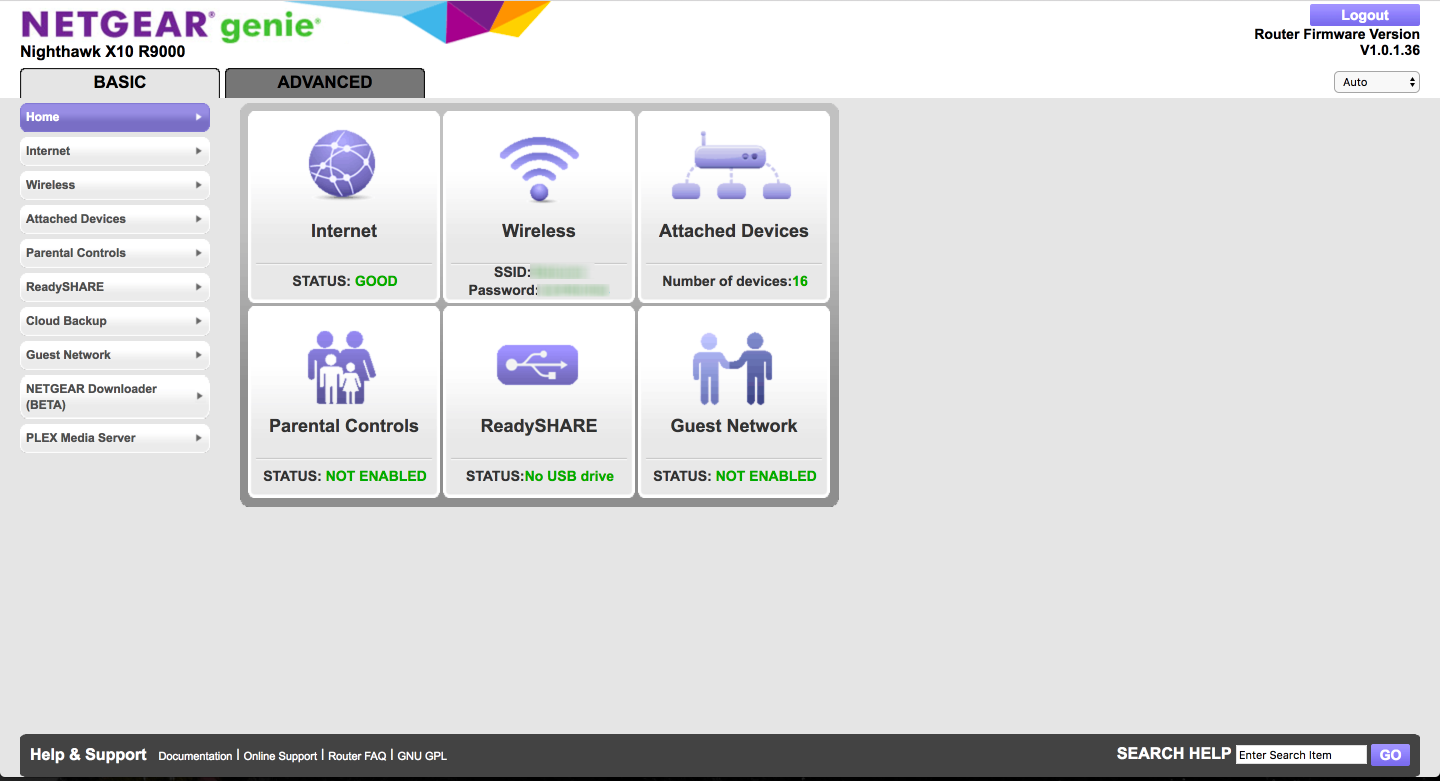 It makes using the router’s many server features feel unappealing. With two USB 3.0 ports you can plug in a couple of hard drives or a printer and pretend you’re in a fancy office with a fancier IT department, accessing the connected hardware with any computer or mobile device on the same network. Only any changes you want to make to that server’s configuration involve interacting with that eyesore.

The shining spot should be Plex: a great piece of software that turns any collection of music, movies, or TV you have on a hard drive into a Netflix-like library available anywhere you have internet access. If your DVR saves to a hard drive, or you’ve ripped all your movies and CDs, then Plex is spectacular. Netgear’s decision to give the R9000 Plex functionality feels smart — it’s actually the first router with Plex built in.

Unfortunately, it seems Plex is a little too much program for the R9000. While I could stream at 720p or lower quality easily, the router’s performance choked on my Blu-ray rip of Days of Heaven, stuttering along until I gave up and went for a walk. It also couldn’t handle multiple streams at once. I tried to stream the same 720p DVR’d episode of Supergirl to three TVs and found myself frustrated as it took its sweet time to load the video. 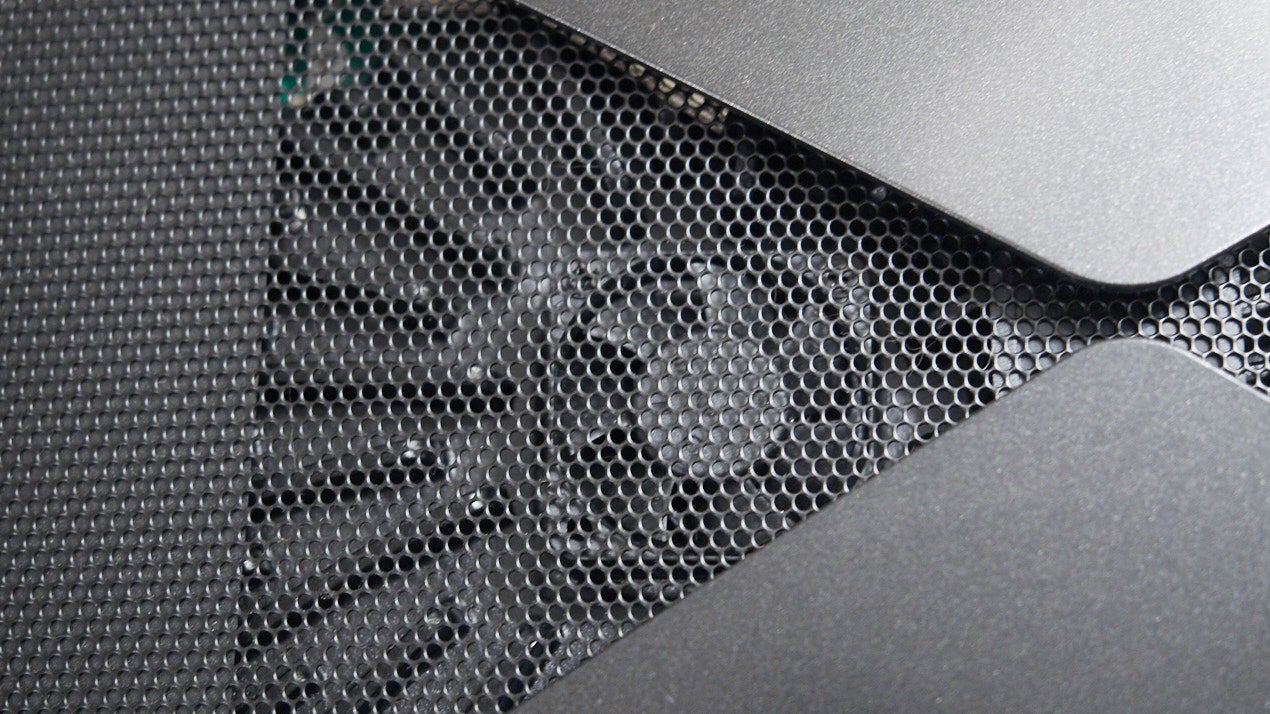 How often do you see cooling fans in a router?

Finally, the R9000 doesn’t seem geared towards the future home in which you’ll have a multitude of connected devices. Last month, Samsung announced a router with its SmartHub built in, and Google is reportedly planning on releasing a Google Home/wi-fi router combo next year. Yet, in the allegedly future-proof R9000, there’s no real sign of that smart part of the future. 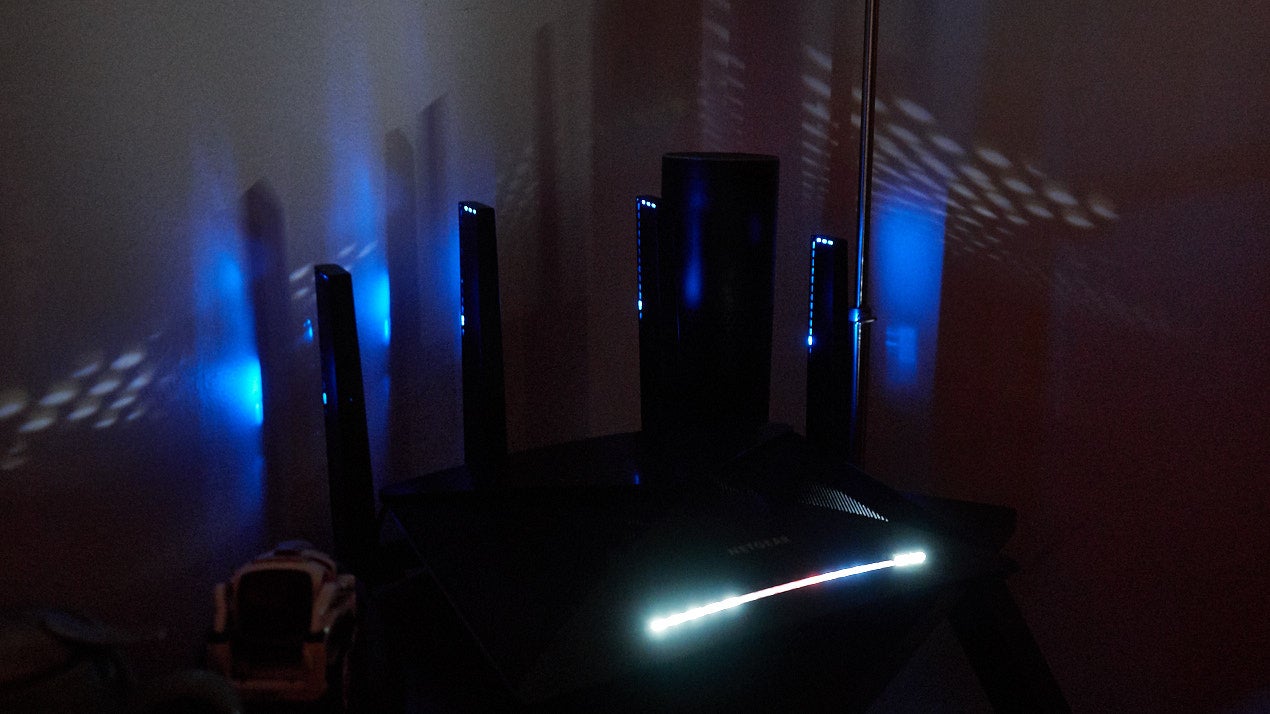 In my month with the R9000, it proved itself to be basically just an overpriced router. The hardware in the R9000 gives it extraordinary potential, but the execution is a bit of a letdown. Which, perhaps should be expected. The Nighthawk moniker doesn’t scream “super nice router for the power user.” It screams “i l1k3 internetz”. It’s a big hunk of unattractive hardware that’s hard to use and seemingly trapped in the past.