War Has Come On The Walking Dead, And It's About Damn Time 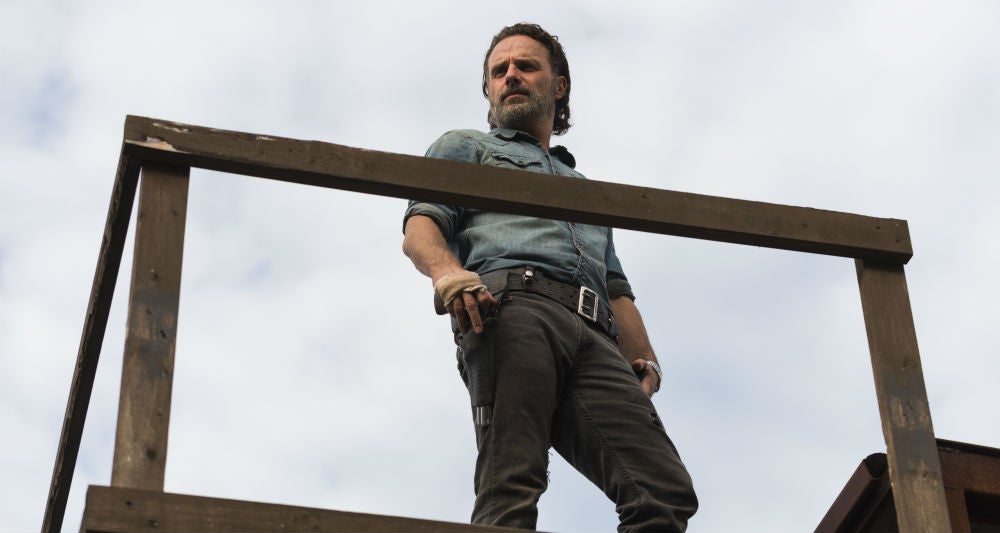 This was the episode. The one we'd be waiting for. After a season of being under the evil thumb of Negan, Rick and the gang were finally ready to wage all out war on The Walking Dead's greatest villain. Revenge was imminent. Or, so we thought.

Rick is about to have a bad day. All Images: AMC

Revenge only sort of happened, and that's mostly OK.

Let's start from the big picture and work our way in. What exactly was accomplished in this highly anticipated episode? Well, of course, Sasha's gone. We all knew that was going to happen. The character had more or less sacrificed herself a few episodes back, not to mention actress Sonequa Martin-Green got a new gig on Star Trek: Discovery. So a main character died, but it wasn't a huge surprise. More on her in a bit.

The other big thing is that Alexandria, the Kingdom and Hilltop all played their cards. Because Negan is so damn smart and backed Rick up against a wall, they were forced to band together and reveal themselves as one collective formative opponent for the Saviors. And the actual "war" was pretty good but, after a full season of build up, a little smaller than we expected.

I mean, they couldn't even kill off someone like Simon? Give the audience just a tiny bit of satisfaction? Somehow, in this huge battle with bullets flying everywhere, no recognisable Saviors died and Negan rode off with his middle finger in the air, a gesture that I'm sure felt a little too on the nose for some watchers of the show. Like it was the showrunners saying, "Yup, that's all you are going to get. Come back in October." 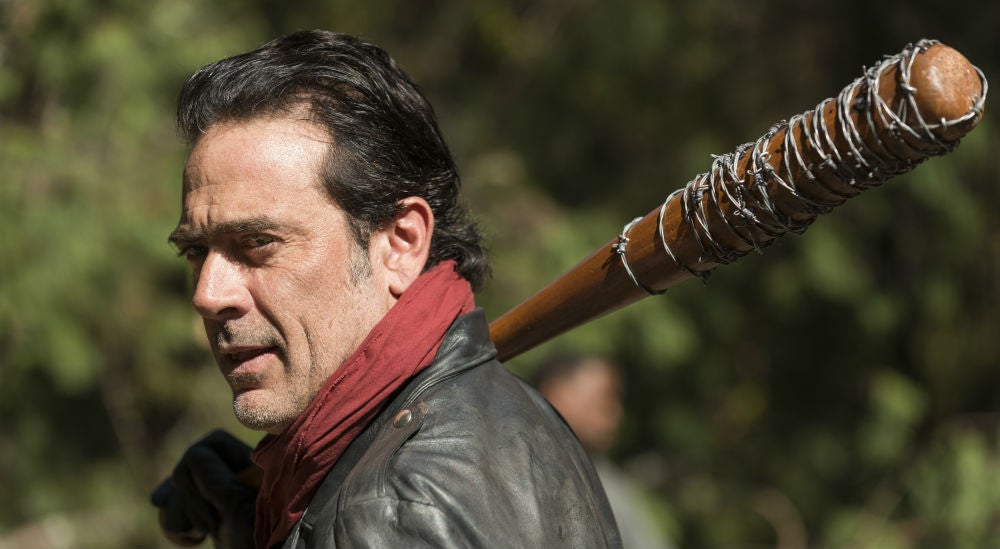 But it wasn't all bad. There was some really fine storytelling in this episode, even if it did slow things down at times. The episode started with and continued to go back to Sasha, in a mysterious setting, listening to music and remembering her final real moments with Abraham. It was fitting to give the character such a formidable, emotional send-off. The reveal that she was actually in a coffin was super cool too. And it's always good to get Michael Cudlitz back. Especially when he's saying lines like "We kick shit and eat snakes." Which should be a T-shirt, by the way.

And yet, as The Walking Dead's pace continues to slow down season after season, if the producers are willing to give Sasha such a grandiose, emotional exit, what does it mean for the other characters? Imagine what they'd have to do to make it OK for someone like Carol to die. Sasha, to me, was always a very good character, but her prominence later in this season never felt exactly right. And this send-off, while surprising and well-structured, kept the main storyline of Negan vs. Rick on the back burner.

What oddly did feel right, though, was the double cross of the Scavengers. Even though Rick and Jadis had made an agreement and built a respect, none of it ever felt genuine. It was an uneasy alliance to be sure so, when they revealed they were working for Negan for some kind of human compensation, it was a good twist. The only thing that sucks about it is that now we won't get to see what may have happened if Jadis had pressed Michonne to "lay" with Rick. Easily my favourite moment of the finale. 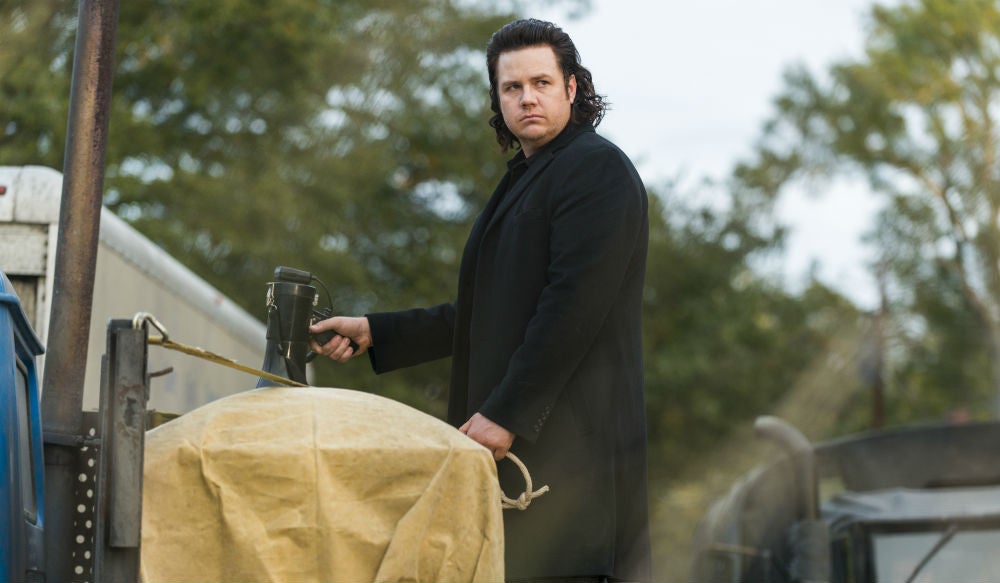 Which is saying something because this episode included two of the best showdowns we've seen on The Walking Dead. The big one being Negan showing up and basically telling Rick everything he wants (guns, murder, a pool table) or you are all going to die. Andrew Lincoln's sweaty face in these scenes was so good, because you literally can't think of a way out of this. Negan has Rick totally foiled. The whole plan shattered. And those kind of impossible odds are some of the things that make The Walking Dead so successful. Though, to be fair, did we really think Carl was going to die? You just sort of knew there was going to be the last minute save. You just didn't think it was going to involve a tiger, which ruled.

The other one-on-one conflict was Darryl and Dwight. To see them stare each other down — Darryl with Dwight's life in his hands — was incredibly tense and satisfying. You are totally unsure of how either of them will handle it. Is Dwight telling the truth? Will Darryl care? It was great. But, beyond those moments with the knife, I think the rest of the Dwight storyline was a little bit of a letdown.

Obviously, with the note at the end, we know Dwight's story is not over by a long shot. But to end last week's episode with his reveal, a reveal that had been built up and teased for months, and then kind of just wrap it up before the first commercial break could have been played better. I still think Dwight has a crucial role to play, but it would have been nice to get a bit more of an idea of what that is. 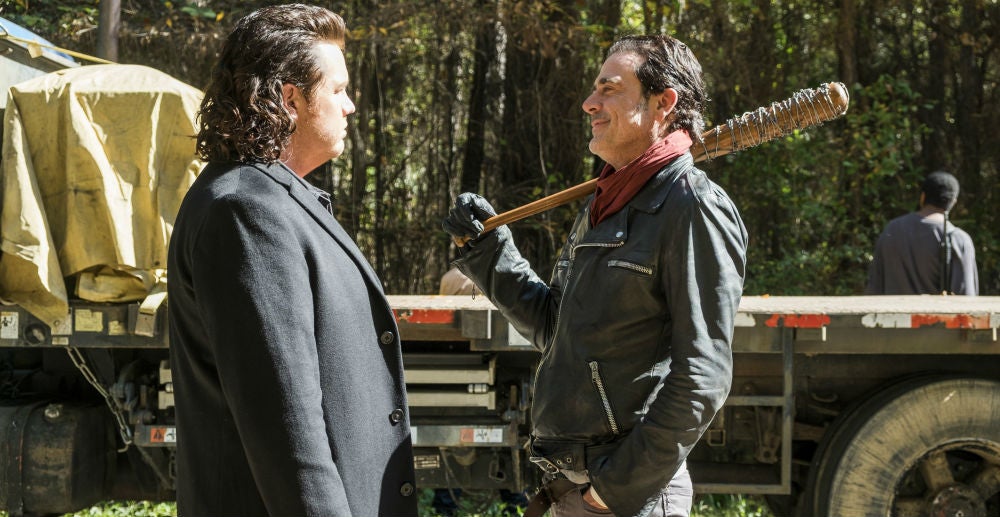 That's kind of the theme of the whole finale, though, right? It told a bridging chapter between what we'd seen and what we expected to see. The war between the Saviors and everyone else is officially here. How that war will be fought is going to play out in season eight. Which I think we all figured, right? There was so much story to be told, there was no way everything was going to wrap up here. As satisfying as it would have been to see Negan get eaten by Ezekial's tiger or have Rick rip his heart out, do you really want The Walking Dead without Negan? No, you don't. Negan makes the show and while I would have loved to see the war start and finish in this season seven finale, the fact that it only briefly started is what's going to bring me back next year.

And that's a wrap on season seven of The Walking Dead. I hope I did Rob justice with these thoughts. I know he was sorry he couldn't be here to wrap up the season with you but a man's gotta take a break sometimes. Just like this show is about to do right now. It will be back in October.