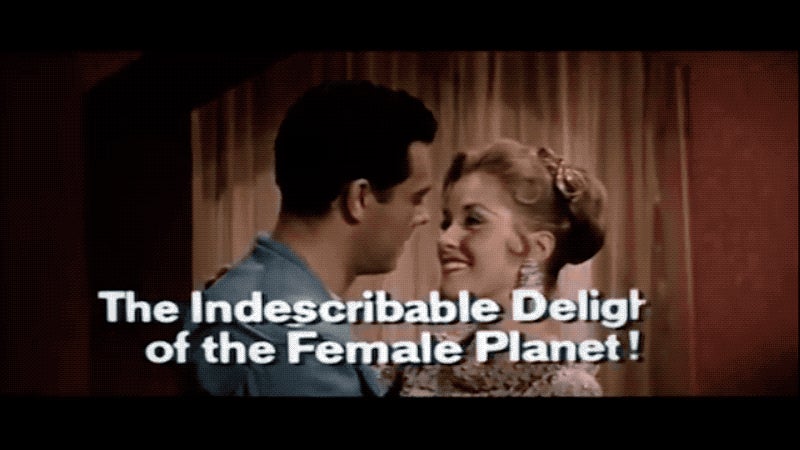 From 1953's Cat-Women of the Moon to Futurama's "Amazon Women in the Mood," there's long been a sub-genre of science fiction about planets full of women. Long touted as examples of female autonomy, most of them wind up being nothing more than male power fantasies, as one video essay shows.

Catherine Stratton and Fandor recently released a video essay called "Lady Lands," all about this bizarre scifi trend from the 1950s and 1960s. Exemplified by classic B-movies like Queen of Outer Space and Planet of the Amazon Women, the movies are typically about one or more men who arrive on a planet solely occupied by women.

It might seem like women are in power, but they're not — their power structure is a glorified holding place for men to take over. These guys are callous, brutish, and sexist, and the women are either immediately transfixed or stubbornly resistant. In the end, the men are rewarded with power and sex, unless they choose to defeat the evil women and leave them to die.

That's not to say all "women planet" storylines are designed as male power fantasies. The aforementioned Futurama episode was a parody of the genre. During Abbott and Costello Go to Mars, a much earlier parody, the pair try to introduce women to "l'art d'aimer," but end up getting kicked off the planet as a result. In addition, there's Paradise Island, the land where Diana and the Amazons thrive. They don't fuck around with menfolk on their shores.

With MST3K coming back in a few weeks, it's a good time to examine these early movies — not just as comedic cannon fodder, but also in how they used straw feminism to embolden men and fetishise women. You can check out the essay below. [Catherine Stratton]