This Art Exhibition Is Made From Bacteria, Live Insects And Human Sweat

Screw Rembrandt, Picasso and all that boring old guy paint-on-a-canvas stuff. The future of art is bacteria, ants and the smell of sweat.

Artist Anicka Yi’s work rejects the traditional art making tools and forces the viewer (and sniffer) to come to terms with some otherwise gross things. She put together her award-winning new exhibit “Life is Cheap” at New York’s Guggenheim Museum with the help of a team of PhD students. But if it makes you retch, that’s your problem. 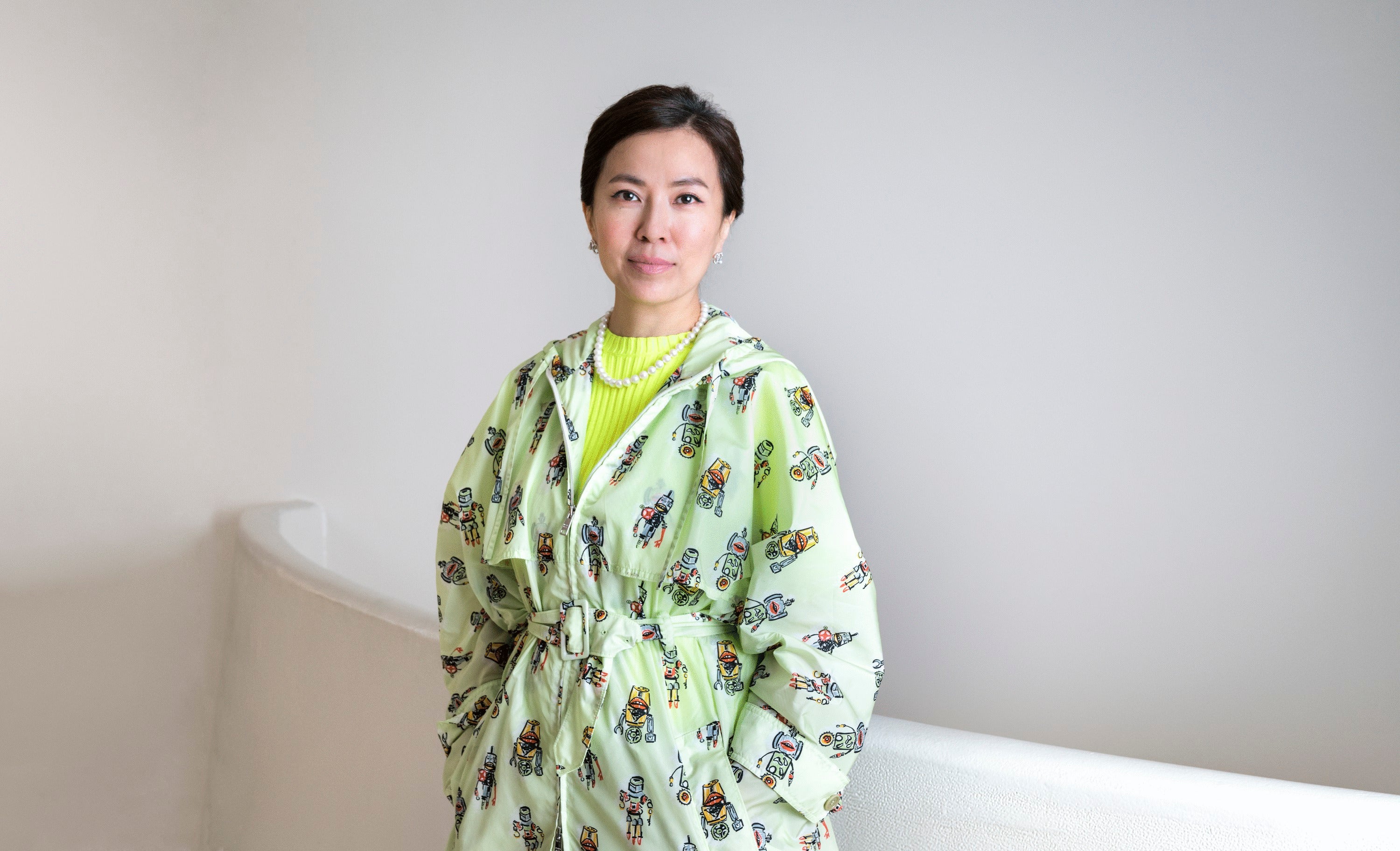 “People complain and they become very upset,” Yi told Gizmodo. “That’s precisely why I make the work that I do. It’s a visceral response that’s not this passive, detached disinterested experience of art.”

Yi’s newest exhibit definitely evokes a visceral response. At the entrance sits Immigrant Caucus, a set of diffusers puffing a perfume made with chemicals from Asian American women and carpenter ants, which opens into a wide exhibition space. On one side, behind glass, is Force Majeure, a white room with a pair of white sculptures and a pair of white floral shadow boxes — but the whole thing is overrun with colourful splotches of purple, red, yellow and green bacteria from the skin of folks living in New York’s Chinatown and Koreatown, grown in culture. 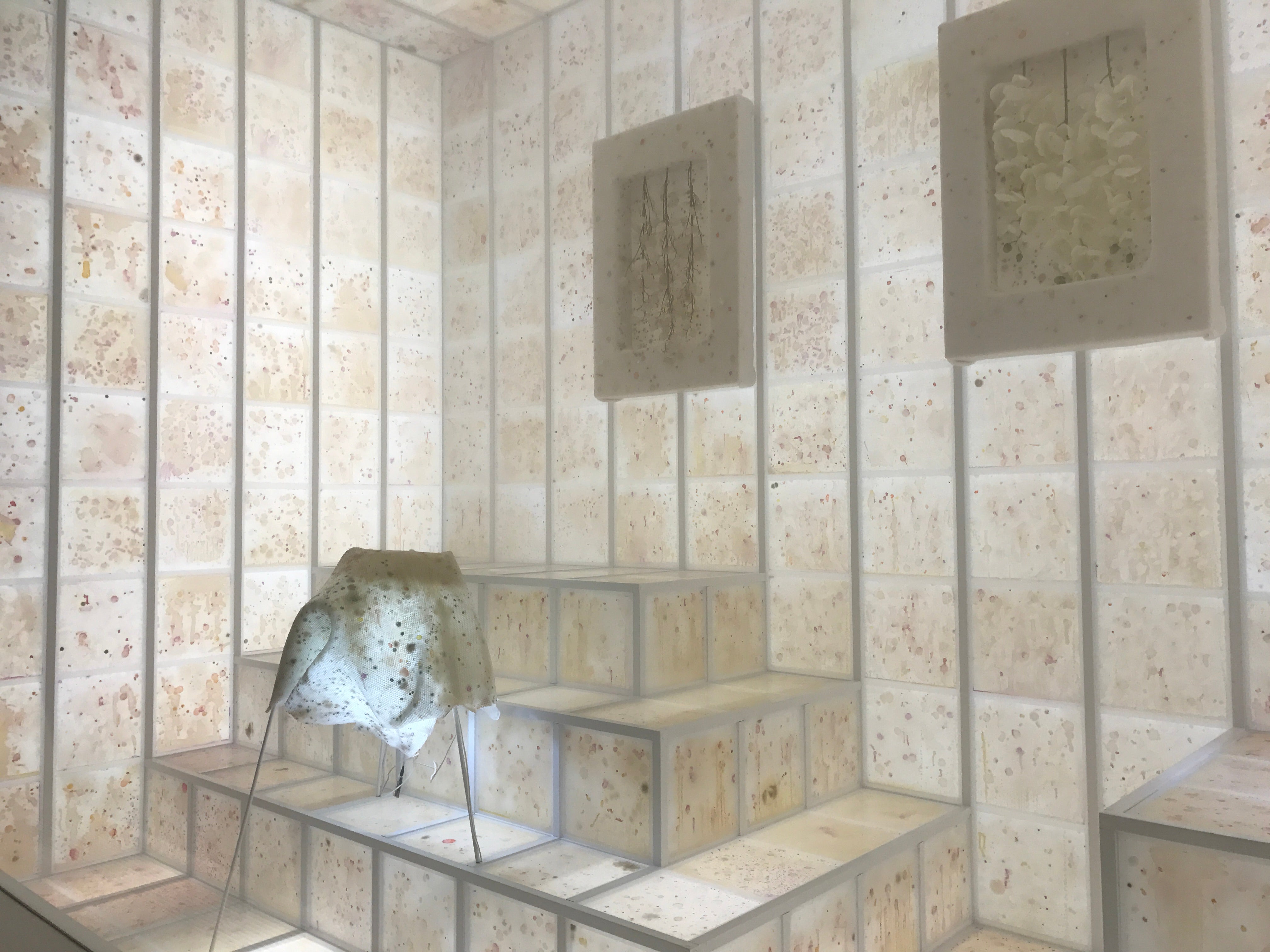 On the other is Lifestyle Wars, a dark, mirrored room with server boxes resting behind a tall mushroom sculpture. Everything is overrun with a glistening, translucent slime. Ants crawl inside an illuminated maze that covers the wall like an integrated circuit. The ants, a smell-guided insect, also receive a dose of the synthetic scent in the room. 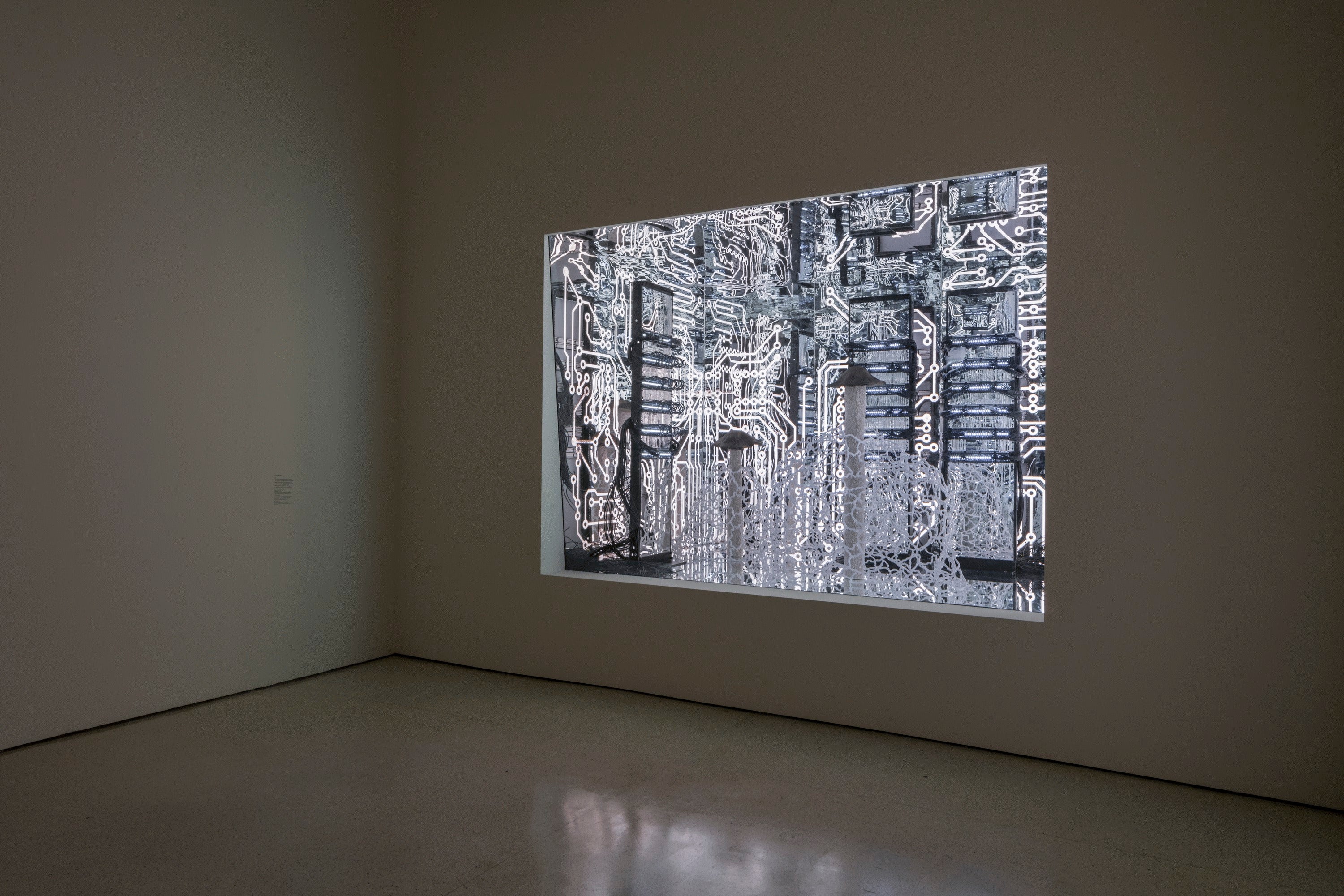 The science, especially growing the bacteria, wasn’t much different from Columbia University PhD students’ day-to-day jobs. “Building the colour palette is classic microbiology: Isolating the strands and figuring out what they grow on well,” said Ross MCBee, PhD candidate in biological sciences at the Virginia Cornish Lab and Harris Wang Labs. But even the kinds of bacteria that grew told a story. “The purple one is awesome — it produced a compound called violacein which is an antifungal,” Frank Cusimano, PhD candidate in Columbia’s Harris Wang lab, told Gizmodo. “It’s cool because it grows at warm temperatures, about 98 degrees [36.6C]. Even though it’s a soil bacteria, we found it on someone in Chinatown. Maybe they have potted plants at their house.”

But those stories only reveal themselves once the bacteria is grown, and culturing bacteria as part of an art exhibit has its challenges. 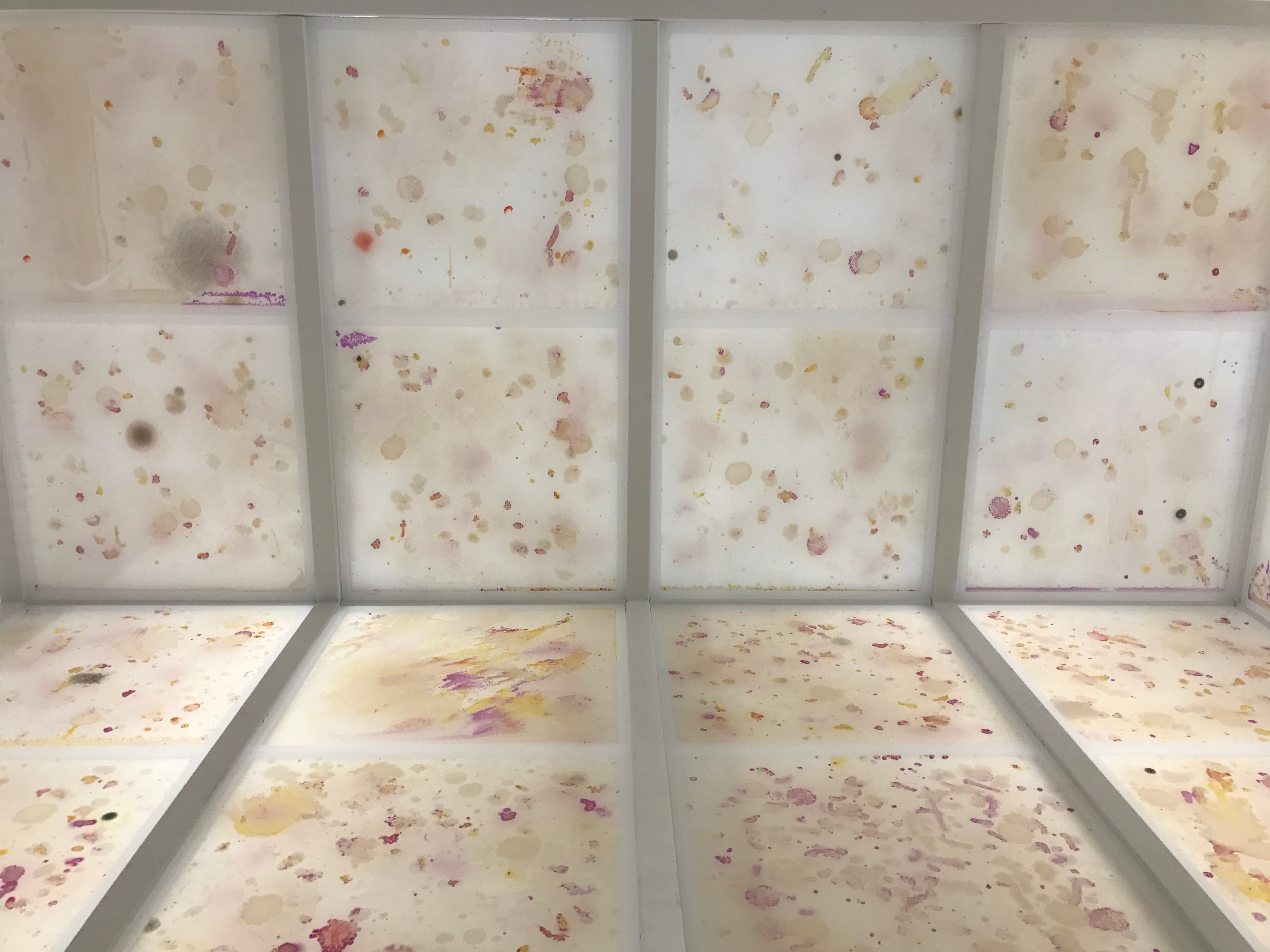 “Making that bacteria biosphere is equivalent to a painter trying to make a painting, but you have to grow your own colours,” said Yi. “They’re seasonal, you don’t know which colour will yield a crop, you really don’t know what’s going to actually render itself visible as a form, a shape, a colour.” Plus, growing that much bacteria is far more than the petri dishes scientists usually culture bacteria in. 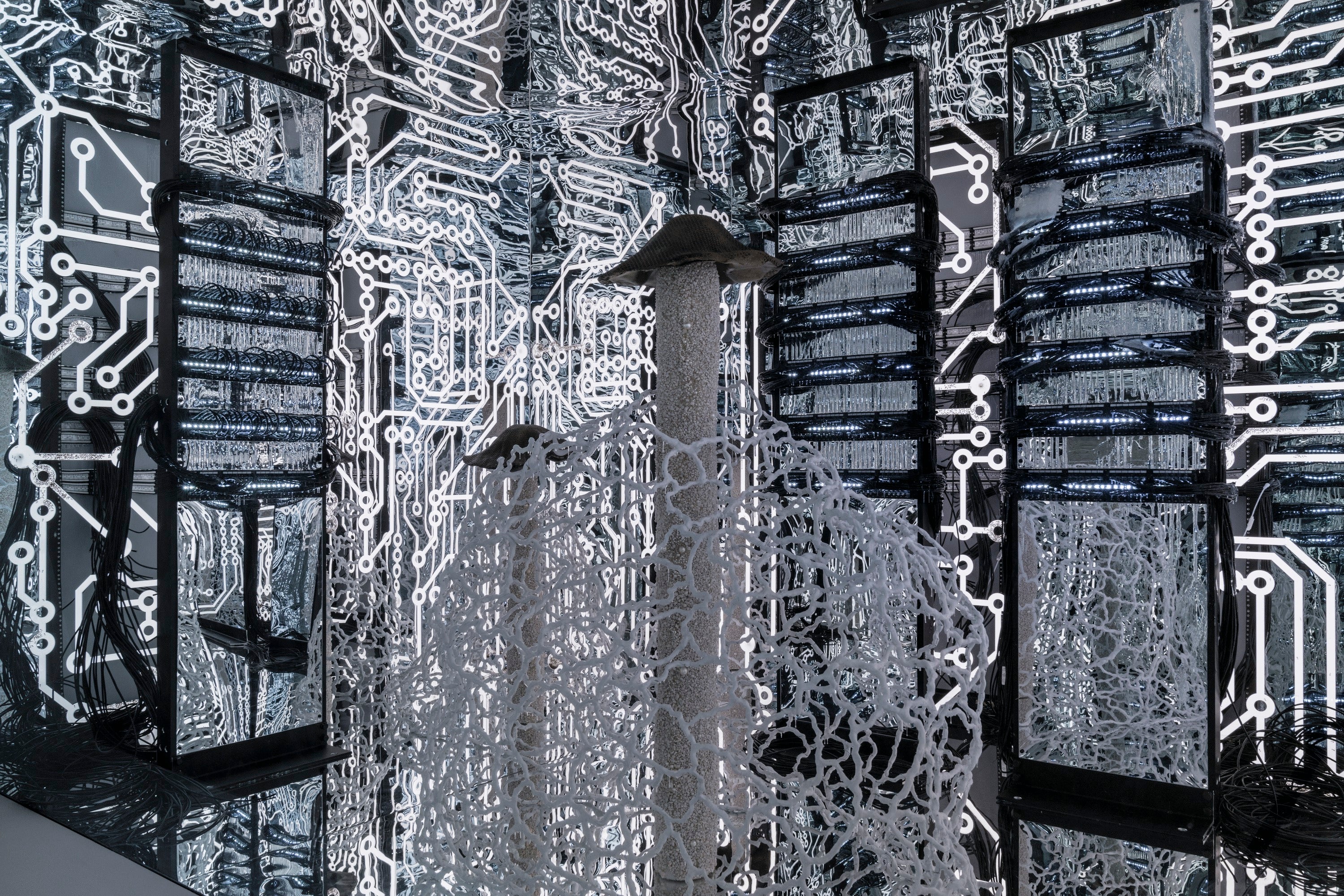 Ultimately the work is supposed to gross you out — or at least let you think about different ways that art can be presented, and furthermore, engage with concepts like race, gender and class.

“If anything I’m just really interested in engaging in the conversation or a conversation around the work,” said Yi. “I welcome it.”