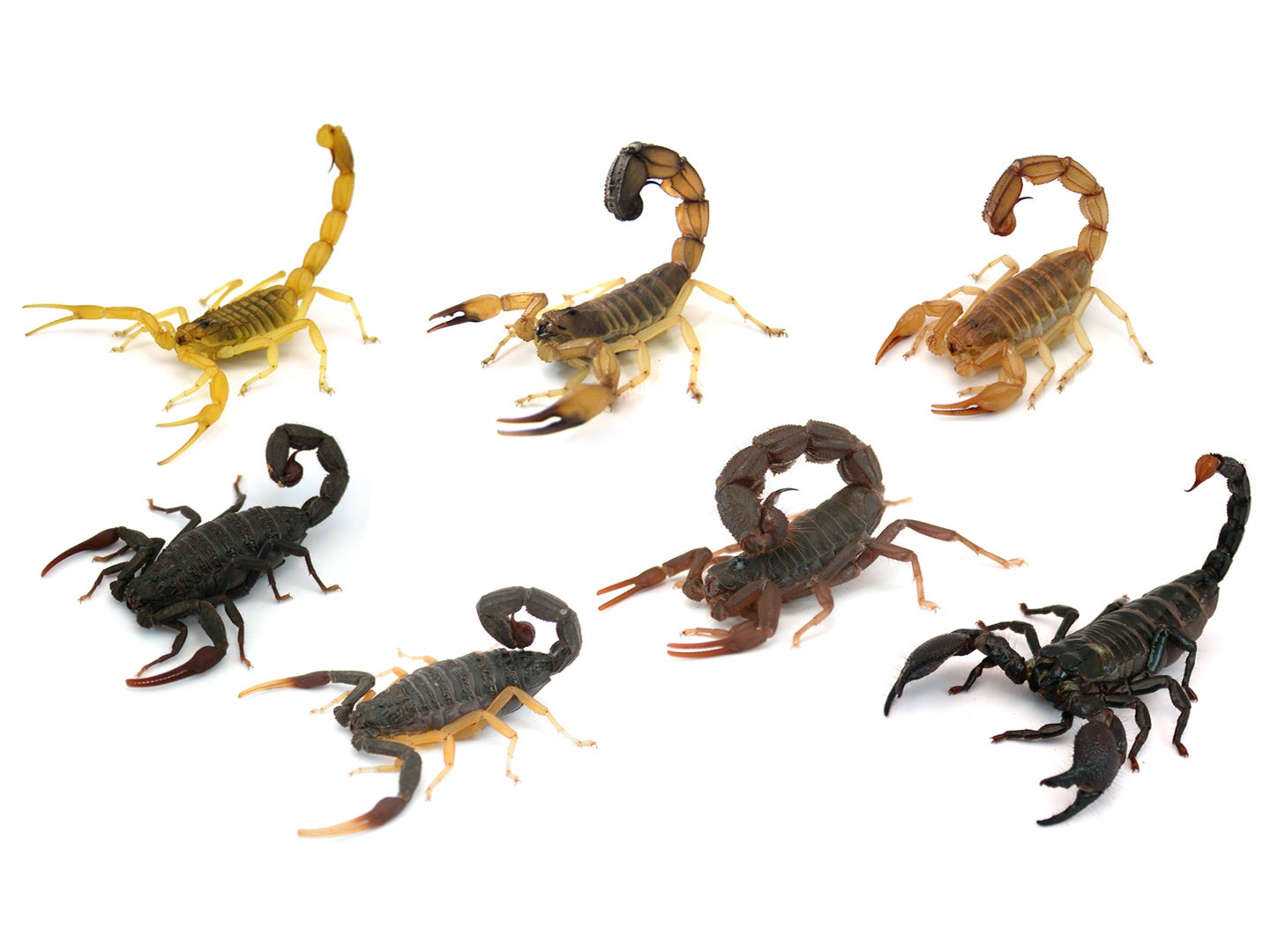 It’s known as the “death stalker” — a 8cm-long predatory arachnid capable of whipping its tail at speeds reaching 130cm/s. Footage shot with high-speed cameras shows how the death stalker and other scorpions use their deadly tails to ward off would-be predators and catch unsuspecting prey.


The death stalker scorpion features a fast and accurate strike, making it one of the most formidable scorpions in the world. (Credit: Arie van der Meijden)

A research team led by evolutionary biologist Arie van der Meijden from the University of Porto in Portugal used high-speed film to analyse the strikes of seven different scorpion species. Of all the scorpions studied, the death stalker took top prize in terms of its lightning-like efficiency, snapping its tail at 4.68km/h, or 130cm/s.

To film the scorpions in action, the scientists built a small platform surrounded by mirrors on all four sides. After placing a scorpion in the rig, and teasing its pincers with a thin piece of wire, the researchers were able to film the strikes from above with a video camera at 500 frames per second. By tracking the scorpion’s movements from several different viewpoints, the strike trajectory could be reconstructed in 3D.

Armed with the slow-motion video, the researchers were able to track the trajectory, speed and acceleration of the various scorpion strikes, and how these factors related to the shape of the scorpion itself. As the researchers describe in their study, which appears in the science journal Functional Ecology, each species of scorpion has a distinctive defensive strike. Each species differs in trajectory shape, speed, path length and duration between strikes. That said, the scorpions tended to utilise one of two strike modes: Open and closed strikes. Of these, open strikes were the fastest and most accurate.

Open strikes are effective in that they traverse a large portion of space, increasing the scorpion’s chances of hitting and penetrating a target. Overall, open strikes were the fastest, resulting in increased momentum of the tail. Closed strikes, on the other hand, traverse a smaller space, but with this technique, scorpions can quickly return their stinger to the attack position and ready themselves for the next attack.

Watching the slow motion video, the researchers noticed how the death stalker snapped its venomous stinger over its head, bringing it straight down on the desired target before it whipped back up into the attack position. This 8cm-long scorpion lives in dry regions of North Africa and the Middle East. Its venom is highly dangerous, and potentially lethal to children.

In other tests, the emperor scorpion — the world’s largest scorpion — exhibited a similar open strike. But other scorpions, like the black spitting scorpion and various members of the hottentotta family of scorpions, attacked with a more circular motion, forming an “O” in the air. And when comparing a fat-tailed scorpion with a thin-tailed scorpion, the scorpion with the thicker tail was faster. At the same time, scorpions with similar tails did not differ in their strikes.

Looking ahead to future research, the scientists are hoping to understand why scorpions use such varied striking strategies. It may be related to the kind of predators they need to defend themselves again, or the fact that some scorpions rely more on their pincers to ward off a threat. Scorpions typically use their venomous tails to fend of bats, snakes, lizards and other predators, but the stingers can also be used to catch prey.