Foxtel’s Streaming Service Binge: Everything You Need To Know 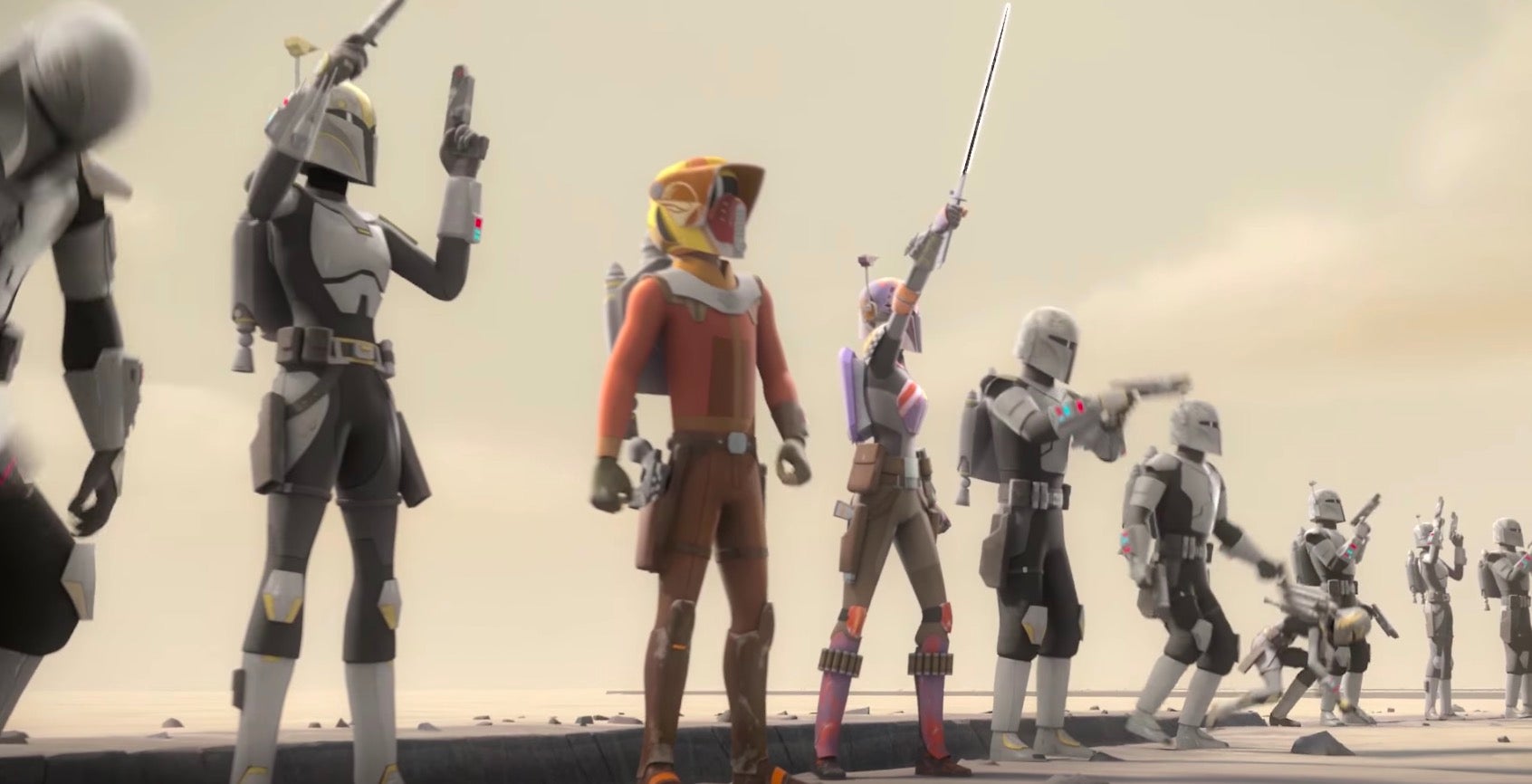 The fourth and final season of Star Wars Rebels won’t debut until later this year, but the first part of the season premiere screened at Star Wars Celebration.

Clan Wren is about to go off on Star Wars Rebels. Image: Disney XD

Below, we’ll tell you all about the important beats of the episode. But, since it’s so far away, we will give it a nice big spoiler warning.

The episode that screened in Orlando was called the Heroes of Mandalore Part 1 and is about Sabine leading Clan Wren, including Ezra and Kanan, in a raid to liberate her father from Imperial imprisonment on Mandalore.

Things start with a massive action scene in which clan Wren attacks an Imperial outpost they believe holds Sabine’s father. Ezra isn’t much help, however, because he can’t get control of the Mandalorian jetpack he’s using. After winning, however, they realise that the information about Sabine’s father was false in order to trap them. The evil Gar Saxon then attacks the clan but, a few mysterious Mandalorians come to Sabine’s rescue.

It’s Bo-Katan Kryze, the sister of former Mandalorian leader Satine, making her triumphant return from Clone Wars. She explains the trap to Sabine and tells her the real plan. Saxon plans to execute her father in the Mandalorian capital.

Sabine, Ezra and their friends then craft a plan. It involves creating a distraction for a convoy carrying her father and breaking him out. The plan devolves into a huge action scene in the mould of Indiana Jones and the Last Crusade, with the Jeeps and tanks in the desert. It’s incredibly exciting and fun with lots of ups and downs.

It turns out Saxon has a trick up his sleeve. Though Sabine has broken her father out successfully, Saxon has a special weapon that he’s going to deploy for a few of the survivors of the battle. We don’t see it, we only hear it. And when we see where it was set off, everyone has been evaporated. Everyone, including Sabine’s mother and brother, are dead.

We then find out that this weapon that Saxon used was developed by none other than…Sabine Wren. Yes, that’s right. Sabine created the weapon that killed her mother and brother. It’s the reason why she was originally exiled from her people in the first place.

The episode ends with an overhead shot of Sabine in the ashes of her family’s bodies, vaguely reminiscent of Luke finding his Aunt and Uncle in A New Hope.

It’s a fun, cool episode that turns super dark on a dime. A great cliffhanger that we’ll find out the answer to in a few months when Star Wars Rebels starts its fourth and final season.