Scientists Found a Good Use for Surplus Sperm 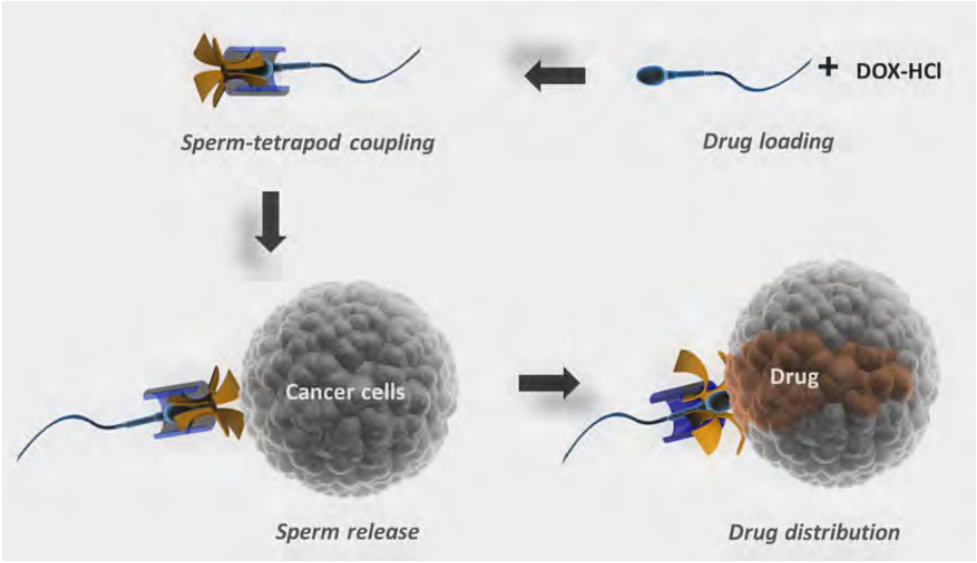 A team of German scientists were wondering how to deliver medications into the female reproductive tract and realised, hey, why come up with something new? The human body already produces its own little machines perfectly suited to deliver their goods to that same spot. So, why not tame our little sex swimmers as a means of treating disease — by strapping little hats onto them?

There are a lot of challenges to properly treating cancers or other diseases. Delivery systems need to actually target specific locations, control how the drugs are released, and kill only the targets they’re aiming for, be they pathogens or cancer cells. Scientists have already been looking at some other cells — white blood cells for cancer treatments or red blood cells for delivering drugs in the blood, for example, according to a new paper published last month on the arXiv. Since they’re really good at getting around the female reproductive tract, the researchers decided to try sperm cells — or as the paper’s authors hilariously call them, “sperms”. 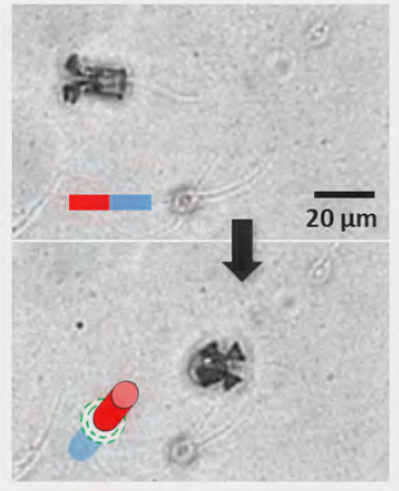 While this isn’t the first time the researchers have tried to strap a motor to a sperm cell (their last attempt is giffed above), they seem to be the only ones I could find doing this sort of work, and this motor is all new.

In order to test it out, the researchers created five micrometre wide four-pronged hats laced with iron that bull sperm cells swim into, and then push around with their long tails. When the sperm-and-hat setup hits a cluster of cancer cells, the hat opens up like a bloomin’ onion, the sperm’s head pushes through, and it delivers whatever medication it was carrying. The metal in the microstructure allowed the researchers to guide the whole thing with magnets.

The team did some tests and were able to move “the sperms” around tracks. They even loaded the little dudes with a chemotherapy medication Doxorubicin, a drug that has a strong effect on cancer cells but almost none on sperm cells. When the drug-soaked sperm attacked some test cancer cells with the new sperm machines, the drug started kicking in after two days.

The red dotted line is the hat, the blue arrow is the sperm attacking HeLa cells (Image: Xu et al)

As cool as this sounds, there are obviously caveats — these tests happened in experimental environments, not in bodies. The silly hats slowed the sperms down around 43 per cent, and they still only had to travel a few centimetres. There are plenty of other questions too, like how to control the amount of medication and how to ensure the patient doesn’t get pregnant, as well as ethical issues, like how doctors will get the sperm, according to the story published in MIT Tech Review.

And as a note, the paper was published on arXiv which means other scientists haven’t had a chance to peer review it yet.

But even still, I’m cheering for these sperms. Go, sperms, go!