Google’s AlphaGo Is About To Face Its Toughest Competition Yet 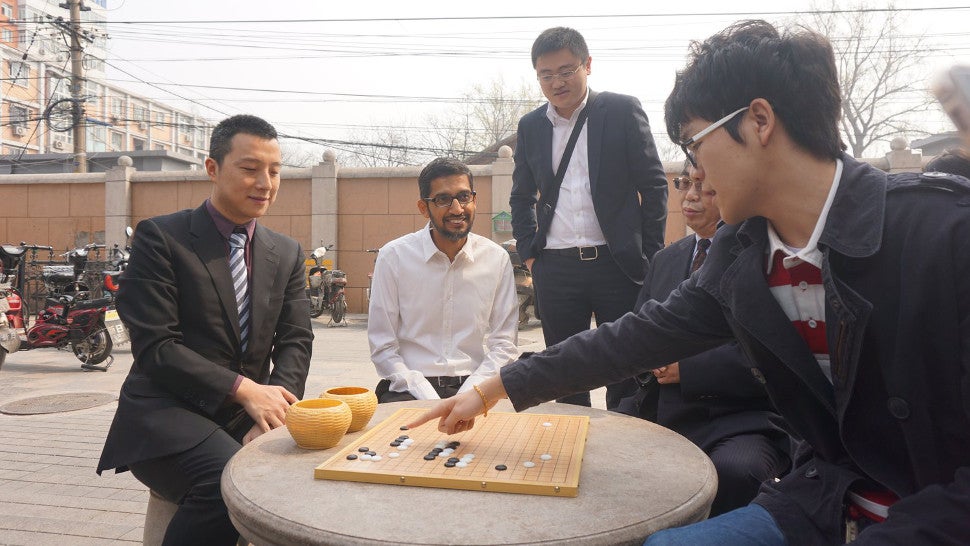 Google’s AlphaGo made history last year by becoming the first machine to defeat a top-ranked human Go player. It was an important AI milestone, but AlphaGo isn’t getting off that easily. Next month, the expert system will partake in a five-day tournament that will pit it against China’s top Go players — including Ke Jie, the world’s best player. Humans, the time for our redemption is at hand!

This battle between man and machine is called the Future of Go Summit, and it’s taking place in Wuzhen, China, from 23 to 27 May 2017. The event is a collaboration between Google-owned Deepmind, China Go Association and the Chinese government. In addition to featuring an innovative mix of competitive formats, the summit will involve talks and panel discussions on AlphaGo and the future of AI in general.

In the year since AlphaGo defeated world-champion Go player Lee Sedol, the practitioners of this 3000-year-old board game have had ample time for reflection. But instead of wallowing in despair, or declaring an end to meaningful gameplay, its players have been actively working to understand what happened during the tournament and how a machine accomplished something experts said could never be done. Remarkably, the game has flourished since the March 2016 tournament between AlphaGo and Sedol, sparking innovations in gameplay that are surprising the professionals.

“I believe players more or less have all been affected by Professor Alpha,” said professional Go player Zhou Ruiyang in a Deepmind blog post. “AlphaGo’s play makes us feel more free and no move is impossible to play anymore. Now everyone is trying to play in a style that hasn’t been tried before.”

The emergence of AlphaGo shows there’s still a lot to learn about this ancient game, hence the upcoming Go nerdfest. Excitingly, the Future of Go Summit will include variety of formats involving AlphaGo and top Chinese players. As noted on the Deepmind website, those formats include:

Pair Go: A game where one Chinese pro will play against another…except they will both have their own AlphaGo teammate, alternating moves, to take the concept of ‘learning together’ quite literally.

Team Go: A game between AlphaGo and a five-player team consisting of China’s top pro players, working together to test AlphaGo’s creativity and adaptability to their combined style.

Ke Jie vs AlphaGo: Of course, the centrepiece of the event will be a classic 1:1 match of three games between AlphaGo and the world’s number one player, Ke Jie, to push AlphaGo to… its limits.

The three-game match between world champ Ke Jie and AlphaGo will be especially epic. This much anticipated match almost didn’t happen, as Jie was worried that the machine would copy his playing strategy. Jie apparently changed his mind after Sedol’s defeat last year. As to who will win, that’s impossible to predict; Jie is the world champ, and Lee Sedol showed that AlphaGo is capable of losing (even if it was just one game). At the same time, AlphaGo is steadily improving, getting better with each game it plays. The “Team Go” match, in which five human pros will put their heads together against AlphaGo, should also be pretty interesting.

As for the “Pair Go” portion, that’s a bit meh. The organisers missed an opportunity to set up some “Centaur Go” matches similar to Centaur Chess, in which humans and machines team up together. So instead of alternating moves, each team would consist of a human player and an AlphaGo, where the human could use the AI as a decision-making tool. This is actually one of the more interesting aspects of AI research these days; alone, humans and AI are limited, but together, they’re capable of some extraordinary cognitive feats.

In addition to these games, the Summit will also feature a forum on the “Future of AI”, bringing together some of China’s leading experts in the field. Panellists will discuss how AlphaGo managed to get so good at Go, and how this technology could be leveraged elsewhere.