Comcast Prepares to Screw Over Millions With Data Caps in 2021

Meet the Honda Electro Gyro-cator. It’s widely considered to be the world’s first automotive navigation system, developed 36 years ago. And it looked like it should be on the wrist of a wasteland warrior wearing power armour.

The Electro Gyro-cator didn’t use GPS, if we’re splitting hairs. Its 1981 launch only closely followed the 1978 creation of the Global Positioning System, and it didn’t have any kind of self-contained radio communication technology. Instead, it used a form of inertial navigation, with an internal gyroscope and odometer that tracked the direction and speed a car was travelling to constantly update its position on the (laminated, paper) map that it magnified on its cathode ray tube display.

And it came with a book of maps of the region it was sold within. This is genuinely something I’d expect to find in Fallout, not in the dashboard of an ’80s Honda Legend. It’s gorgeous. Honda says it, in part, “triggered the global popularization of map-based automotive navigation systems” — I just wish they all looked this good. 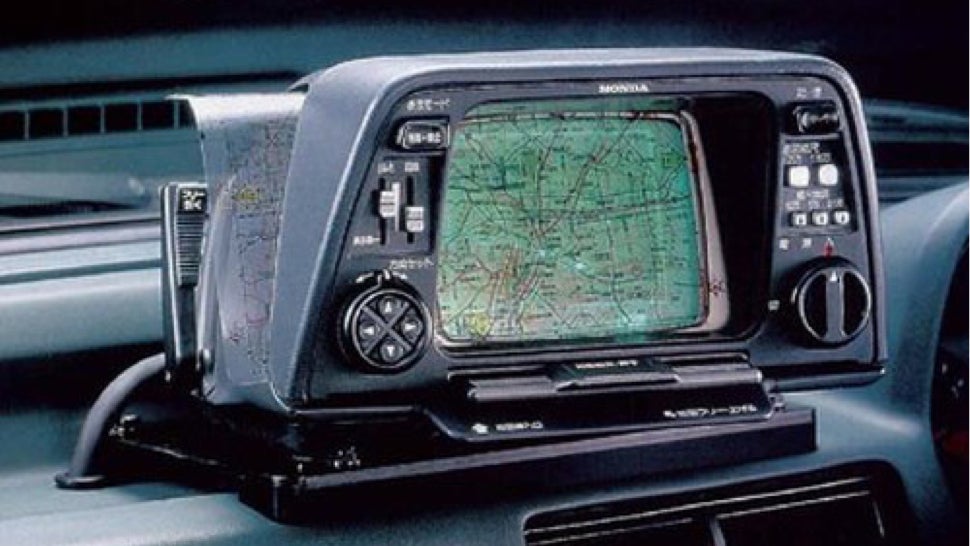 The First Commercially Available Car Navigation System Was From 1981

The Global Positioning System constellation of satellites has been helping lost travellers find their way for a while now, but they only really started showing up in cars in the mid- to late- 1990s, and in big numbers even later than that. But the first automotive navigation system was offered over thirty years ago.

The Gyro-cator was today honoured with an IEEE Milestone award from the worldwide Institute of Electrical and Electronics Engineers as a significant innovation “in the areas of electrical, electronics, information and communications technologies”, an award reserved for tech over 25 years old that has contributed to the advancement of society. Here’s Honda’s explanation of how the Electro Gyrocator operates:

The combination of this direction sensor, driving distance sensor, microcomputer and other technologies enabled it to detect direction and the distance of the movement, which were used to calculate the current position of the vehicle. By indicating the current location, direction and driving trajectory of the vehicle on a cathode-ray tube (CRT) display where the user placed the map film, it was made easier for the driver to select which path to take.

And here it is in action, in all its retro-glory: