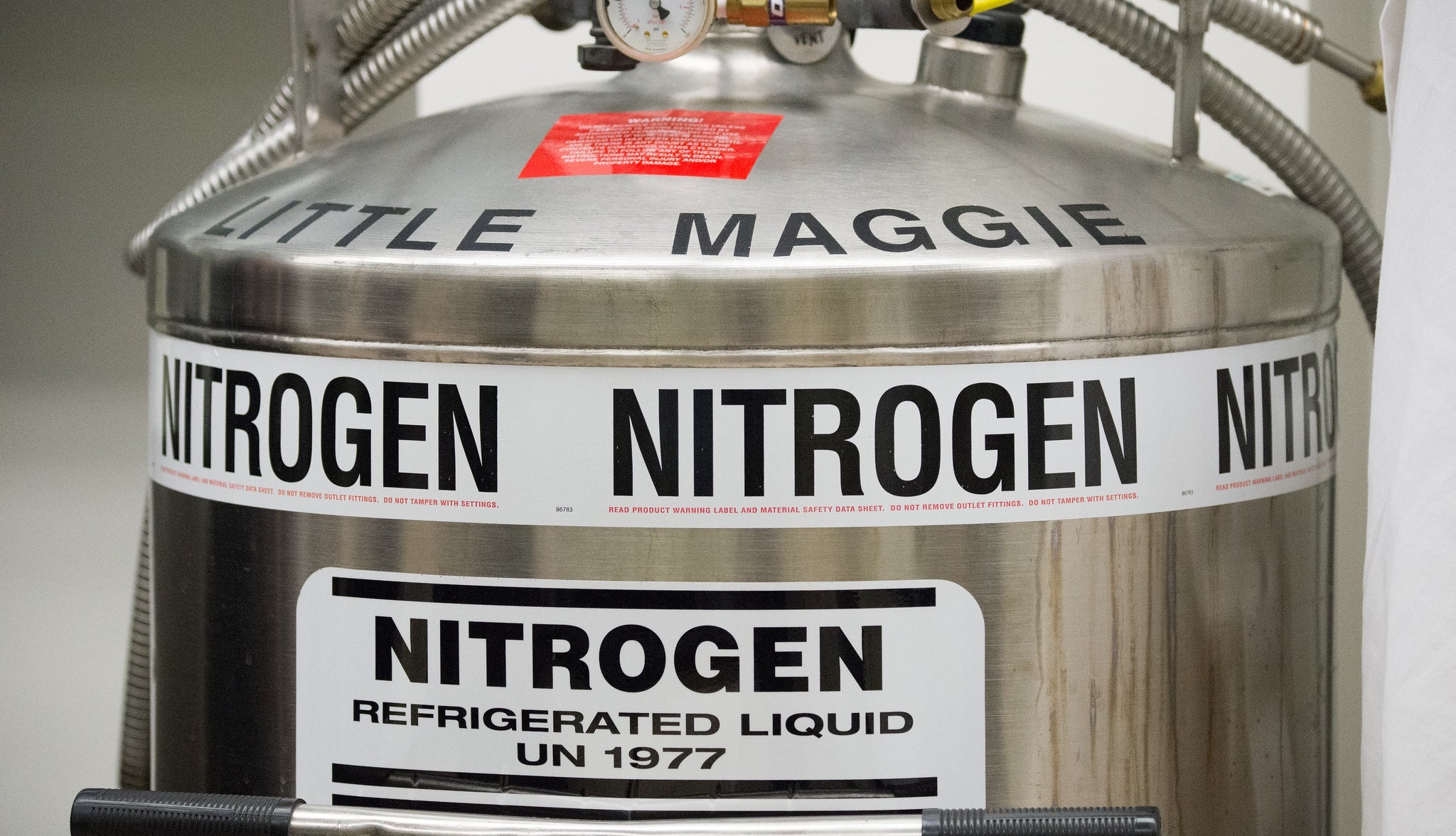 Transplants aren’t as easy as heading to the organ bank and using your organ card to withdraw an organ from the organ ATM. It’s more like an economy where every time you needed gold, you had to wait for someone to donate or bequeath it to you. Today, the line for gold is around 1600 people long in Australia.

That’s because fresh organs only have a few hours before the lack of oxygen begins damaging the tissue — many organs are discarded just waiting to find a matching donor. Why not freeze the organs, you might ask? Well, scientists can freeze them, sure, but thawing without causing damage has proven nearly impossible. Now, a team of American researchers think they have found a way to safely warm those preserved organs, or at least, little pieces of them. However, an organ bank system is probably quite a few years off.

The “cryopreservation” process is actually called vitrification — the preservers prevent tissues and organs from forming damaging ice crystals by using a special solution to keep them in a gel-like state at temperatures around -160C. When warming time comes around, if the tissues thaw too slowly, they will form ice crystals anyway, and if they thaw too unevenly, they could crack. “So, what’s exciting about this paper is that the team developed a method of heating that was rapid and uniform throughout the cryopreserved sample,” said the research team’s lead, University of Minnesota engineering professor John Bischof, in a press conference.

The so-called “nanowarming” method begins by covering the organ in specially engineered, 50-nanometre wonderballs, made of iron oxide coated with silica, a polymer and a nasty little chemical called trimethoxysilane (the coating helps keep the iron oxide balls dispersed in a solution). Surrounding the organ sample is an electric current-carrying coil that generates a magnetic field. Switching the current back and forth makes the particles jitter as the magnetic field alternates, too, warming the sample evenly. 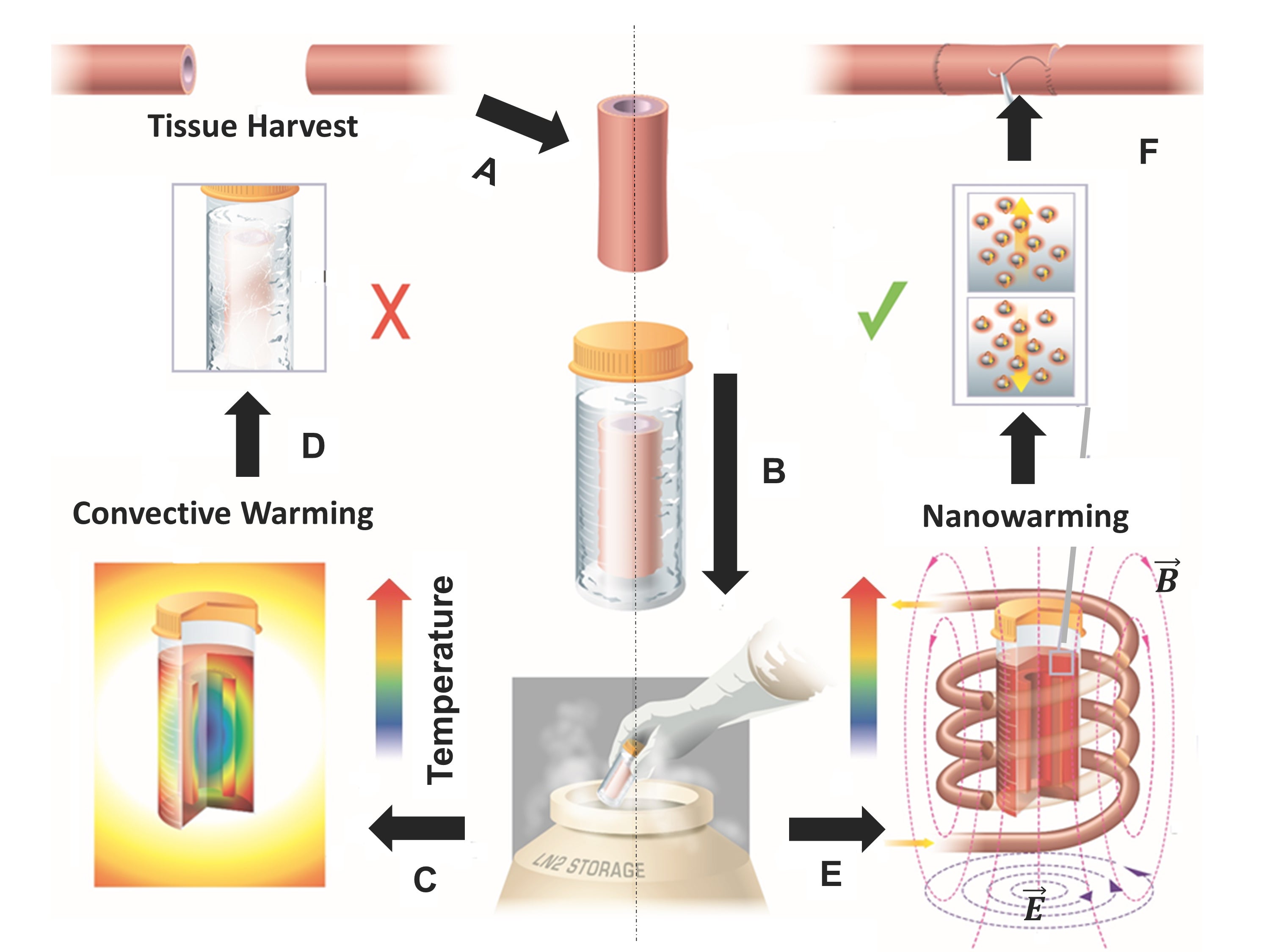 The researchers tested their method on some pig parts, and it worked. “The crystallised samples were barely alive after the slow re-warming,” said Zhe Gao, a University of Minnesota postdoctoral student, during the press conference. But “in a small system nanowarming could recover the viability and functionality of the porcine carotid arteries”, or little piggy blood tubes. The researchers published their results in the journal Science Translational Medicine today.

Small is a key word — the tissue samples were in one, 50 and 80mL vials, equalling to a drop, a little more than a shot glass and a double shot worth of organ. Those vials are big enough for a rabbit kidney maybe, but our big ol’ kidneys, lungs and hearts probably need at least the whole bottle if we’re planning a human organ party over here.

Bigger containers could have issues distributing the heat evenly throughout the organ. Certain organs might be easier than others, though. Hearts, for example, have big chambers that could help disperse the nanoparticles more evenly and allow for a more uniform thaw, said Bischof.

Don’t get your hopes up on cryonics (cryopreserving your whole body) or bringing Ted Williams back from his icy, decapitated stasis. Reviving cryopreserved organs is a decade away, at least, said Kelvin Brockbank, chief executive officer of Tissue Testing Technologies, LLC, on the press conference call. There’s a lot of work left before we get there, including scaling up, optimising the nanoparticle distribution and figuring out how to wash all those nanoparticles out.

Cryopreserving people is also not the goal of this research. “While it’s attractive to think that maybe one day we’ll be able to freeze down and bring back whole people or bodies, or let’s say their heads,” said Bischof “We are so far away from that in terms of the complexity of much of those systems.” Brockbank didn’t think we’d see reviving full-bodies in the next 100 years.

“Cryobiology and cryonics don’t really mix,” said Bischof. “In cryobiology, we do try to stay science-based.”