Mystery Science Theater 3000 is almost back! (Oh man, saying that still gives me shivers.) It’s been a long time coming, but the reboot is finally set to debut on Netflix on April 14. And while the first season’s already in the can, we’ve got a few suggestions for what Jonah Ray, Tom Servo, and Crow T. Robot should riff next.

MST3K riffed a hell of a lot of movies back in its prime, airing almost 200 episodes and a movie, before getting canceled in 1999. Still, there are tons of B-movies they didn’t get to while they were on the air — not to mention all the shitcrapthat’s come out since then. I actually started this list with about 30 different movies, and paring it down was nigh impossible. 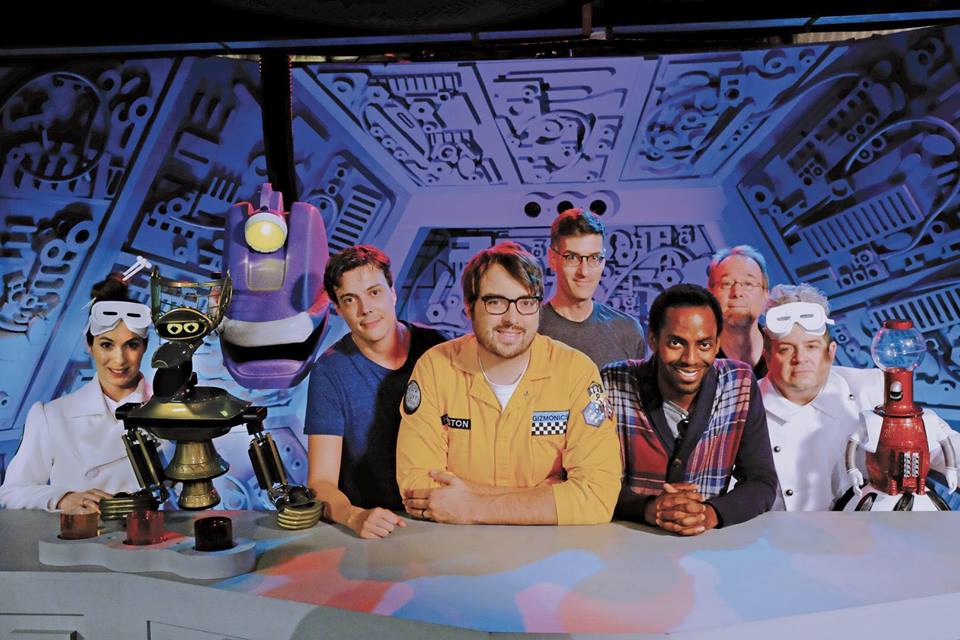 The New Mystery Science Theatre 3000 Has A Premiere Date, A Cast Photo, And My Heart

In the not-too-distant future -- not next Sunday, but a bit under two months from now -- the Satellite of Love will grace our skies once more as Netflix has announced the release date of the show's revival. Friday, April 14. And from this first photo of the new cast, I couldn't be more optimistic.

For the sake of not driving myself insane with an overabundance of choices, I chose to omit mockbusters and obvious spoofs, like Syfy’s Sharknado and the Asylum “classic” Transmorphers, as well as movies that were bad but still managed to have some redeeming qualities, like Skyline and Iron Sky. Yes, I’m aware that some of the picks have been done on Rifftrax, but they still deserve the Mystery Science Theatre treatment. So here you go, a few popular picks (and some personal wishes) for the next season of MST3K.

And… I’ve immediately infuriated all the hardcore MST3K fans! Technically this cult classic is part of the MST3K canon. It was the subject of creator Joel Hodgson’s unaired pilot that was pitched to local Minnesota TV station KTMA back in the day. But it was never turned into a full episode, and it’s a damn shame. It’s all about a group of astronauts who fight against one-eyed, tentacled monsters with the ability to shoot out bolts of electricity. In short, it was made for MST3K, and it deserves to get a full riff.

This horror campfest is about a group of Satanists in the American rural landscape who can melt their victims with their evil demonic powers. It’s got goat people, Puritans trapping in eternal torment, and shirtless William Shatner. In other words, pure gold.

There’s a reason there’s an entire documentary dedicated to how fucked up this movie was. The H.G. Wells story was drawn and quartered and left on a stick for the crows, partially thanks to Marlon Brando’s on-set insanity and Val Kilmer’s apparent refusal to put down the bong. The result is a confusing mess of gene splicing, Brando-worshipping animal hybrids, and long shots of men screaming in the rain. Fairuza Balk is half-cat.

It’s a bird… it’s a plane… oh wait shit it’s actually a giant bird. FROM SPACE! The Giant Claw is all about a weird vulture-looking monstrosity that invades Earth and causes panic everywhere it goes. Plus, it’s got a force field that renders all weapons helpless. What will our heroes do? Probably laugh themselves to death over what is arguably the crappiest giant monster in cinematic history.

Hey guys, remember how E.T. was, like, super popular? Well, McDonald’s is proud to present Mac and Me (seriously, Ronald McDonald introduces the trailer)! But Mac is totally his own thing. Instead of an extra-terrestrial who’s separated from his family, he’s a “Mysterious Alien Creature” who’s separated from his family. And he makes friends with a boy, only this kid doesn’t fly a bike… because he’s in a wheelchair. Also, he gets murdered.

I’ve tried to avoid films that were riffed to death, but rules don’t apply when it comes to Birdemic. This is scifi’s The Room, when a director’s ego and desire to change the world meets a total lack of basic filmmaking skills. There are global warming-driven killer birds, million-dollar business deals, and lots of fishing trips… such as seals. Look, it was either this or The Amazing Bulk, and even I wouldn’t want Jonah and the crew to suffer that much.

Cowboys vs. Aliens isn’t the first time the Wild West has bumped uglies with science fiction. In this 1960s camp-fest, Frankenstein’s granddaughter (yeah I know, the title is misleading) turns Jesse James’ loyal sidekick into an abomination as part of her crazy experiments. There’s seduction, gun fights, and lots of child murder. The last part is a little awkward.

Sexy evil cat-women who want to dominate Earth by killing all the dudes and mind-controlling the ladies? Hell, sign me up.

This scifi thriller is kind of what happens when you combine The Terminator with Jupiter Ascending, with a touch of Hell Comes To Frogtown for the icky rapey vibes. Future Minnesota governor Jesse Ventura stars as an intergalactic space cop who’s chasing down a rogue alien named Secundus who wants to impregnate a woman with a super-baby that could destroy the universe. Of course, the pregnancy is done via belly touch, but still, gross.

A Rifftrax favourite, this is one of the most insane films in existence, and I hope to death that MST3K continues its holiday movie tradition by attempting to tackle this sucker. That would make it, simply, the best Christmas-in-April ever.

So there you go, 10 picks for what could be some amazing MST3K episodes this season, or (Pearl willing) even more seasons in the not-too-distant future. But again, there are so many other wonderfully terrible movies for Jonah and the bots to choose from. List your suggestions in the comments!