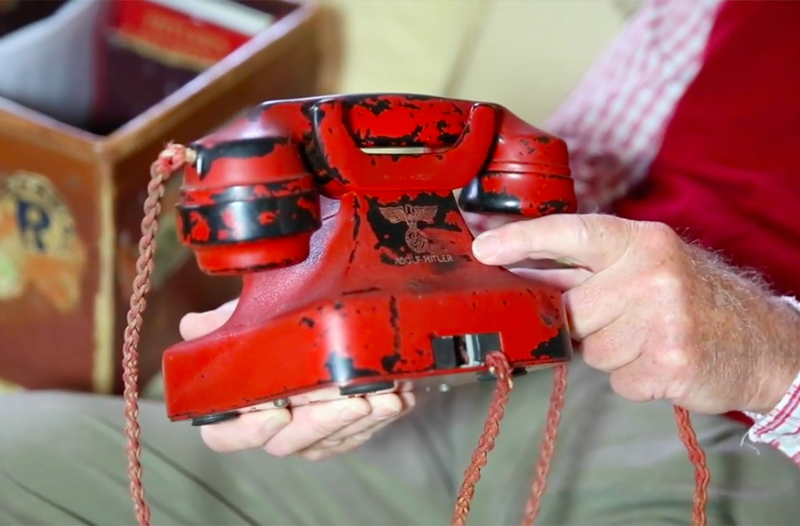 If you have hundreds of thousands of dollars and are extremely creepy, you can now buy a one-of-a-kind piece of history: Adolf Hitler’s personal telephone.

The phone will be sold by Alexander Historical Auctions in Maryland, and is expected to sell for between $US200,000 ($264,577) and $US300,000 ($396,866). It was taken from Hitler’s bunker shortly after his death by Brigadier Sir Ralph Rayner, who died in 1977; his son Ranulf inherited the phone. According to the auction listing, Rayner was given the phone by Russian officers:

Very likely the first non-Soviet victor to enter the city, Rayner went to the Chancellery where Russian officers offered him a tour. On entering Hitler’s private quarters, Rayner was first offered Eva Braun’s telephone, but politely declined claiming that his favourite colour was red. His Russian hosts were pleased to hand him a red telephone – the telephone offered here.

The listing goes on to note the phone’s uniquely horrific history:

It would be impossible to find a more impactful relic than the primary tool used by the most evil man in history to annihilate countless innocents, lay waste to hundreds of thousands of square miles of land, and in the end, destroy his own country and people…with effects that still menacingly reverberate today.

The auction house also posted a YouTube interview with the phone’s owner, where he notes that Hitler used the phone “as a mobile phone”, taking it with him wherever he went:

Bill Panagopulos, owner of Alexander Historical Auctions, says they tend not to attract neo-Nazis trying to buy Nazi memorabilia, because “they’re simply too uneducated to understand it”, and they tend to want “their own symbols” rather than historical Nazi gear. In fact, he says a large percentage of their customers are Jewish, “because they understand the importance of preserving” such artefacts.

That’s encouraging to hear, because the auction house is selling a number of other disturbing items: Metal tattooing stamps, the kind that were used to tattoo inmates at Auschwitz (though Panagopulos says these weren’t necessarily actually used at the camp), and several Hitler Youth items, including slides from an antisemitic slideshow and a Hitler Youth knife.

The same auction house once sold Donald Trump’s “Executive Slim Line” bible, which was inscribed to his second wife Marla Maples in what appears to be Trump’s signature black Sharpie: “Sept. 30 / 91 Marla – Mrs. [Christine C.] DeMoss sent this to me – She and Billy Graham are wonderful people who you made a great impression on. Read every word! Love Donald.”

According to Panagopulos, Rayner is selling the phone because the insurance costs were high, and hopes a museum will purchase it.