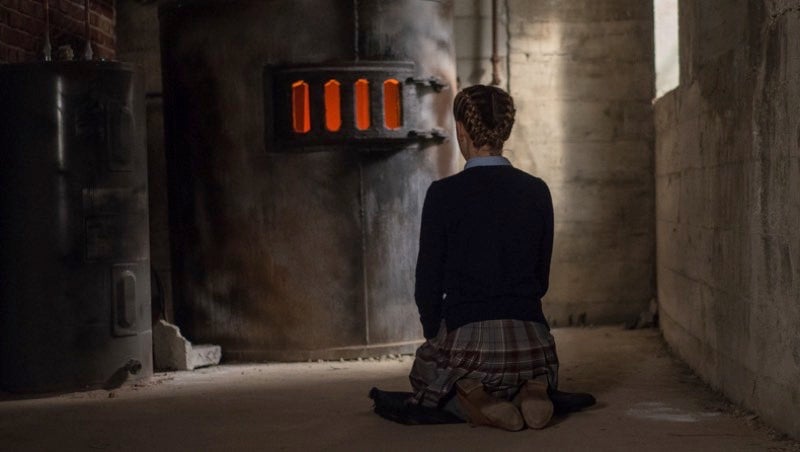 Imagine if you were stuck at your bleak boarding school over winter break — a place which apparently has a dark, secret past and maybe some Overlook Hotel tendencies. Stack The Blackcoat’s Daughter next to Phenomena, The Woods, and Picnic at Hanging Rock, and you’ve got yourself a dreadfully well-themed film festival.

A deeply atmospheric and terrifying new horror film, The Blackcoat’s Daughter centres on Kat (Kiernan Shipka) and Rose (Lucy Boynton), two girls who are left alone at their prep school Bramford over winter break when their parents mysteriously fail to pick them up.

While the girls experience increasingly strange and creepy occurrences at the isolated school, we cross cut to another story — that of Joan (Emma Roberts), a troubled young woman on the road, who, for unknown reasons, is determined to get to Bramford as fast as she can.

As Joan gets closer to the school, Kat becomes plagued by progressively intense and horrifying visions, with Rose doing her best to help her new friend as she slips further and further into the grasp of an unseen evil force. The movie suspensefully builds to the moment when the two stories will finally intersect, setting the stage for a shocking and unforgettable climax.

Director Oz Perkins makes his debut with The Blackcoat’s Daughter, though it’s taken so long to release (the film was finished in 2015) that he’s already made another supernatural thriller starring Boynton in the meantime, called I Am the Pretty Thing That Lives in the House. Perkins is thus far best-known as an actor, but he also has some serious horror cred, being the son of Anthony “Norman Bates” Perkins.

The Blackcoat’s Daughter will be in theatres March 31.