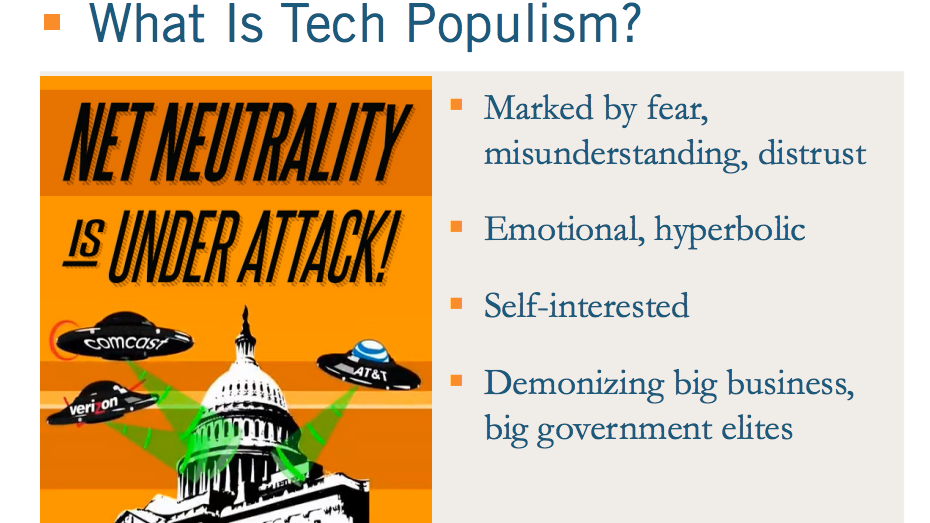 If you read tech coverage a lot, you might be forgiven for thinking it’s a little toothless. From glowing profiles of tech CEOs to breathless coverage of new technology that may yet turn out to be garbage, tech journalists can often forget to take a step back and look critically at the claims made by the companies they cover.

One DC think tank disagrees with that assessment. Yesterday, the Information Technology and Innovation Foundation (ITIF) released a report arguing that, in fact, tech reporting is too “pessimistic” about tech, and plays up concerns with technology for clicks. The report claims to chart an increasingly negative tone over the last 30 years in tech journalism, with more articles highlighting “potential ill effects of technology:”

The findings show that coverage of technology in the 1980s and early 1990s was largely favourable, with a heavy focus on the economic and military advantages afforded by advancing technologies. In the late 1980s, in particular, there was a notable focus on the economic opportunities afforded by the developing technology sector and its offerings. However, that tone has gradually shifted over the years, with more articles highlighting the potential ill effects of technology: its displacement of face-to-face interaction, its role in environmental degradation, its threat to employment, and its failure to live up to some of the promises made on its behalf.

ITIF held a panel discussion yesterday to herald the release of this report. Like so many policy wankfests in DC, the event was held in a grey conference room on K Street; that, like so many rooms in DC, was filled with a few dozen old white guys in suits. The panel was actually heavy on journalists: Amy Schatz, a former Wall Street Journal reporter now working for US Telecom, Politico technology reporter Ashley Gold, and the director of the Knight Science Journalism program Deborah Blum joined a senior Pew researcher and a representative of tech, Morgan Reed. Reed is the executive director of the App Association, which represents app and information technology companies and is sponsored by firms including Apple and eBay.

Reed, unsurprisingly, shared some of the report’s concerns about tech coverage. He said that while scepticism in journalism is good, “all of us” should want to push back on “Luddites” in coverage of tech. He took special issue with “civil society” organisations, saying some have “fundraising reasons” for being critical of technology. When I asked him what issues he felt advocacy groups and the press were being Luddites about, he cited privacy. He took issue with those who are “anti-advertising,” saying “in the privacy space” there are those who see advertising as “a net negative on society, and therefore refuse to acknowledge the positives that come from it and see everything as an increased privacy risk.”

Some of these themes are echoed in the report, which says its findings “support the idea of a ‘privacy panic cycle,’ which argues that the media tends to recognise more extreme claims, thereby creating an incentive for activists to steadily escalate their rhetoric about the negative implications of technology.” The idea of a “privacy panic cycle” originated with another ITIF report, which argued that “overwrought privacy fears can lead to ill-conceived policy responses that either purposely hinder or fail to adequately promote potentially beneficial technologies.”

It’s hard to agree that public policy is too restrictive of tech on privacy, given that, for example, an FCC rule that merely requires ISPs to get consent for collecting data may be obliterated soon. Coverage of tech companies‘ privacy policies is often the only way consumers really know what data is being collected about them; if tech companies want coverage of their privacy policies to be nicer, perhaps they should stop, say, trying to charge customers for privacy, or reading their notes, or tracking people with wi-fi-enabled trash cans. It’s up to the industry to show it’s made efforts to protect privacy, and not the media’s job to give it the benefit of the doubt.

So why is ITIF so concerned about the tech media acting as sceptics or “Luddites” about silly issues like online privacy? No idea, but hey did you know that ITIF gets loads of funding from tech industry groups.

According to the most recent available tax forms found through the Center for Public Integrity’s Nonprofit Network tool, tech and telecom industry trade groups have donated tens of thousands of dollars to ITIF. The National Cable & Telecommunications Association, now known as the Internet and Television Association, represents over 200 cable and telecom companies, including AT&T and Verizon. It spent $US13.4 ($17) million on lobbying in 2016, and has exercised its considerable might on issues like opposing municipal broadband. ITIF, coincidentally, recently released a report criticising “broadband populists” pushing for “government-run internet” like municipal broadband; an ITIF slideshow from 2015 took issue with “hyperbolic” “tech populism” on issues like net neutrality, which NCTA has opposed. Between the tax years 2011 and 2014, NCTA has given $US220,000 ($285,389) to ITIF.

Other tech companies have donated directly to the ITIF. Google, for example, lists it as one of the organisations it’s donated to, and The New York Times reported in 2007 that Cisco and IBM have also donated. As a 501(c)(3) organisation, ITIF isn’t required to disclose its donors, so we’ll never know exactly how much money companies have given.

Donations to think tanks that also happen to issue favourable reports while appearing neutral is a common tactic in DC’s lobbying scene. Last year, The New York Times reported that the Brookings Institution had a “practice of assuring that donors would see results from their contributions,” and that think tanks “frequently become vehicles for corporate influence and branding campaigns.”

An ITIF spokesperson told me that “no single supporter accounts for more than a single-digit share of our budget,” and that support from such organisations doesn’t influence its reports: “we operate free of external direction or bias, much like a newsroom, where there are firewalls between advertising and editorial. Contributors have no say in our policy analysis or editorial process.”

Much of the panel discussion yesterday focused on the problem of journalists using advocacy groups for quotes uncritically, as they face deadline pressures. This is a great point, as many articles that quote ITIF do so without mentioning its industry funding. Maybe that funding means nothing — maybe the telecoms donate out of their dedication to furthering knowledge — but it’s something to bear in mind next time you see them in the press. Or maybe I’m just a Luddite.