If the fact that the Earth is careening toward a sixth mass extinction event makes you uncomfortable, good news: it turns out, the biosphere may have rebounded “quickly” after the worst mass extinction in history. That, at least, is the implication of one remarkable fossil assemblage formed less than 2 million years after the so-called Great Dying.

The asteroid-supervolcano tag team that annihilated the dinosaurs 66 million years ago gets all the attention, but the deadliest mass extinction in Earth’s history took place 186 million years earlier, at the boundary between the Permian and Triassic geologic periods. For reasons that are still unclear, but likely include a combination of intense volcanism and climate change, up to 96 per cent of all marine life and 70 per cent of all terrestrial vertebrate species went extinct in a geologic blink. After the Great Dying, Earth remained biologically impoverished for 10 to 20 million years — or so paleontologists assumed.

“It’s been thought for, really since people have been considering it, that it takes a long period of time to come back from one of these major mass extinction events,” Dan Stephen, paleontologist at Utah Valley University told Gizmodo.

Stephen and his colleagues are now challenging that idea, by bringing to light an remarkable trove of fossils: the so-called Paris Biota from southeastern Idaho. In the latest issue of Science Advances, the researchers describe the seven phyla and 20 orders of life they have identified in this ancient seabed so far — a mixture of primitive creatures from the Permian, and more modern organisms from the early Triassic, including algae, sponges, squid, lobsters, fish and marine reptiles. The most astonishing aspect of the fossil find, however, is its age: 250.6 million years old, according to radiometric dating of nearby rocks.

This prehistoric seafood buffet was kicking around just 1.3 million years after the Great Dying, when most scientists assumed the ocean was still a post-apocalyptic wasteland. 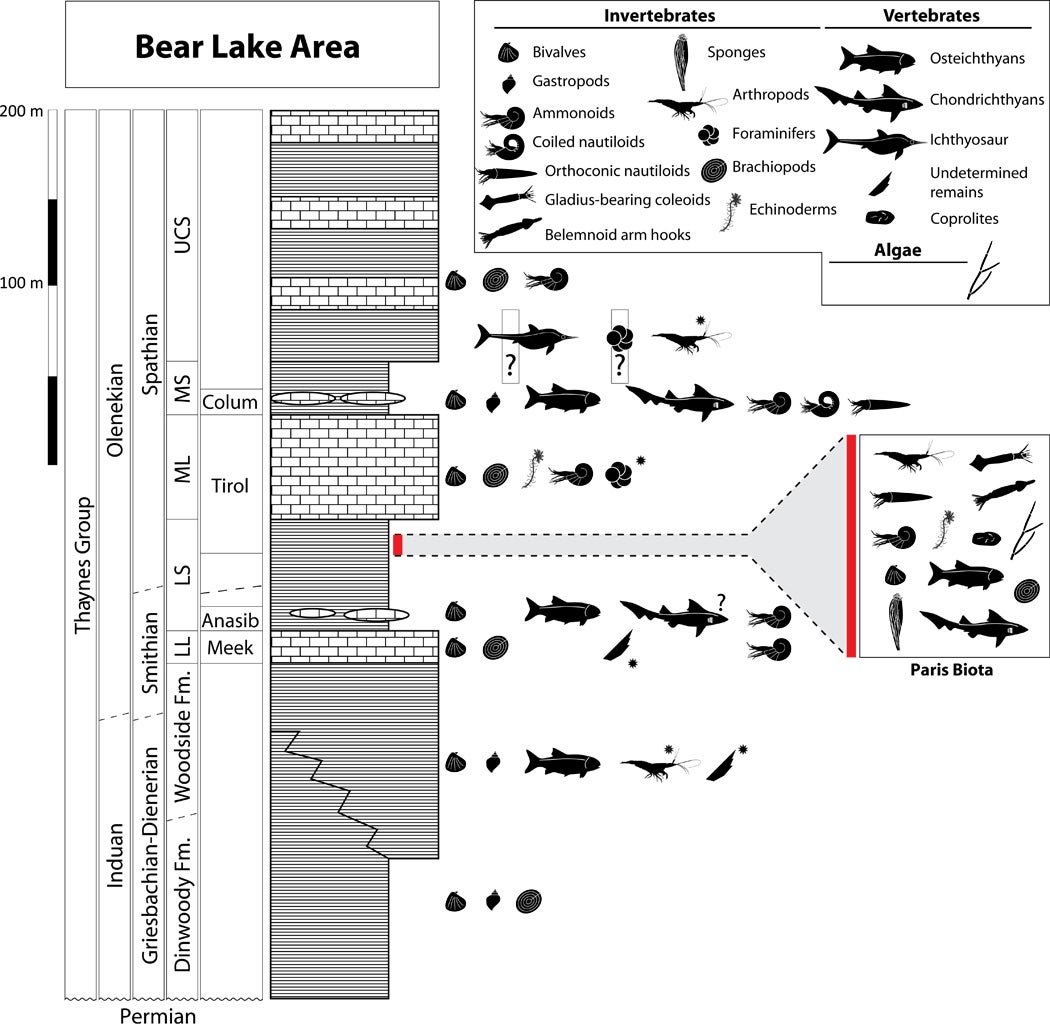 Graphic depicting types of organisms present in the Bear Lake are of southeastern Idaho in the Early Triassic. Image: Brayard et. al 2017

Right now, it’s unclear whether the Paris Biota was unique, or indicative of a broader pattern of rapid recovery. Fossil beds from the early Triassic are rare, and, while most features a lower degree of diversity than the Paris Biota, preservation issues could be skewing the record.

“Part of the tricky thing here is that the things that have hard parts are more likely to get fossilized than the things that are soft,” Stephen explained. “And it turns out, this particular locality in Idaho has really good preservation of softer critters,” which could help explain its unusually high diversity.

To build out the story, Stephen and his colleagues are on the hunt for other high-diversity fossil beds from the dawn of the Triassic. “There’s a handful of places around world that have this indication of diverse ecosystems,” he said. “Right now, we’re not entirely sure if it was just an isolated phenomenon or more widespread.”

Either way, the study strikes a hopeful note into what’s generally a pretty dismal topic, by hinting that complex ecosystems can emerge anew shortly after a mass extinction — even if the creatures that inherit the Earth bear little resemblance to those of the past.

The relevance to our present-day situation, at the dawn of the Anthropocene, in which species are disappearing at an estimated 1,000 times the background extinction rate, is not lost on the scientists who study deep time.

“For a lot of us paleontologists, we look at what’s going on in the present day very seriously,” Stephen said. “We see in the fossil record how large these disruptions are. 1.5 million years [to recover] is pretty fast for the geologic record, so perhaps [this study] does offer hope for the planet. But perhaps not so much for us humans.”