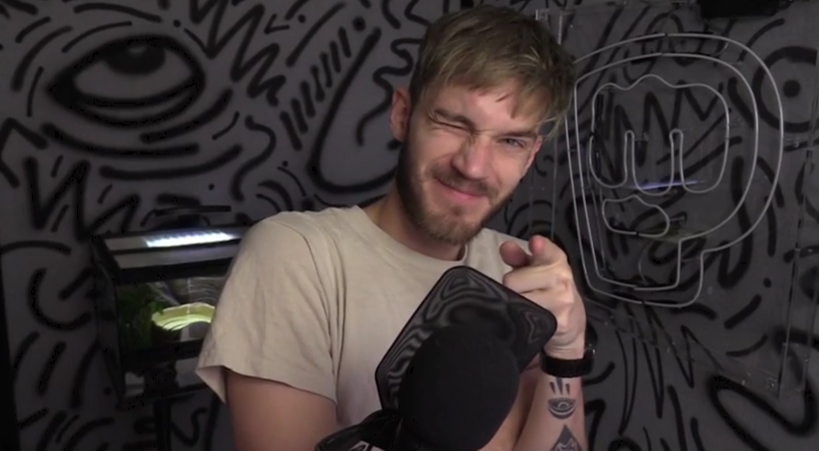 Following the Wall Street Journal asking questions about repeated examples of Nazi imagery and anti-Semitic remarks in Pewdiepie’s recent videos, Disney severed all of its ties with Youtube’s biggest star. Shortly afterwards, Youtube cancelled his show and removed his channel from its premium advertising service. With the charge of anti-Semitism the Wall Street Journal took Kjellberg’s work very seriously, as is their right, and clearly his partners did so too.

It’s perhaps worth pausing for breath. Kjellberg has made a habit in recent times of ‘trolling’ the media, most infamously with his promise to delete his channel when it hit 50 million subscribers. In that case he said he’d do it, then of course didn’t, and mocked the media for reporting his initial claim. In this case it seems from the video evidence Kjellberg is again trying to be provocative and ironic, without much of a larger idea behind it, and these clips have been picked up and reported by major media as straight-up examples of anti-Semitism.

Perhaps the most important context for this is that Kjellberg’s audience is extremely young, with most being younger than 20 years old. Even if Kjellberg is not an anti-Semite, this alone makes his behaviour highly questionable: the punchline to one of these jokes is two men, paid by him, play-fighting before unfurling a sign that says ‘death to all Jews.’

Put like this, it seems stark indeed. But YouTube doesn’t really work in such a straightforward way, and great creators like Pewdiepie use various techniques to manage tone and make their jokes. Kjellberg frames himself, the rapid-fire pace of his thoughts and jokes, with surprising cuts and amusing effects that emphasise his points, alongside exagerrated facial reactions and in-jokes. Obviously a lot of the humour is visual, and about quick contrasts.

Which is how you end up with shots of Kjellberg in an army uniform, apparently watching a Hitler speech with approval, perhaps intended as some sort of absurdist miniature. You get tiny glimpses of Hitler in title screens flashed up for a second. You get Kjellberg playing games where the layout is a swastika (and he’s clearly not happy about it). Hitler and the Nazi iconography is not really about the historical reality here – it’s more about Hitler’s omnipresence online as both meme and avenue of attack. If you want to see it for yourself, a selection of clips follow.

The provocateur’s instinct has always been there in Kjellberg’s videos, but this particular strain is reacting against the extremes of political discourse. ‘You can’t do this but I did I lol!’ There’s an interesting Venn diagram to be imagined here between the Pewdiepie audience, overwhelmingly young and male (the most obvious signal being Kjellberg’s constant talk of his fans as ‘bros’), and the political extreme he’s using for the joke: the so-called ‘alt-right’ movement, which appeals to young white men in particular, whose own economic prospects are often grim yet find themselves blamed online for all of society’s ills.

There is a deep well of resentment among certain young men, and a determination to fight back – provoke, mock, troll, whatever. Some control the instinct to lash out, some might make the odd snarky comment, some go all-in, and some try to mock the whole thing but instead produce videos with signs saying ‘Kill all Jews’ for an audience of 53 million, most of whom are children and teenagers. And so this happens.

The above image is a popular white supremacist website which is obviously loving all this attention. This image captures that, whatever Kjellberg’s intentions, he has given succour to scumbags. On any given day, week or month a website like this will be railing against something – but it now has to sit on Kjellberg’s shoulders that he’s made a thing they can really use.

Kjellberg is not just one of the most famous faces in the world, but is now being embraced by the far-right as a propaganda tool. They see the value in these images and clips of Pewdiepie in settings with Nazi imagery and anti-Semitic remarks, which will never be used or placed in the context they first appeared. Even if it all seems cool now, I wonder what Kjellberg’s thoughts will be in a decade, two or three decades, and for the rest of his life as these images recur.

Kjellberg’s response to these events was posted on his tumblr:

It came to my attention yesterday that some have been pointing to my videos and saying that I am giving credibility to the anti-Semitic movement, and my fans are part of it as well for watching […] This originated from a video I made a couple of weeks ago. I was trying to show how crazy the modern world is, specifically some of the services available online. I picked something that seemed absurd to me—That people on Fiverr would say anything for 5 dollars.

I think it’s important to say something and I want to make one thing clear: I am in no way supporting any kind of hateful attitudes.

I make videos for my audience. I think of the content that I create as entertainment, and not a place for any serious political commentary. I know my audience understand that and that is why they come to my channel. Though this was not my intention, I understand that these jokes were ultimately offensive.

As laughable as it is to believe that I might actually endorse these people, to anyone unsure on my standpoint regarding hate-based groups: No, I don’t support these people in any way.
Yeah, what do you mean you can’t pay two guys to carry a ‘death to all Jews’ sign in 2016?

Kjellberg’s argument is terrible: “I know my audience understand [my thinking] and that is why they come to my channel.” The man has 53 million subscribers – the idea he has some omniscient grasp of their political beliefs, how they come to his channel, or what they take away from it is self-evidently ludicrous. Either he has a worrying god complex, or simply hasn’t thought this through.

These videos have resulted in Pewdiepie being plastered across website front pages. This will be the first time some people hear of him or watch him; they may just see the image with the sign out of context. They might be attracted by the ideas anyway, and feel this kind of joking and language legitimises them. They may just be a Jewish kid, looking for some news about videogames.

Young audiences absorb what’s around them, and reproduce it in various (often funny) ways. In hindsight I’m struck by, among all the gaming community reactions following Trump’s victory in the presidential election, the Minecraft subreddit’s devotion to building walls. It’s perfect because it fits the game, of course, but it also shows how deeply this Trumpian idea has burrowed into the US psyche.

And, you know, there’s a question of basic human decency here. Is getting poor people to hold up a sign that says ‘death to all Jews’ reflecting badly on them, or on the website that employed them, or on the person who ultimately paid them to do it? Is a blonde-haired, blue-eyed Swede paying two Indian men a pittance to display an anti-Semitic sign “insanity,” as Kjellberg would have it? Or is it just sick?

Disney had no choice in the matter. At bottom this is a story of unchecked influence. Felix Kjellberg is good-looking and great to watch, gained a huge following through this, and therefore thinks he’s a genius. In one respect he clearly is. The problem is that, at 27, he’s become the boy who never grew up. Kjellberg’s unique position as king of the influencers would much better-suit someone who considers the consequences of his actions. He should know, better than anyone else in the world, that nothing once said is your own.

Kjellberg’s audience will stick with him, of course they will, and this will be painted as an attack by those who just don’t ‘get’ his humour. You can see why because, when it works, it really works. The Israeli-based freelance website through which Kjellberg paid for a Jesus impersonator to say “Hitler did absolutely nothing wrong” (another meme) shortly afterwards banned the account of the user involved. Kjellberg notes this news and then: “Can I just point out that it’s a little bit ironic that Jews somehow found another way to fuck Jesus over.”

As the viewer processes this line, Kjellberg immediately stops speaking, briefly looks below the camera, then back up to flash the most brilliant, photogenic smile you’ll ever see. It’s a great line and a great delivery. “No? OK…” and he moves swiftly on. Even in this context his quickfire wit comes first, and he’s telling the ‘bros’ to stay cool – I got this, and nothing’s changing.

One has to hope that this situation is a cause for more serious reflection. Kjellberg may say it’s all just entertainment, and he can hug that word close whenever reality briefly pierces his gilded bubble. But if it is, then the world’s children and teenagers deserve a better class of entertainer.

This article was originally posted on Kotaku.