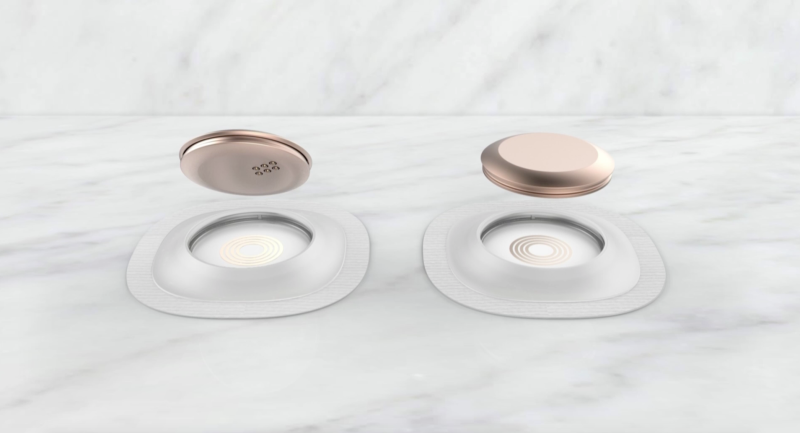 Since launching in 2011, Silicon Valley healthcare startup Sano Intelligence has kept a low profile. Despite raising $US20 million ($26 million) in venture capital, the company founded by ex-Bain Capital analyst and bioengineering grad Ashwin Pushpala has yet to release its product — a continuous glucose tracker that sticks to a users’ skin and monitors blood through an app. Gizmodo has obtained new details about the device, and how the company intends to market it as a product for “metabolic insight” for non-diabetics, rather than to diabetics who regularly need to track their glucose. The strategy means Sano doesn’t need FDA approval in the US, but doctors and diabetes experts interviewed by Gizmodo question whether the product would have any benefits to non-diabetics at all.

Pushpala spoke about the glucose tracker, which the company aims make available through beta release this year, at the tiny healthcare focused Hyper Wellbeing conference in Silicon Valley in late 2016. In a video of Pushpala’s “Wellness as a Service” talk obtained by Gizmodo, he reveals the first renderings of the device, which looks like a nicotine patch with a circular piece of metal in the centre, containing the Bluetooth receiver and battery. It “kind of looks and feels like sandpaper or Velcro when you put it on the skin,” Pushpala said in the presentation. “These are minimally invasive microstructures that are placed on the body.” 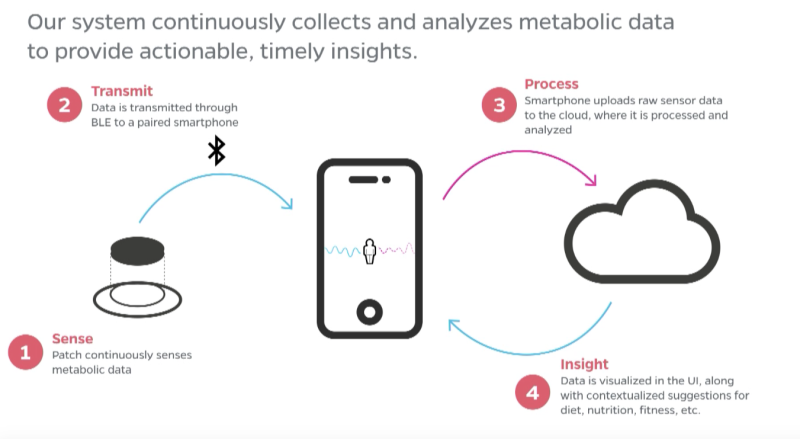 A slide from the Sano presentation explaining the device. Image Courtesy Hyper Wellbeing.

Those microstructures on the bottom of the patch sense interstitial fluid to calculate blood sugar. Then, as Pushpala explains it, the patch “senses metabolic data” (glucose concentration) and transmits it to the app; the “raw” data is then sent to the cloud and analysed. Then, the app would provide “personalised metabolic insights in real-time” and would help users “stabilise sugar concentrations”. Tracking glucose levels throughout the day would allow users to see how different things they eat affect their blood sugar levels and metabolism, Pushpala claimed.

Continuous glucose monitors (CGMs) have already existed for 15 years and are used widely by diabetics — people whose bodies either don’t produce insulin or don’t use insulin properly, which can lead to abnormally high and low blood glucose concentrations, necessitating regular monitoring. There are products on the market made by Abbott, DexCom and Medtronic. They require daily calibration to make sure they are accurate, generally involving a finger prick test with a standard glucose monitor. Pushpala maintains the Sano device doesn’t need external calibration. As medical devices, the CGMs also require FDA approval in the US, while over-the-counter tracking products, such as a FitBit, do not. While Sano hasn’t begun to seek FDA approval, it plans to in the future, but before it does, it plans to launch as an over-the-counter product for people without diabetes.

As Pushpala noted in his presentation, CGMs are currently sold to people with type 1 diabetes (which accounts for roughly five per cent of cases and develops in children and young adults) and type 2 diabetes (which can develop at any time, and is influenced by diet and lifestyle). In the talk, Pushpala said that Sano wants to expand the current glucose testing market to new “masses” and “treat these folks like consumers” — “preventative” groups of people who are not diabetic, with a focus on those who are “overweight” and “pre-diabetic”. According to Chantelle Darby from Sano’s public relations, the company will also target “a variety of folks” and “the weight loss management, the fitness crowd will be our focus”. Sano’s freshly updated website makes it seem like a wellness aid for diet and fitness. 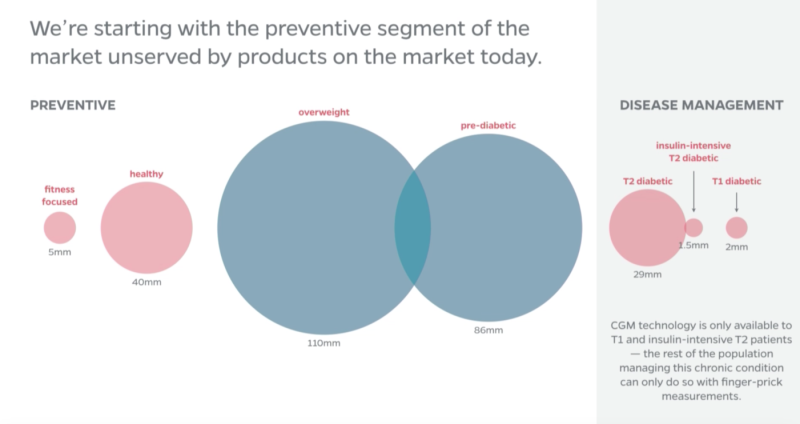 “I think they’re just trying to get around the law,” David Levitsky, a professor of nutrition at Cornell University, told Gizmodo. “I think to get FDA approval, they have to demonstrate efficacy. And I don’t think they can, because they don’t know what [Sano’s product] is good for yet.”

“[Sano’s product may be] a little bit more sophisticated than quackery — I’m sure there’s some fantastic technology that underlies it — but even if you had a exquisite measure of glucose, it wouldn’t tell you that much,” Levitsky said. He said that to accurately monitor metabolism, how well your body burns energy to keep up basic functions, you need to know more information than just your glucose levels, including fat burned. 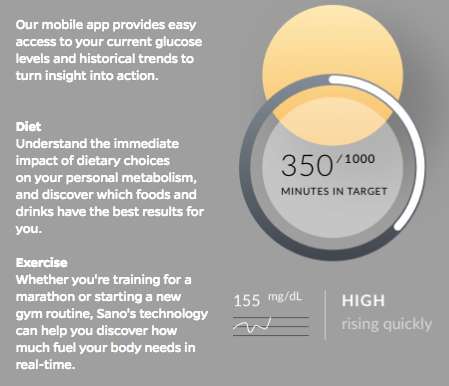 In a phone conversation with Gizmodo, Pushpala clarified that blood glucose concentration is not the only number that is needed to calculate metabolism, and though his earlier presentation promised “personalised metabolic insights” he backed away from this claim in our interview. When we reached out to Sano for clarification, the company specified that the device is only tracking “one very important element of metabolism (glucose)”.

Mark Schutta, MD, director of the Penn Rodebaugh Diabetes Center, said “there isn’t really any merit to” continuous glucose monitoring in non-diabetics, whose blood glucose concentrations will vary throughout the day but are ultimately regulated by insulin produced by a healthy, functioning pancreas. He argues that a healthy person using the device could find out some useful information, for example, that certain foods affect their blood sugar more than they expect, but ultimately, “I think it’s not a useful device. The truth of the matter is that if you’re going to a good primary care doctor and you’re at risk for diabetes, they should be screening you with the appropriate test, either on an annual or bi-annual basis. So, I don’t see much utility in something like this.” 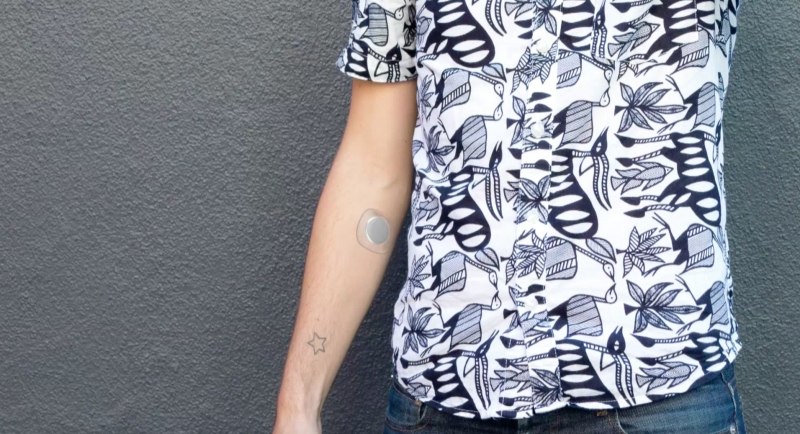 Medical CGMs and maintenance can cost upwards of $US3000 ($3908) out of pocket per patient per year in the US, and are rarely covered by insurance for Type 2 diabetics. (These are high figures, especially considering that Type 2 diabetes disproportionally affects the poor.) In his presentation, Pushpala said Sano’s device would cost “a few hundred dollars” over the course of a year.

“I doubt that people without diabetes would persist wearing the device given the cost and inconvenience,” said Janet McGill, MD, Professor of Medicine and Director of the Fellowship in Endocrinology, Diabetes and Metabolism at Washington University. She said CGMs are a “godsend” for patients with diabetes, but cumbersome and expensive. Added Schutta: “We can’t get devices like this paid for by insurance companies, for our type 2 diabetics who need them. So why would we have a product that people use who aren’t even diabetic?”

McGill also said the risk goes beyond just not being needed or being something people wouldn’t want: “There is a risk that too much information would create unnecessary worry, concern and health care issues that are not warranted. I would fully expect that the persons needing it the least would be the most likely to want to wear it.”

“I’m all for new technology and science that helps detects things early and helps patients become involved in their care,” Dr Schutta added. “But there’s this group of people who are susceptible to you know, sort of quackery… This is a little out there, if you ask me.”

“I would fully expect that the persons needing it the least would be the most likely to want to wear it.”

Pushpala, however, may not be deterred by scepticism from the medical profession. With a masters in bioengineering from the University of Pennsylvania and a background in investing in tech companies at Bain, Pushpala was named in this year in Forbes’ Healthcare 30 under 30 list. His blurb notes how he thinks traditional preventative healthcare is “fundamentally wrong” in its approach, and Pushpala emphasised in his talk the strength of Sano’s team, which he said includes engineers from Apple, Google, Samsung and FitBit as well as researchers from Stanford and MIT.

Still, Pushpala appears conscious of a new scrutiny on Silicon Valley health startups after the Theranos saga in which it was revealed the much-hyped blood testing startup that had raised almost $US700 million ($911 million) had been fudging test results. “We’ve validated this technology with clinical studies,” Pushpala said in the presentation. “A lot of, um, you know, questions have come up over the past year or so with respect to blood diagnostics and I’m sure everyone knows what company I’m talking about here. And we’ve wanted to take the approach of validating or technology before we bring it to market.”

When Gizmodo asked for more details of the validation study, Sano said it had completed its first clinical test, a feasibility study that was not subject to peer review. It hadn’t determined when it planned to release the results and also has not begun nutritional trials. Sano told Gizmodo it plans to make its continuous glucose tracker available through beta release in early winter. It also clarified that it intends to have its studies peer-reviewed before the beta launch.