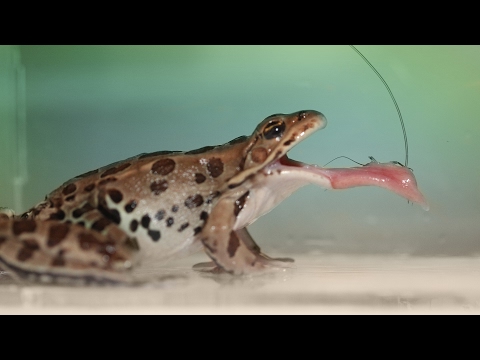 We all know that frogs have one of nature’s coolest methods of catching their prey — blasting their tongue out and latching onto the victim. But we haven’t fully understood how the process works. New research shows that frog saliva transforms in surprising ways and could be applied to making super adhesives.

In the delightfully titled paper, “Frogs use a viscoelastic tongue and non-Newtonian saliva to catch prey“, researchers from Georgia Tech have outlined the step-by-step process of what happens when a frog fires its tongue.

In order to conduct their study, lead researcher Alexis C. Noel and her colleagues filmed dozens of frogs in slow motion and gathered scraped samples of saliva from 17 different specimens.

According to Noel, the first important thing about the whiplash process of licking a cricket out of the air is that the frog’s tongue is “one of the softest bio tissues known”. She compares its softness to “brain tissue”, its elasticity to a “bungee cord” and its behaviour on impact with its prey to “shock absorbers on a car”. These properties combine to quickly wrap around an insect and let that magical spit do its work.

Noel explained the three phases of the special “reversible” saliva to Science Daily:

When the tongue first hits the insect, the saliva is almost like water and fills all the bug’s crevices. Then, when the tongue snaps back, the saliva changes and becomes more viscous — thicker than honey, actually — gripping the insect for the ride back. The saliva turns watery again when the insect is sheared off inside the mouth.

This means that frog saliva can be classified as a non-Newtonian fluid. Like tomato sauce or paint, a constant coefficient of its viscosity cannot be defined.

Noel told the Washington Post that “recent studies of chameleons hint at the same type of mechanism”. As far as applying this research in a practical manner, Noel told Science Daily, “Perhaps this technology could be used for new Band-Aids. Or it could be used to create new materials in soft manufacturing.” But that’s just her conservative ideas. On a more ambitious level she dreams of frog-inspired quadcopters snatching up cargo from the sky.