Those in attendance at the Formula E Buenos Aires ePrix witnessed history yesterday. Roborace debuted what’s being billed as the first competitive race between self-driving cars on a professional Formula E track. How’d it go? Great! Or, it was at least great for the winning car.

Roborace is a startup for high-powered self-driving race cars and its goals are testing the limits of this burgeoning tech. While navigating the unpredictable roads and traffic of everyday driving is an unbelievable challenge in its own right these cars have to handle split second decisions at top speeds.

The “Devbots” that hit the track yesterday are the second iteration of Roborace’s designs. The first was dubbed “The Robocar” and it had a slick design by Daniel Simon, a Hollywood special effects guy who was responsible for the latest vehicle designs in Tron: Legacy and Captain America: The First Avenger. Devbots aren’t quite as pretty as The Robocar but they can be a driven by a human or a computer, which allows the company greater flexibility in testing. 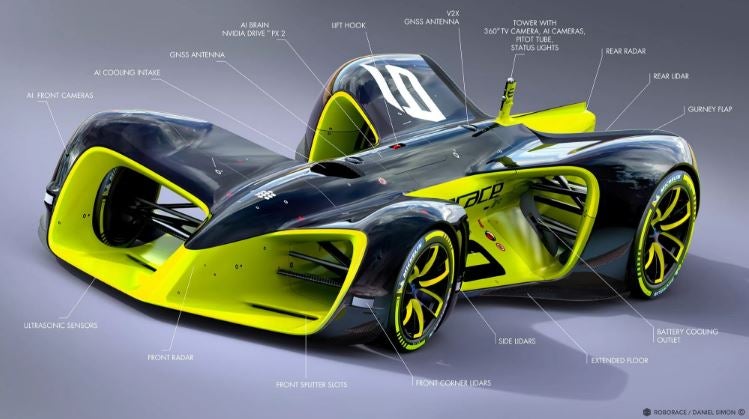 Yesterday’s race was probably most notable for the speeds the cars reached. Topping out at 185km per hour, these test devices weren’t hitting the over 322km/h speeds of human driven Formula E races. But it’s still impressive that the software can handle the complex racing maneuvers at that pace.

Devbot 2 performed admirably before crashing into a barrier on one of the turns. Since Devbot 1 completed the race, it was the winner. Unfortunately, it seems Roborace isn’t ready to publicize this test and there’s no official video of the race. You can see them starting off in this video tweeted by a journalist who was present at the time:

Roborace hopes to eventually create a league in which competing teams go head-to-head with identical Robocars — software tweaks will fuel the competition. Races like yesterday’s are just the beginning of the development/debugging process. Among the successes of the test was finding out how the car reacts when an obstacle makes its way on to the track:

Who let the dogs out? We've always wanted obstacles in Roborace ? #BAePrix pic.twitter.com/jUOyLqnrie

It’s hard to say if this will actually be a sport that people will want to watch. There will certainly be purists who believe it’s not real racing unless a human is behind the wheel. But remember, it’s unlikely that crashes will be eliminated entirely. So the drama of a possible collision should still be present. You’ll just be able to cheer on the spectacle without worrying about human safety.

You can see some photos of the wrecked Driverbot 2 below: