Enormous Pleistocene Landslide Discovered Off The Coast Of Australia 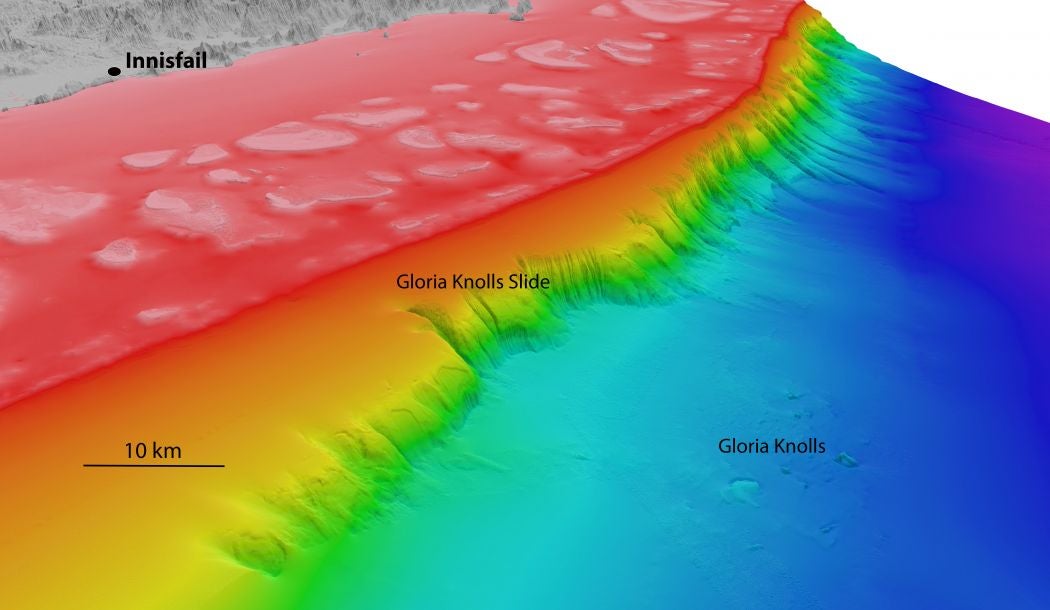 Around 300,000 years ago, a ridge near Australia’s Great Barrier Reef collapsed, unleashing a massive undersea avalanche. The ensuing landslide scattered debris for kilometres and triggered a sizeable tsunami, according to new research.


North-westerly view of the Gloria Knolls Slide and Gloria Knolls off Innisfail, Australia. Depths are coloured red (shallow) to blue (deep), over a depth range of about 1700m). (Image: www.deepreef.org)

The remains of the ancient slip, known as the Gloria Knolls Slide, were discovered 75km off the north Queensland coast, and at the bottom of the Queensland Trough — a vast basin that runs adjacent to the Great Barrier Reef. A team led by geologist Robin Beaman from James Cook University made the discovery while conducting 3D mapping of ancient reefs in the giant gully.

The research, published in the journal Marine Geology, identifies a debris field of large blocks, known as knolls, and numerous other blocks scattered over 30km from the source of the collapse. When the cliff wall failed, it released a whopping 32 cubic km of rock, spilling to a depth of 1350m. That’s about 30 times the volume of sediment contained in Australia’s famed Uluru sandstone monolith.

After discovering the knolls, the researchers used 3D mapping to uncover the source of the landslide. 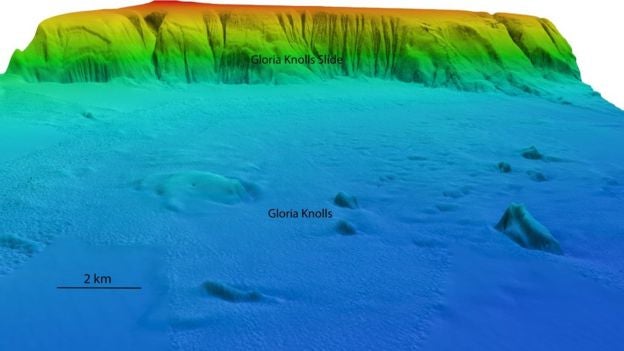 “We were amazed to discover this cluster of knolls while 3D multibeam mapping the deep GBR seafloor,” said Beaman in a statement. “In an area of the Queensland Trough that was supposed to be relatively flat were eight knolls, appearing like hills with some over 100 meters high and 3 km long.”

The sudden collapse of the wall contained enough potential energy to produce an 27m-high tsunami wave, but the giant wave, as it moved towards the ancient Australian coast, was likely dampened by the surrounding corals. “The Great Barrier Reef acts like a giant porous breakwater to reduce the energy [of ocean swell],” said Beaman in an interview with the BBC. “If it was in existence at the time of this landslide, it would have done a similar job.” Looking ahead, the researchers would like to know if the tsunami risk posed by similar landslides threaten the Queensland coast.

As part of the study, the researchers took sediment samples from a knoll at a depth of 1170 meters. Analysis of the samples confirmed the presence of both living and fossilised coral species, gorgonian sea whips (a fan-shaped soft coral), bamboo corals, molluscs and stalked barnacles. The oldest fossilised coral was dated to 302,000 years ago, so the landslide couldn’t have happened any earlier than that.

Prehistoric undersea landslides have been recorded before, including the Agulhas slide — an event that unleashed 20,000 cubic km of debris off South Africa about 2.6 million years ago. If that sounds like a lot, it is; that’s about 625 times bigger than the Gloria Knolls Slide, and it released nearly enough mass to fill all of America’s Great Lakes.