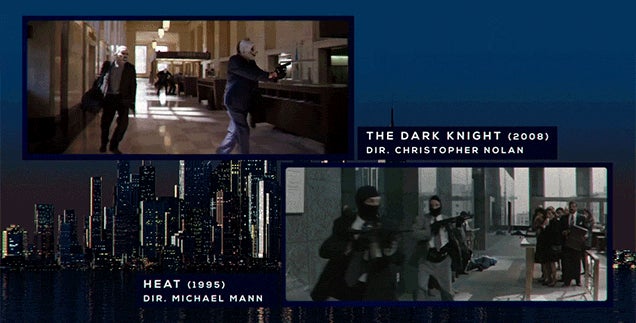 Video: The Dark Knight is very probably the best superhero movie of all time. That has a lot to do with Joker being the best villain and Christopher Nolan being a fantastic director, but it also has to do with… Michael Mann? Here’s a video from Glass Distortion that shows scenes from The Dark Knight next to scenes from Mann films such as Heat, The Insider, Collateral and LA Takedown. You can easily spot the influence.

Nolan actually screened Michael Mann’s “Heat” for all his department heads before going into production, he say once: “I always felt ‘Heat’ to be a remarkable demonstration of how you can create a vast universe within one city and balance a very large number of characters and their emotional journeys in an effective manner.”﻿