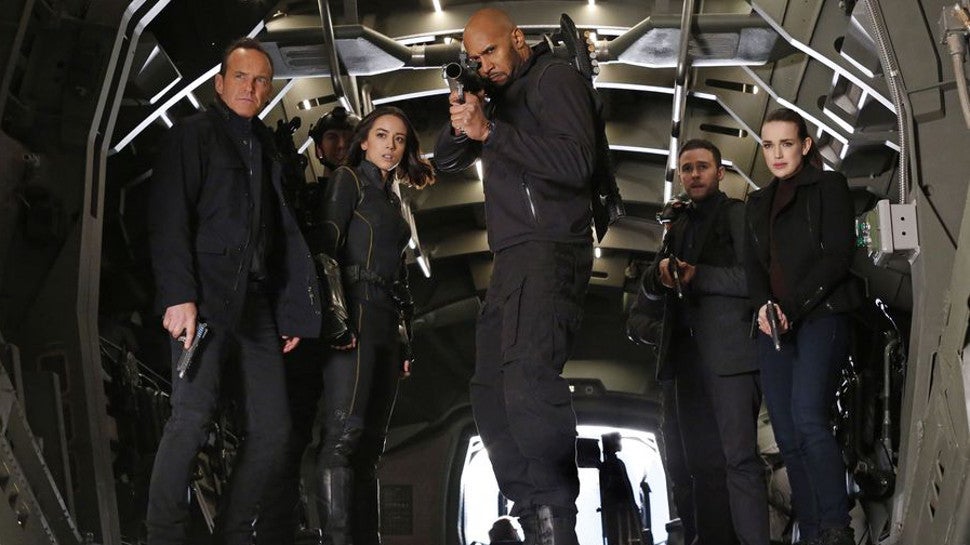 Ever since skeezy Dr Holden Radcliffe made his first Life Model Decoy, I’ve been waiting for this. Sure, he created Aida to infiltrate SHIELD HQ and steal the Darkhold; then he imprisoned Melinda May and sent an unwitting LMD of her as back-up. But that’s small potatoes to the LMD craziness seen over and over again in Marvel Comics. Well, the latest episode of Agents of SHIELD upped its game.

As revealed in the final moments, not one, not two, but four new LMDs have replaced core team members — Coulson, Director Mace, Daisy/Quake and Mack — leaving only Fitz and Simmons as the remaining main SHIELD characters who are also human. (Although I still have some suspicions about Fitz…) Oh! And Coulson woke up the Melinda May LMD, so it’s two-to-five.

These LMDs aren’t just after the Darkhold, since Radcliffe already has it — they’re presumably part of the plan of the evil, Inhuman-hating, Phil Coulson-loathing Russian guy who’s the big bad of the season and whose name I haven’t bothered to learn. We did see Quake — the real Quake — kick Russian Guy’s arse, knocking him out cold. But apparently sometime after that, she and the others were taken. Could Radcliffe still be pulling the strings? Does he have bigger plans? Plans which involve replacing as many main SHIELD as possible?

I swear to God, if this show doesn’t give us a Brett Dalton/Agent Ward LMD by the season finale, it will be the most wasted of wasted opportunities. (I also hope he’s programmed to be loyal to SHIELD, because I would very much like a season where everybody has to work with a heroic robot clone of someone they all hate.)