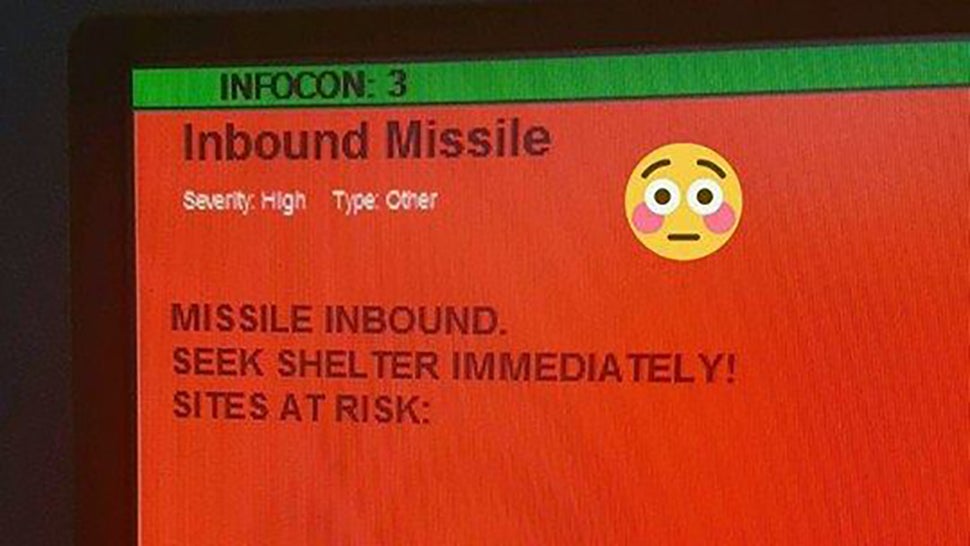 The message read “MISSILE INBOUND. SEEK SHELTER IMMEDIATELY!” as it took over the screens of Air Force personnel working at the 52nd Fighter Wing at Spangdahlem Air Base in Germany, earlier this week.

It was accidentally sent out to all terminals through the bases AtHoc emergency alert system that is typically used for weather updates. Spokesman Maj. Bryon McGarry told Stars and Stripes, “One of the command post controllers was building a template for this specific thing that was posted.”

The message was intended to only go to one person but he “inadvertently sent it to everybody”. Eight minutes after the message announcing impending doom popped up, a soothing blue screen went out across the base’s terminals telling everyone to chill out.

All reporting on the incident comes from official sources through military media like Stars and Stripes or Air Force Times. If there was a freak out on base, no one seems to be spilling the details.

The person responsible for the accident was reportedly counselled and procedures were updated to prevent a similarly alarming situation from occurring in the future.

In the world of military social media, this was viral comedic glory. The image you see up top comes from a Facebook group called Air Force amn/nco/snco. The embarrassed face was added but looks quite appropriate. Other personnel jumped in with jokes about the ’80s cold war comedy WarGames and made humorous cartoons.

You can see the original image here. Lets just take a second to appreciate that low-fi goodness that looks like an old-school virus payload, as well as the fact that it instructs you to take shelter immediately but first click that you acknowledge your inevitable demise.