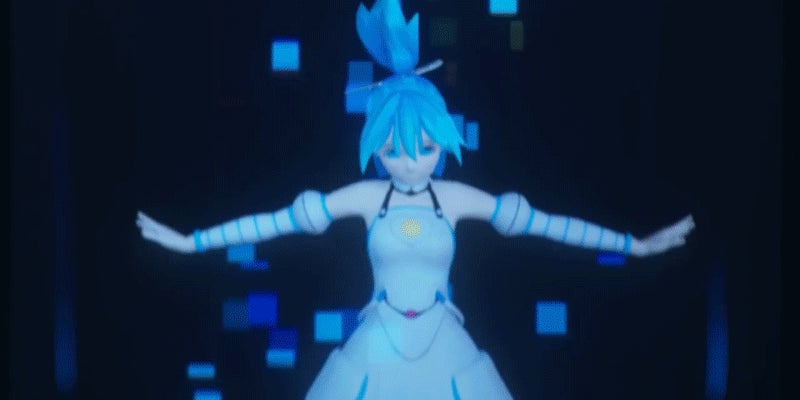 Like a mix between Her and the Black Mirror Christmas Special, the Gatebox is a creepy personal assistant that puts the emphasis on personal and doesn't seem to do much assisting.

In a really slick video that probably cost more to produce than the gadget cost to develop, you can see a fantasy play out of how this anime version of the Amazon Echo would improve your lonely existence.

As you can see, the device gives its users a friendly, animated face to interact with rather than just a cold, lifeless hockey-puck-like Echo. The friendly face also has a short skirt and is ready to do your bidding. She texts you messages to "have fun at work" and begs you to "come home early."

When you let her know that you're on the way, she excitedly says "yaaay" and wakes from her own isolated life in a glass tube to turn on the lights for you.

When the protagonist of the video (you, he's supposed to be you) arrives home, an almost unbearably sad scene occurs. As he goes to sleep he is thankful, thankful that someone is home for him. "Feels great," he says.

Even if you step back from the uncomfortable sexual dynamics here, this device isn't so much a terrifying glimpse of future isolation — it's a cynical ploy to gussy up questionable tech with emotional fulfillment. The company's page for specifications reveals little detail but plenty of promises about bringing the "character close to you" and "therapeutic fun." All that therapy, that may not even work, will set a buyer back $US2500 ($3423).

"Azuma Hikari" is purportedly just the first character and presumably (?) more are to come. In the meantime, the company claims that you can hook a Gatebox up to your PC and "watch movie contents, create original characters, or even just use for your own pleasure." Wink. We get ya.

I'd never begrudge someone the chance to indulge a harmless (?) fetish or use tech to feel a little bit less lonely. But this thing is pretty suspect and runs the risk of taking vulnerable people for a ride.