Photo: AP The US House Intelligence Committee released a report today detailing the government's version of what Edward Snowden did in the lead up to 2013. And while it contains a bunch of interesting allegations, the most serious claim is that Snowden is actively talking with Russian intelligence agencies.

The newly declassified report is 33-pages long and contains portions that are heavily redacted. Ironically (or not) the portion alleging that Snowden has been in contact with Russian spy agencies is redacted pretty thoroughly (highlighting mine):

Excerpt from a 33-page report by the US House Intelligence Committee, alleging that Edward Snowden is in contact with Russian intelligence services Obviously, the rest of the report doesn't paint Snowden in a very favourable light either. One of the more interesting allegations in the report is that Snowden repeatedly failed an NSA-administered test about FISA Section 702, the very law that covers the kind of intelligence gathering Snowden helped expose.

Another excerpt from the report (highlighting mine): 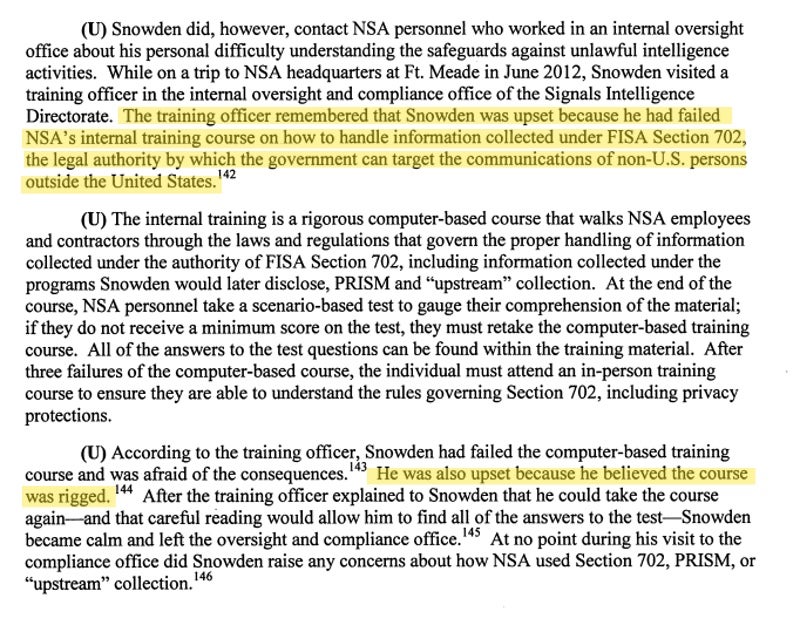 Excerpt from a report declassified today by the US House Intelligence Committee, alleging that Edward Snowden failed an internal training course about how to handle information collected under FISA Section 702 Curiously, the report doesn't say precisely why Snowden failed the test at least three times. Was it because he believed there should be stronger protections for individuals? The report isn't clear.

The entire thing needs to be taken with a huge grain of salt, of course. The US government has repeatedly claimed that Snowden's actions have put the lives of Americans at risk. And yet they have never been able to point to a single instance when that was the case. This report is no different in that regard.

Snowden may not have many answers for us as we enter the year 2017. In fact, while I've argued before that Snowden is a patriot, he's no longer the person we should be listening to as we move into the Trump administration. But this report won't change many minds either way.

At the end of the day, the government is making an assertion about Snowden's current activities that are surrounded in black bar redactions. And after Snowden's revelations, the American people are less likely than ever to just take the government at its word.