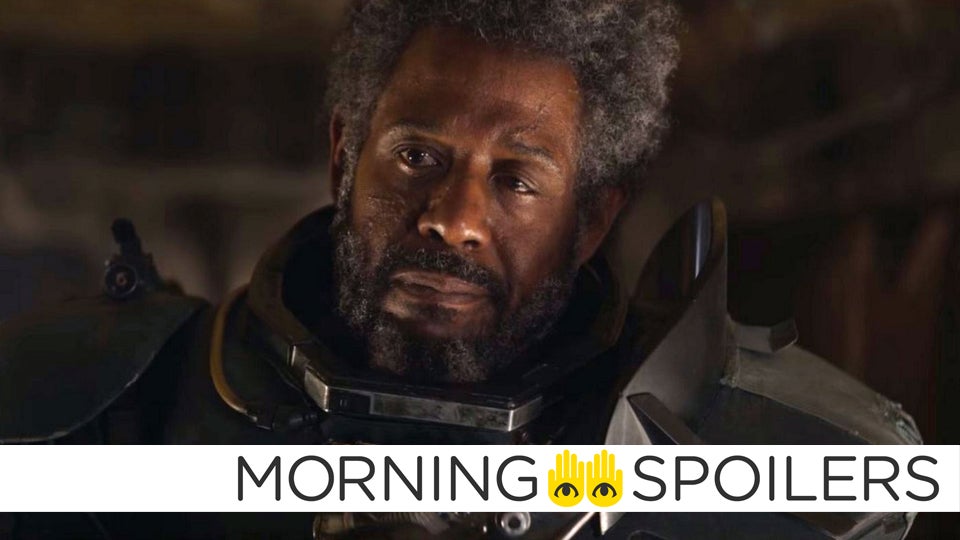 The director of Jurassic World 2 knows he has some large velociraptor shoes to film. Sleepy Hollow's new star has some very reasonable concerns. Plus, new images from Ghost in the Shell, The Mummy and Logan. Spoilers ahoy, my mateys!

Lucasfilm president Kathleen Kennedy is pushing for more Saw Guerrera, revealing he originally had a larger role to play in Rogue One.

To be honest, we originally thought we were going to develop Saw into something much larger, but we couldn't accommodate it. So he is not in the movie as much as we would like to have him in the movie, which creates the opportunity to explore his character even further in our future development.

Star Walton Goggins is still super-excited to be a part of the movie:

I'm just so excited about it! I'm such a big fan of Alicia and this director, Roar [Uthaug]. Quite honestly, the script feels like it's already been in the world, in some ways. The structure and the foundation of this story is so solid and so interesting. It's so unbelievably entertaining, and yet it's real in the journey that it takes you on. And this person that I get to play is confused and angry and desperate. I'm just looking forward to getting in his head. I'm really, really, really excited about it.

Director J.A. Bayona has some deep thoughts about trying to make the newest Jurassic Park movie:

After doing The Impossible and A Monster Calls I said, 'I want to have fun now.' So, let's do a dinosaur film with Spielberg. It's great, but at the same time it's massive and way bigger than [the last] one.

I think what is tricky about doing the fifth movie of a franchise is how will you bring in new stuff and still pay tribute to what we all know and the legacy of the film. So, it's the balance between the new stuff and the old stuff. I think Colin did a great job in the first one finding the balance between what people are expecting and what people are being again. I was kind of surprised when he pitched me the story because it leads the story to a place that we've never seen before and it brings some of the most important elements from the other films and makes something with them. I thought that was very interesting. It's the second chapter of a trilogy so it gets the story to a place that wants you leaving more and more.

This latest pic from Hugh Jackman and James Mangold is less Johnny Cash and more "man shamefacedly leaving the strip club at 6:20AM".

Empire has a new photo of Scarlet Johansson as the Major.

Scarlett Johansson for Ghost In The Shell new photo. pic.twitter.com/1JWsiOg0n5

A synopsis has also been released.

Thought safely entombed in a tomb deep beneath the unforgiving desert, an ancient princess whose destiny was unjustly taken from her is awakened in our current day, bringing with her malevolence grown over millennia and terrors that defy human comprehension. From the sweeping sands of the Middle East through hidden labyrinths under modern-day London, The Mummy brings a surprising intensity and balance of wonder and thrills in an imaginative new take that ushers in a new world of gods and monsters.

Jeffrey Bell confirms the current Ghost Rider arc is over... for now.

[Ghost Rider is] a lot for 22 [episodes], especially with everything else that we like and care about on the show. It would feel like one flavour over a long period of time, but we've certainly left it open to revisit.

But moving forward, showrunner Jed Whedon is ready to get deep into the world of Life Model Decoys.

This year we're getting to play with a lot of the toys that we've been hoping to play with," he shared. "[LMDs are] something that we've been wanting to get to, and now we're finally able to get to. We want everything to feel like its own mini world, and to have its own flavour. So we do think you'll come into the next section [of episodes] and immediately feel like, 'Oh, this is a different kind of story.' So we're excited about that.

I've said it before, but if there isn't a Life Model Decoy of Agent Ward trotted out at some point to freak everyone out, it will be a damn shame.

Janina Gavankar is worried her character, Diana Thomas, won't be accepted by fans who miss Abbie.

I'm not an idiot. I'm totally nervous that people are going to hate me. But someone had to take the job, and I was so honored that [Sleepy] called me in the first place. I wasn't going to say no.

The characters on the show miss Abbie. They are grieving for her loss, as the fans are. By the way, I've seen every episode — I am, too. She's incredible. She's part of the fabric of the show.

Let's remember, however, that none of the crap that Sleepy Hollow pulled last season was Gavankar's plot.

Both Livewire and Metallo will be returning this season.

Finally, here's the synopsis for 6x03, "Oh Captain, My Captain".

In order to stop the rise of Captain Renard, Nick devises a plan that will take him out of his element. Adalind and Monroe do everything in their power to keep the plan on track. Meanwhile, Eve and Rosalee race against time to get the spell ready before its too late.